The Storm of Time

One moment we were in a raging storm that tossed our Brigantine about as if it were a nothing but a twig, hanging onto whatever we could find purchase on to avoid being swept overboard. The next moment we were carried into this eerily odd calmness that contained a preternaturally thick, sound-absorbing fog that clung to everything and made it difficult to see anything more than a dozen yards ahead. As we sailed deeper into the fog, we saw the ice covered tall masts of ship sails poking up through the fog. The deeper we sailed into the fog, the more we understood that wherever this storm had hailed from was a mystery for it to be able to contain the ships in near perfect condition. There were dozens of ancient ships, and not a few that we simply could not put a name to because we had not run into them before, made of materials we had never seen. These ships were truly out of a different time. Some may have been out of another place altogether as well. There may have been even more ships, simply obscured by the fog that we could not see. We stood there agape in awe at the sight of the ship graveyard.

As the ship’s momentum carried us further and further into the fog, we realized that the temperature had dropped significantly. It was so cold we realized if we were here for any great length of time we would have to find clothing to survive it, as we were not properly prepared for it. But we silently agreed that we would worry about that in a few minutes after we accessed our situation.

Eventually, the ship’s momentum slowed and came to a complete stop. As we peered into the gloom, we saw the nearest ship, a galley. As we stared, humanoid shapes took form. At first these shapes were few. In mere moments the shapes numbered in the dozens. Each of the shapes started at us through the gloom with pinpoints of cold hatred that shone through the fog. Before we had a chance to ponder our fate and determine what these hateful creatures, something shifted in the aether and the wind unexpectedly picked up again, catching the ship’s sails propelling us forward. My crew and I once again scrambled for purchase against the wind and before we knew it, we were out in the storm.

In the hours to come, when the storm finally subsided, we realized that the storm had blown us further off course than we had imagined. By looking at the night’s sky, we realized that we were totally lost, as none of the stars were familiar. We only can hope that we will eventually be able to find something familiar to be able to navigate to familiar waters. I know that I speak for the rest of my crew as well when I say in my log that we hope never to encounter that storm again, nor its freakishly strange ship graveyard.

The Storm of Time is an idea that allows GMs to play with time and location in their campaign while adding the isolation complexities of a zombie survival game. Read on:

The Storm of Time can be described as several things. 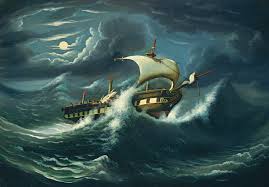 First of all, it can be described as massive storm which can appear on virtually any large body of water, including large lakes, seas, and oceans. It is so massive, it typically doesn’t affect rivers, as most don’t have enough room for it to move around. This storm is so powerful that once a ship sails or a submersible like a submarine into it, it has virtually no hope of escape, as the waters not only on the surface, but underneath the storm are affected in a strange manner as well. It’s so powerful, and so tall, that in a more modern era, even airplanes won’t be able to escape. This combination of power and size can even draw ships and airplanes to it, even those that are trying to avoid its influence. The storm itself never stops, though ships may enter and exit its influence.

Furthermore, despite the fact the storm itself never stops, doesn’t necessarily mean it stays put. But this travel isn’t always typical; i.e. simply moving about the planet’s waterways. The storm may vanish for a time, only to reappear. But those within its confines also disappear. And when it reappears the ships within it likewise reappears. But just because it reappears doesn’t necessarily mean that it’s on the same world. It could even be in another world. Even if the storm stays on the same world, it could transport them minutes, hours, days, weeks, months, or years earlier or later. Where or when the storm travels is at random. 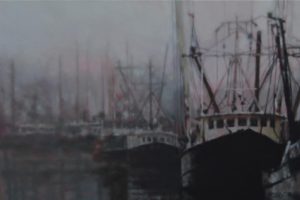 There is a permanent blanket of thick, obscuring fog, which has several unique properties. The first of these is that the perpetual gloom has weird effects on light. Normally, a bright enough of light source should be able to cut through fog. However, in the Storm of Time, the fog either completely absorbs it, or disburses and reflects it, causing flitting shadows at the edge of one’s vison. The second is that the air is inexplicably still. This stillness prevents the fog from being blown away irrespective of any magical or mechanical winds that are generated. Furthermore, no matter the amount of wind generated will be able to allow the vehicles drawn into the eye to escape under their own power, nor are those within the fog able to assist others in escaping its influence. The third is that the fog severely muffles sound, even more so than usual. A noise loud enough that it should be able to be clearly heard the entire length of the ship, or up the masts might be barely heard or as a muffled echo-y noise.

Finally, The Storm of Time can be described as the ship graveyard that the eye collects. Some who have entered into the eye and survived have alternatively called it the Sea of Time due to the wide variety of ships that it has unwittingly captured in its eye. Yet this graveyard isn’t as peaceful nor as dead as it would seem at first glance.

First of all, there are wandering bands of hoarfrost zombies which grow in number with every victim they create.  Hoarfrost Zombies: These zombies seem to be able to move unnaturally fast, despite the extreme cold. They attack by breathing a cone of hoarfrost onto their enemies and grabbing their victims in a vicelike grip and absorbing the warmth out of them. Once the victim loses its battle with the cold, it rises soon thereafter to join the other zombies or create its own band. To use in your game, take a standard zombie, maximum HP and give a cone of cold breath weapon, and a chilling touch attack.

Then there are those adventurers who have been trapped in the storm indefinitely who brave the cold and risk getting eaten by zombies to scrounge for materials and supplies to survive the harsh environment, which can be almost anyone. Some may attack, others may parley, while still others may wish to join up with the PCs to increase their chances of survival.  PCs should be wary though as some wish to join the party only to betray them later on.

In addition to the ships The Storm of Time collected, it has collected a variety of monsters that lurk in its waters. What appears to be an ordinary island in the middle of the Storm’s eye might very well be a sleeping dragon turtle, complete with potentially dangerous inhabitants. Leviathans, Ocean Giants (giants on their upper body and sharks from the waist down), accompanied by dire sharks, swim in the eye, as well as oozes that are almost indistinguishable from the water itself occupy the eye. There are many other monsters that may simply be hiding and waiting for the right opportunity to be discovered.

Characters Challenges within The Storm of Time

The Storm of Time presents characters with several challenges.

The first and biggest challenge the characters face is surviving the storm itself. The storm is a violent storm, tossing ships about as if they are nothing. Even the most sturdy and stable ships struggle to remain upright in the turbulent waters. Characters going through the storm will need to hang onto something, lest they get swept overboard.

The next challenge is the extreme cold and pervasive gloom if they are not prepared for it. They are pervasive, relentless, and piercing. This can be alleviated by using whatever quirks, advantages, skills, feats, spells, magic items, etc. to acclimate them to this. However, it should be noted that because the cold and murk is not something that ever goes away if characters somehow loses this edge to help them face the cold, they will be as vulnerable as if they never had it to begin with. 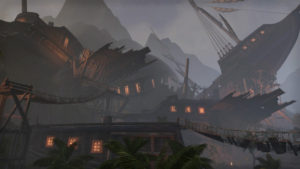 A further challenge are the ships themselves, which are a danger to the unwary. Characters must face the problems of icy decks, brittle materials, dwindling supplies, and wasting energy uselessly. They also may getting lost in the ship’s narrow, maze-like passageways, or get separated from the rest of the party run into the ship’s inhabitants, who may still be on board, or monsters who may have boarded.

The third challenge is, ironically enough, time itself. Characters that stay put too long risks someone or something discovering them they may need to fight off, or, if they are unlucky, that will join them for survival, later on betraying them. Because this is an environment that is cut off from the rest of the world, monsters are always moving. Trying to find a place to rest for 8 hours without interruption is a real challenge, therefore, most of the time it can take anywhere from 12 to 24 hours to regain spells, get in touch with the divine (if it is possible in such a cut off location).

Using The Storm of Time in your game can be done several ways: The first way is as a fleeting encounter, where the character’s ship encounters the storm, face a few enemies and is taken out again, but the legend of the storm is grown, as they are able to tell the tale to others. The second way is as a longer term campaign where the characters make it through the storm’s outer wall to face the dangers of the eye. The goal of this game would be to delve its mysteries and eventually escape, if such a thing is possible. The third way is a rescue mission. A ship has been drawn into The Storm of Time and the PCs must go in and rescue the other ship or die trying because someone or something aboard is vitally important.