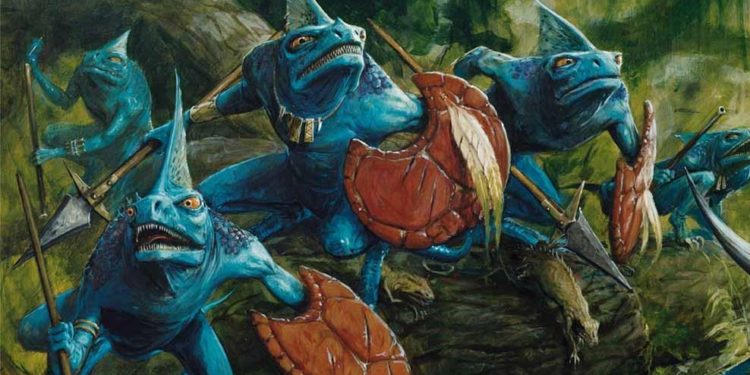 You know Lizardfolk right? Those pesky humanoids who hide in the swamps and ambush your heroic group as they hunt for the Necromancer endboss.

But Lizardfolk can be so much more, oh yes…

Since they are reptile based, you can have aquatic swamp Lizardfolk, desert dunes Lizardfolk, grassy hills Lizardfolk. You can swop their breath water ability for sprinting or blending in.

– Are they all carnivorous or have some adapted to plants hence the upright walking and tool use? This will greatly change the chance for social encounters vs lethal combat.

Lizardfolk tribes may or may not cooperate with other tribes, if they do are they working towards a goal or common enemy. Maybe the reason the military Hobgoblins have not taken over is they’ve been fighting the Lizardfolk across three nations over the last 15 years.

– Are they related to Kobolds, Dragonborn, Troglodytles or even Slaad? are they friends, rivals or perhaps have a non-aggression pact?

Like most creatures that live in the wild 24/7 their senses are keen and unless you are real stealthy they know you are coming. This may mean they are lousy at defending their lairs, so they have skilled patrollers, but once you get past those their lairs are not organised.

– Lizardfolk live on the fringes of regular civilised world, which makes interacting with them ideal for story gateways to new areas, such as a trip through the earth to the centre of the planet, treks underwater to deal with a Merfolk vs Sahuagin war, or flights on spelljammer ships to new planets.

Aquatic Lizardfolk are a great way to have some water based encounters in the game, in a swamp, along the river or on the coast, giving the heroes a taste of a wider environment rather than every encounter being in the woods or dungeon. Athletic tests for climbing & swimming can be a great way to provide variety in the environment.

– Hallmarks of Lizardfolk encounters : They use the environment to hide, hit and run tactics against you to lure you into poor locations, and you will be outnumbered.

Intelligent Lizardfolk tribes will use trip wire alarms, poison blow guns, bolas and noose traps. Leaping on casters from up in the trees or just under the water, while groups mob the armored warriors.

– Lizards are territorial so having them insist on some sort of test of skill before conversation or trading is a good evolution of that.

You can invert the usual ancient species but low magic/tech of Lizardfolk, and instead have them as either skilled in magic, or running around with muskets and pistols.

– Maybe the world changed from Warm Age to Cool Age and the Lizardfolk retreated to the deserts or underground and focused on their magic and technology?
– Maybe the Githzerai or Mind Flayers are training them up as allies in the wars against their many enemies?

Lizardfolk are part of the natural world, they live in the wilds and eat the foods nature provides. This gives them the option to be a sometimes ally to the good nations, if not a permanent member of alliances against destructive evil that trashes forests or the sea.

– During Undead invasions, the Lizardfolk are going to get the same creepy ‘these things are not right’ vibe the rest of it get. Perhaps they even follow the sun deity, and join the crusade against the coming darkness.
– A host of alien insect creatures might be a seen as a threat to all the mammalian species, but are a gourmet smorgasbord for Lizardfolk. The Lizardfolk fearlessly make attacks on the alien nests-formerly towns now infested with thousands of yummy bugs.

An Old Threat: Evil Dragon or Froghemoth has come to the swamp. Lizardfolk will trade maps of a ruins location in return to the heroes dealing with the threat.

Coming Home: The Lizardfolk have fled the Feywild long ago and now seek the Elves aid in returning to their ancient homeland.

Making the most out of Barbarian Rage ...