Warrior Orders and the Way of the Jade Serpent 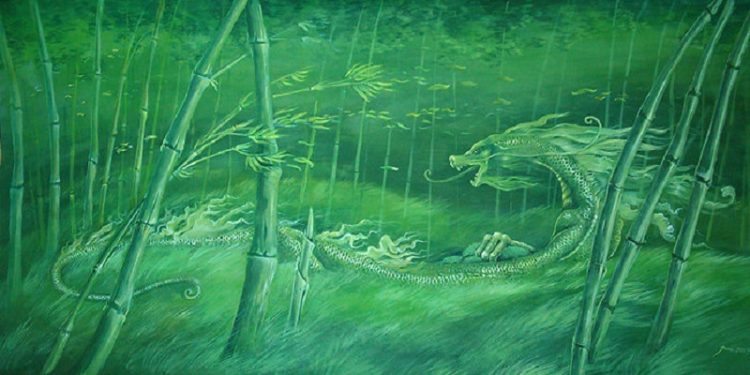 We’ve made it through quite a few classes thus far, with no signs of stopping. Way back when I started this whole drug-addled exploration into a world protected by the Zodiac from the fearsome influence of the Far Realm, I imagined a tense world covered in darkness and snow. Only flickering torchlight illuminates the darkness, casting deeper shadows on everything the light doesn’t touch. There are roars and screams in the darkness, and it is worth more than your life to investigate the cause. The world is struggling to find a way to survive against nightmarish alien incursions while continuing to struggle for their wants and desires. In such a world, it makes sense that there would be different orders or schools dotting the land for those studying martial pursuits. Nobles looking to expand their influence would leverage these schools, and encouraging competition and dominance over others outside their control. With all this in mind, let’s take a closer look at Warrior Orders and the Way of the Jade Serpent.

Previous Discussions: The Zodiac and the Celestial Sorcerer | Aberrations and the Circle of the Zodiac Druids | Dendar the Night Serpent and the Path of Nightmares Barbarians | Living Stars, Blazozoids, and Zodiac Patron Warlocks | Singing Stars, Erinyes, and the Bardic College of Kindly Song | Bitheism, Clerics, and the Service Domain | Superstition and the Starscarred Fighter

One of my favorite books of all time is Musashi by Eiji Yoshikawa. Sure, it’s over 900 pages and carries that distinct Japanese literature style – one I obviously love – but it’s an absolutely phenomenal work of historical fiction. Miyamoto Musashi is a great figure to tell stories about, thanks  room for fictional expansion due to the era in which he lived. Facts aside, large portions of the book are dedicated the battles and duels of Miyamoto Musashi. As you might expect, this speaks to the traditions of Japan

Japan has a rich history of martial arts, particular during the years of the samurai. Skilled practitioners would create schools dedicated to a particular style of martial arts – sometimes several schools were created by the same person – and students would sometimes learn at several different schools before opening their own school. Duels were frequent as each school, as each wanted to prove it was the best. This is particularly true from the mid-1500’s through the 1800’s, but by no means is the the only time frame this existed. I’m not an expert so I’ll just leave it at that.

We still see a lot of this existing through to the modern day thanks to the rise of combat sports. If you look way back to the early days of the UFC, the core of the fights revolved around pitting different styles of combat against each other. You might see a boxer against a greco-roman wrestler or a practitioner of sambo versus against a student of Brazilian Jiu Jitsu. As the years have progress, you see gyms forming their own styles of training that incorporate a mix of styles like boxing, krav maga, muay thai, judo, and savate. These gyms often develop into fight stables, with fighters from the same gym competing at different weight classes – or even within the same division. When a fighter leaves one gave gym or trainer for another, there tends to be a lot of bad blood that follows – creating instant drama and tension. Not so far removed from the days of samurai dueling each other to prove they were the best, when you think about it.

The Evolution of the Martial School

It’s probably not a surprise I am not a mixed martial artists – even though I am a fan. Luckily, I have quite a bit of experience with warrior orders when it comes to games. The concept has existed for years within the family of LARPs that Dust to Dust was run under. The family of games began life under the Chimera Interactive production company, before evolving into Rule of 3 Productions.  Prior to this family of games, most LARPs in the area didn’t offer a lot of options for people who wanted to be weapon-focused. Fighters could do more damage as they advanced in experience, and got a small amount of physical defenses along the way. That was about it. As time wore on, fighters began to get a wider area of offensive tricks – disarming weapons, breaking weapons and shield, piercing armor, etc – but all fighters were more or less the same when it came to combat. Individual characters had a lot of variation – this family of LARPs is skill-focused and not class-focused – but combat progression and performance were more or less the same across the board.

The Rule of 3 Family of LARPs

The second generation of games within this LARP family developed the idea of martial schools. In their initial iteration, these martial schools gave you additional skills at the – often lossy – cost of your existing skills. Each school required you to use a different style of weapon – sword and shield, a two-handed weapon, bows or crossbows, etc. – wear different types of armor – none, light, medium, and heavy – and you could only be in one school at a time. You learned skills specific to your style that were not available through any other means than advancing through the schools. Subsequent games in the lineage altered this to offer additional skills through progression, but at a cost that would compete with advancing as an undisciplined fighter. Neither approach is better than the other – in my opinion, and each has its pros and cons.

Martial Schools at Dust to Dust

In Dust to Dust, we had a large number of martial schools – though we called them warrior orders, instead. The Dane’s Bulwark were centered around being bodyguards, the Shieldeaters were wild berserkers, the Sand Spire were spear users that fought ghuls and alchemists, the Displaced Hand were performers that secretly learned thrown weapon and bow skills, and the Silver Swordsmen were nobles who taxed the peasants in silver in order to craft weapons that protected them from the shadows. There were many more, but each was rooted in a specific style of combat and was in service of the world itself. These warrior orders often had friendly competitions with each other to prove their style was superior to the styles of others. We worked hard to highlight all of the warrior orders in the story, to varying degrees of success.

Warrior Orders and the Way of the Jade Serpent

It’s only natural in a world on the constant edge of invasion that myriad schools would develop. The schools exist in both cities and in the wilderness. Some openly advertise to gain students, while others are passed only through whispers and word of mouth. Monasteries are a natural fit for warrior orders in this setting, as each would practice its own form of martial arts with their own themes, beliefs, and martial techniques. This isn’t exactly the most revolutionary idea, but it is one that fits the themes and concepts of the setting extremely well.

If you have read any of the series, you’ll find more than one reference to jade and serpents in the works. This is intentional, given the theme of stars, oracles, and cosmic entities. I could certainly see a tale where the other members of the Zodiac sent the Jade Serpent after Pravos to prove his worthiness before he took to the stars – long before the people of the world appeared. Pravos marshaled his forces against the Jade Serpent and defeated it. He laid claim to the title of Jade General, and took his place beside his Zodiac brethren. In such a setting, a school themed after the Jade Serpent would have a rich history to draw upon, and is something of a no-brainer to include. Even more so if you apply that to the sort of martial mystic that is the monk class as a whole.

Way of the Jade Serpent

Starting when you choose this tradition at 3rd level, you have mastered the sign of the Jade Serpent, imbuing you with lightning. You gain a ranged spell attack that you can use with the Attack action. The attack has a range of 30 feet. You are proficient with it, and you add your Dexterity modifier to its attack and damage rolls. Its damage is lightning, and its damage is a d4. This die changes as you gain monk levels, as shown in the Martial Arts column of the Monk table.

Breath of the Jade Serpent

At 6th level, you have learned to manifest the breath of the Jade Serpent. As an action, you may spend 2 ki points to breathe a cloud of poisonous gas in a 30-foot long and 5-foot wide line in front of you. Creatures caught in this cloud make a Constitution saving throw. A creature suffers 2d6 poison damage and becomes poisoned until the end of your next turn on a failed saving throw, or half as much damage and is not poisoned on a successful one.

Presence of the Jade Serpent

Once you have used this feature, you may not do so again until you complete a long rest.

Heir of the Jade Serpent

Once you have used this feature, you may not do so again until you complete a long rest.