Craig Campbell of NerdBurger Games, the creator of Murders & Acquisitions and CAPERS RPG, is with us again today to talk about his newest game, Die Laughing. It’s a horror-comedy game with a film-making conceit, and it went live on Kickstarter on October 30th. Check it out! Then come back and read this interview with Craig.

What is Die Laughing? Who is its target audience?

Die Laughing is a short-play, GM-less horror-comedy tabletop RPG. Everyone portrays characters in a horror-comedy movie, and everyone is going to die (probably). It’s all about figuring out when your character will die and making their death as funny as possible. After your character is gone, you become a producer on the movie and continue to influence the story and mess with the other characters through the end of the game.

It’s targeted to the tabletop RPG crowd, certainly. Though, I think it can work well as a party game even for people who aren’t terribly familiar with RPGs. It’s sort of a hybrid between traditional RPGs and story games like Fiasco. You have a character sheet with stats and a few cool abilities. But the game play is very narrative focused and improvisational.

What were your core inspirations for the game?

Beyond that, I’m a huge horror movie fan. The game draws inspiration from a wide variety of horror and horror-comedy movies, from classics like Halloween and Dracula to B-movies and cult favorites like Return of the Living Dead and Them!

Producer gameplay is definitely something that sets Die Laughing apart from many other games. How did it get conceived and developed?

This game went through a bunch of iterations before the moviemaking aspect became part of it. I was searching for ways to give players something to do after their character dies. Honestly, the producer thing – in fact, the whole “make a movie” thing – just sort of appeared in my brain. With that idea in place, the rest of the game fell into place pretty quickly.

Were there any big changes to the concept or mechanics in the course of development?

Nothing big. The core dice system is so lightweight that it pretty much worked as intended from the start. Mostly it was a matter of tweaking all the little individual character rules, the things that set different characters apart from each other.

Tell us about one of the best Wraps from your playtests.

For the reader, “wrap” is the term used for when your character is gone. They might be killed. They might be transformed into a vampire or zombie. They’re wrapped, as in, “That’s a wrap for Chelsea.”

There was one game where one of the players portrayed their character as an arrogant jerk throughout the story. At one point, it looked like they were on course to be the surviving character. But a few bad dice rolls resulted in it coming down to their character and another (nicer) character. In the end, their character got wrapped first and they described how their character had a change of heart and sacrificed themselves to save the final survivor. It involved a lot of fire. And screaming. It had some funny in it but it was also surprisingly touching.

Thank you for your time, and good luck with the Kickstarter!

Thanks so much helping me bring Die Laughing to the masses.

Check out the character and monster sheets! 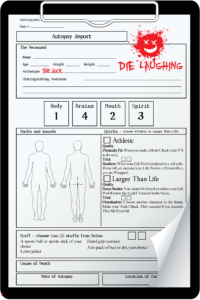 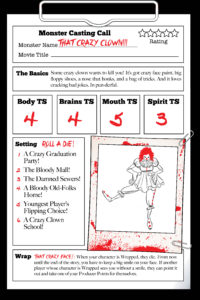 The Kickstarter for Die Laughing! runs through November 21st, and has already funded. Join in for stretch goals! 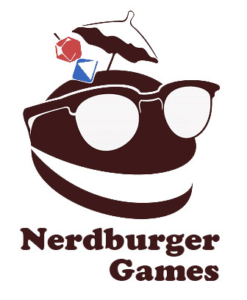