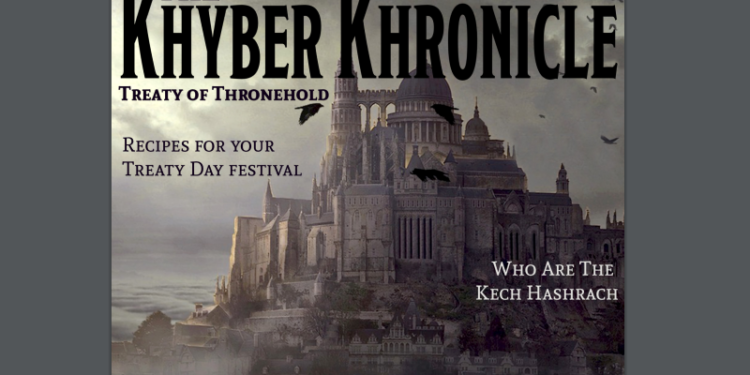 As you know, Bob, it’s open season for Eberron content in the DM’s Guild. Today I’m reviewing Khyber Khronicle, Volume 3, by Mount Ogden Gaming Company. I received a free review copy, and I heard about this product in the first place because one of the writers, Jeremiah McCoy, is one of my good friends. He’s already heard my critique of his article, so I don’t think I’ll have a problem being objective-yet-compassionate – the balance I always strive to adhere to in my commentary.

You’re looking at $4.95 for 11 articles. Even if they’re not all your speed, assuming a standard spread of quality, we’re talking about less than 50 cents per article. Those are good odds of getting commensurate value out of this, sight unseen. With this much content, I won’t be giving anything a deep dive.

Treachery on the Line

First up is an adventure for 3rd-level characters, by Jay Africa. What someone else calls a two-hour adventure is probably an evening or two of play in the groups I’m used to. It’s two Acts long, and it’s not at all difficult to imagine my groups stretching this out to fill the time allotted, whatever that might be.

My only quibble with Act I is that there’s a rumor-gathering section, really the players’ only chance to investigate anything, and they get a bunch of rumors – half of which are false. The text calls out that they have nothing to go on in determining truth, so I think even including falsehoods serves no positive game-running outcome. My general advice is that red herrings such as communism are greatly overrated in game-running, and you need to think very hard about what purpose misinformation will serve. If you do give players ways to separate the truth from the bullshirt, then… okay.

Act II is a very brief chance for interaction, followed by the climactic fight. The adventure proposes that players might either side with the assassins (for some fairly reasonable ideological purposes) or fight them off. There’s a separate section on NPCs that intervene and make your lives hard if you decide to kill the NPC.

Beyond my criticism of the rumor table and some minor editing slips, the adventure looks pretty strong: good use of classic pulp/noir scenery and themes, the Truth parts of the rumor table hit a lot of good notes, the cable car is great, and so on. If you’re playing Keith’s “classic” Eberron that strictly bans gunpowder, you’ll need to tweak the encounters so that there are wands instead of pistols – entirely trivial. The denouement and follow-up sections work particularly well, and this adventure could readily spark off a whole campaign.

If you’re interested in the gunslinging goblins of the Kesh Hashrach, well, stay tuned. There’s a whole article on them in this issue!

Thronehold: The Once Great City of Galifar

This article summarizes the role of Thronehold and the Treaty in Eberron (even shorter version: They’re a real big deal). It discusses the Sentinel Marshals of Deneith with a few paragraphs. Finally, there’s a map of Thronehold and Throneport, with a few locations that sound like fun places to run scenes. This article is brief and I’m not completely sure how much of it is new, but it’s basically fine. It’s enough lore to spark ideas for stories, anyway.

This article offers eight new backgrounds, in a very tight two-page layout. The formatting and editing don’t maintain the standards shown elsewhere in this issue; several backgrounds don’t have (or have space for) Suggested Characteristics, and none of them offer new personality features. The ideas are fine, and I particularly like Sentinel Marshal and Aspirant of the Becoming God, but overall this needed another 2 pages, maybe more, to stay at an easy-to-read font size and include all of the content one expects from a Background.

This is a bunch of stat blocks for types of NPCs you should expect to encounter all the time in Eberron. Great goal! But there are some problems in the execution: you’ve got to buy other products to know what some of these spells and creatures are, and there are editing problems. It’s clear what they meant, but it looks bad. I’m less than thrilled with some of the choices made here. Overall, it’s not bad, but I’m not thrilled with it as I could have been. (In fairness, WGTE not having an Official Artificer makes Eberron content a lot harder to produce.)

This is a mostly-in-character cookbook entry, with three “recipes” (some of which can be interpreted for real-world use) that, if consumed, add up to a heroes’ feast. This is an amusing sideline and a suggestion for using cooking components as story hooks. It’s a fun, short piece that hooks into the Treaty Day (Thanksgiving) theme of the issue.

This article offers one wizard school (as the title suggests) and three feats.

Look, I am super sick as I write this, the changing weather has taken a terrible toll on me in the past week, but unless I’m overlooking something… I think this school is a rousing success! It takes some thought to use well before 14th level, because its big thing is storing spell slots in wands – but that means you might be able to prepay a slot into a wand. The spell stays stored in the wand for 24 hours, so you spend it, then finish your long rest. Its 14th-level feature is very good, but not at all out of reason. There may be some corner-case exploits, especially around lending out your spell-storing wand to an Arcane Trickster, but I think the worst-case situations are still probably tolerable.

Wandslinging Initiate looks like a modest improvement on Magic Initiate, except that your spells can only come from the Wizard list. If you were serious about using your feats to fake a wizard multiclass, buy both.

Wand Fighter lets you make force-based melee attacks with a wand, which is an interesting way to go. I doubt that even many Eberron characters would find this helpful, but maybe there’s a character-building approach I’m missing.

Arcane Parry – at least, I think it’s a separate feat, it’s unfortunate that a minor header-tagging error can confuse the issue – lets you block incoming attacks by spending a wand charge. I wouldn’t implement it like this – I’d imitate the parry functions found in Defensive Duelist – but the idea is interesting.

Overall, the School of Wandcraft portion is more than good enough to balance any softness in the feat design. I’ve said it before and I’ll say it again: feat design is crushingly difficult to do well. (Ask WotC. Their feat-based UAs are as much miss as hit.)

The Myconic Labyrinth of Xoriat

This article is a two-page description of an adventure location: a passage from Eberron into Xoriat if, Silver Flame help you, you should want to do such a thing. There’s one place where the wording of the hazard is not quite clear, and I wish there had been a few more suggestions of what kinds of monsters inhabit this cave or what mechanics might govern navigating the labyrinth (is it actually unicursal?), but beyond that, the article is great. I’d use it in my non-Eberron campaign, with minimal changes. The table of hallucinations is well-done.

Aganazzar is a canonical wizard of the Forgotten Realms, of whom even Chris Perkins knows very little (as demonstrated in a Dragon Talk “Lore You Should Know” segment some time back). This article offers an expansion of that lore, painting him as a wizard of Eberron and the creator of several spells of convenience. These kinds of spells have their fans – they probably are things people would want if magic were real – but it’s hard to imagine a PC spending the spell preparation or the spell slot on any of these. The magic items would be more appealing, as their charm comes at no expense to the player’s gameplay resources.

The editing errors in this article are a bit more significant, with some incomplete sentences. Overall the article doesn’t have a lot to offer me, but it’s okay.

In this article, Jeremiah presents a specialized ranger subclass that hunts down criminals. The core difficulty is that they have only one feature that works on anyone other than their criminal Quarry, and even if you’re running a criminal-investigation campaign where this is common, you won’t have active features until you’ve got a guilty party picked out. In a campaign that embraces what this is about, it’s probably a lot of fun.

The text could use some additional editing support, and some tightening up of formal rules language. I think the first piece of No One Escapes the Hunt could use some benchmarking, and maybe a consideration of whether higher-level slots have greater effect.

The theme is good. I don’t think we see that many places where the state powers of Eberron collaborate with the fey, and I would enjoy unfolding that story further in the course of a campaign.

This article is a single-page collection of four feats. As elsewhere, some more editing care is called for, especially in formal rules language. Shifted Strike is my favorite of the bunch, as it makes sure that shifters can deal unarmed strike damage when nonmagic-resistant or nonmagic-immune creature show up.

Next up is an extensive riff on one of Keith Baker’s (may he be hailed and feared) blog posts on firearms in Eberron – specifically, in the hands of goblins. The lore section here is great, and it’s followed up with a whole bunch of gunpowder-based goblin, hobgoblin, and bugbear stat blocks. I have only the tiniest of quibbles with these – taken together, they’re fantastic. (My quibble is that I don’t like the way Multiattacks are phrased.) What’s important is that they’re distinctive in their style and look. I do expect PCs to have more than a little interest in capturing the guns and bombs that these goblinoids wield.

Oh right, there are also riding animals used by the Kech Hashrach, a riding lizard and a war bear. These are fine and good.

If this article doesn’t make you want to roll up a goblin gunslinger as your next character, I’d be surprised.

Taking it all together, this is a lot of content for your $4.95. The best parts are flat-out excellent; the weaker parts aren’t deal-breakers, I just wouldn’t use them without some rewrites. Editing (copyediting and rules-language edits) needs some work, but as someone who’s done that work before, well, it’s easy to miss stuff on a tight deadline.

If Eberron is your deal, you should check this out. It’s covering a lot of different areas of Eberron lore.

Blood moon, and other chaotic events for ...