Brief Description of 5e Classes and Subclasses (Ideal to Show to your Players), Part 2 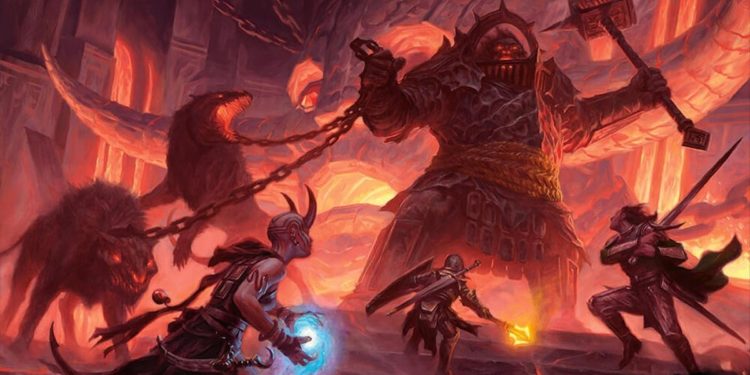 “New year, new me”, as the phrase says. It’s about time you create a new Player Character, be it for a new campaign, or to archive in case you have a spontaneous chance to play it. However, with the great variety of classes and subclasses that exist, it’s really difficult to choose. What’s more, subclasses can enormously change their perspective on the class, making them more or less interesting for you.

What does a fighter do best? Well, fight of course. A really versatile class, as it can work in numerous ways. Add the fighting style and you can choose to have a one handed weapon accompanied by a shield, have a two handed weapon, two one handed ones (dual wielding), a ranged weapon and more! Once you’ve got that decided, ready yourself to start demolishing your foes, be it with your mighty strength or dexterous precision!

These fighters got to learn a unique elven archery technique. By doing so, they can infuse different types of magic to their arrows, both damage dealing ones, and others that leave some effect on your foes.

The name says it all. Fighters trained this way can develop numerous abilities to be the best in their fighting style. They can learn how to incapacitate their foes, deal heavy damage, or bolster their allies in battle.

If you don’t like the Paladin class as the classic European cavalier, this is the closest thing to it. An expert in mounted combat, and an amazing tank too. They get great mobility due to their mount, but can have some abilities taken from you if you can’t use your mount (e.g when going into a cave or dungeon)

Fighters from this subclass tend to find their enemies’ weak points and exploit them more often than the rest, allowing them to do double the amount of possible critical attacks. If you are looking to play a fighter and the others subclasses overwhelm you with things to learn, this one is your best choice.

Do you love a specific weapon but would like to be able to also use magic? Eldritch Knights use a special kind of martial archetype that allows them to use magic to buff their attacks or gain battlefield control. They can also summon their weapon when they don’t have it at hand. How cool is that?

Knights of the crown, these are the kind of fighters who try to find a way to solve a conflict through words when possible. They work really well as support fighters due to their ability to heal allies in combat through their second wind feature.

You ever wanted to play a Samurai in 5e but were tired of having to make it work with the existent classes and subclasses? This martial archetype for the fighter was created just for you then. Samurais concentrate so hard they can find the right spot to hit their enemies (granting them advantage in lots of attacks). Grab your katana, bow and arrow or whatever you like and start wreaking havoc like the tankó wearer damage dealer you are.

Martial artists who can channel their Ki to do impressive feats as if they were magic users. No armor is necessary, just dexterity and the power of your mind. Deflect missiles thrown at you, changing the target to your enemies, move at the speed of the wind and fill your foes’ faces with a flurry blows.

Way of the Drunken Master (XGtE)

Get ready to feel like Jackie Chan, because that is what this subclass is about. Monks from the way of the drunken master love their fighting like they like their ales. They have a style of fight that is different to many others, allowing to be super dexterous and agile.

Way of the Four Elements (PHB)

Due to their connection to nature, these monks can concentrate enough they can use certain elemental spells by using their Ki. Get ready to become a The Last Airbender or Legend of Korra style monk and do some elemental control.

Way of the Kensei (XGtE)

Monks trained this way see their weapons as extensions of their own bodies. They do this in a way that these weapons work as if they were magical. Moreover, they can choose to master ranged weapons, dealing even more damage from afar.

Way of the Long Death (SCAG)

Death isn’t a concern for these monks as they learned how to survive when knocking on heaven’s door. They know how to steal life’s essence from dying enemies and create a fear of death in them.

Way of the Open Hand (PHB)

The classic martial artist, fist punching, jaw breaking kicker. With their flurry of blows they can unstabilize their foes, as well as deal some heavy damage with a succession of hits to their faces.

A true ninja delving in the shadows, ready to make surprise attacks, teleport, and cast spells in order to create strategic ways to kill or assassinate their enemies. Make illusions show up to distract, create magic darkness to go unnoticed and slash that guard’s throat.

Way of the Sun Soul (XGtE)

Through lots of training, these monks discovered how to channel their own life’s energy to shoot it as bolts of radiant damage. This energy can also be used in other ways such as for creating flames, making use of your own soul’s power.

A paladin is a person guided by an oath, their force of will and devotion so strong they are granted the ability to cast spells to smite their foes. They fight for justice and righteousness, with the idea of following their oath and ideals to the very end. For this, they use heavy armor to be front liners and protect their allies.

Oath of the Ancients (PHB)

Paladins who swear an oath of this kind value the good in the world, trying to reinforce it in people’s lives. Nature and light are hugely important to accomplish this, meaning they are trained to make use of them for good and maintain justice, as well as to smite evil.

Law must be obeyed, and you are the law. Oath of Conquest paladins believe hope should be extinguished from their foes’ minds and that people should be ruled with an iron fist. This is survival of the fittest, and should you not become strong enough, you are to be stepped on.

Oath of the Crown (SCAG)

These paladins swore to protect their king and kingdom they live in. In order to maintain justice, the law must be respected and you only should speak truth. They are natural leaders and will defend their allies as well at all costs.

Their oath makes them trustworthy companions ready to take a bullet for you if needed be. These paladins swore to protect the weak, and slay evil, while being compassionate with those that don’t truly deserve death. You are to set an example to others and inspire them to follow your path towards a better world.

There are very few examples of creatures that are beyond saving when it comes to redemption. Peace must be set in the world and for this you must learn to forgive even the evildoers. With patience and wisdom, you can make others find the good in their hearts and become a true emissary of peace.

Something happened that made you swore vengeance against someone of a group of creatures, be it devils, demons, goblinoids, or the local crime boss. There is no mercy for the wicked and nothing is going to stop them from fighting the greater evil.

You commited the worst thing a paladin could do: you broke your oath. You are beyond saving now, and have turned into an undead summoning, maddening creature. Filled with hate these paladins went out of their mind and are on their way to becoming life’s new ruler.

A natural explorer seeking adventures, who on their way found a special hatred towards a certain beast or monster. Able to master any fighting style as long as they don’t involve heavy weapons or armor. Spellcasters by default, due to their connection with nature and/or the Feywild, they are excellent scouts and allies to have by your side.

You want to play having an allied pet you can rely on by your side? This is your best bet. You’ve found a way to create a magical bond with it making you able to command it at will. When not ordered to do something it will do its best to protect you and stay alive. If it is to die (let’s hope not) you can always befriend another beast by spending some time with it.

An ambusher at its core. Rangers of this kind are truly a menace to whoever isn’t very aware of its surroundings. A shadow in the dark, used to seeing and moving in the night. An excellent assassin too, made to work greatly as a sniper with its bow.

A planar traveler, discoverer of ways to travel from one place to another, or just to momentarily disappear from the current one they are currently travelling. Curious explorers wanting to know more of these places, or prevent others from going in for all the dangers they’ve survived getting to where they are.

You’ve trained all your life for this moment. Time to hunt the ultimate prey! Get your weapons ready and let’s kill legendary monsters. They are masters of the hunt and evasion if their prey gets too close. Excellent fighters both to hunt down single enemies, or groups of them.

While hunters train to be able to excel in both single and horde combat, monster hunters center their attention towards one specific enemy in the battlefield. Once a monster hunter laid eyes on you, you better start praying to all the gods above, cause a huge number of projectiles or slashes are coming towards you.

Vodari – Swashbuckling & Sorcery on the ...