The Warlord Class, Part One 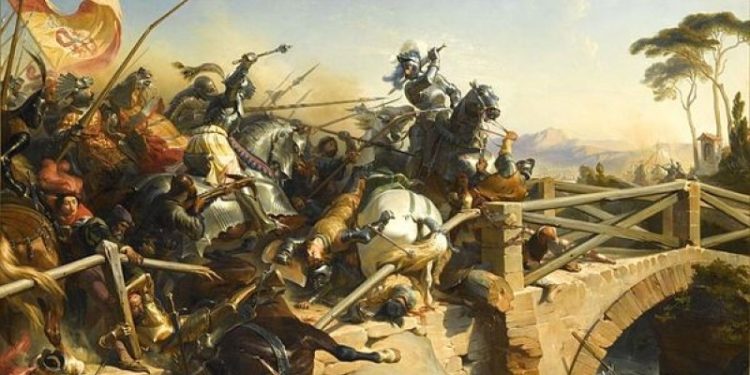 This will be one of the shorter class histories, as the warlord only arguably exists in editions that are not 3.5 and 4e. In today’s article, I’m exploring that argument in pre-3.x with the books I have on hand; as with the rest of the History of the Classes, it’s possible I’ve missed something from a Dragon issue or a setting supplement along the way.

In these editions, fighters and other classes often receive battle-ready followers somewhere around 9th level, as the game shifts from “typical” adventuring to kingdom-building. (“Typical” adventuring seems to be a narrower concept in OD&D and 1e than in later editions, but I have no personal experience here.) I’ve already covered the fighter class and the domain management rules in those editions.

In the non-gaming sense of the term, they’re warlords as soon as they attract soldiers and start using them to throw their weight around. In the sense I care about for this series, of course, they’re not warlords at all: they have no features that provide leadership-like benefits in squad-scale combat. At best, they have a lieutenant who is a bit lower level than they are. This might be regarded as turning the fighter into a pet class – you give orders to another character (an NPC), and they help you stab things better.

The core of the fighter class (and paladin, and ranger) is still the same, and I don’t see any nonweapon proficiencies that sound too much like squad-scale leadership. Thematically at least, the Complete Fighter’s Handbook offers the Myrmidon kit (a soldier’s soldier) and the Natural Leader personality. The mechanics on the Natural Leader are… just a scorcher, folks. Because you want to be a leader in combat, the DM is encouraged to assign penalties to attack and damage rolls if you’re not spending the first few rounds telling your allies what to do (which most players won’t appreciate in the first place).

Let’s move along to Skills & Powers. It’s still slim pickings, but the point-buy fighter class features offer several mass-warfare features to help you be that kind of warlord: Building (for making siege engines), Followers (two versions: the one from the Player’s Handbook and one that lets your warlording start at any level as long as you have a stronghold), Leadership (“ability to lead in battle”), Supervisor (supervising defensive construction – the core of combat engineering); and War Machines (for using siege engines). It’s a whole lot of making you decide at character creation that you want to trade squad-level combat potential for mass-warfare combat potential. I sure hope you talk to your DM at length before making this kind of decision.

DUNGEON MASTER Option: High Level Campaigns offers a bunch of new features that characters of 10th level and above can buy, based on their class group. I’ve always meant to give this book a deep dive; it’s such an odd bird in mid-to-late 2e development. Anyway, some of these cross the line into making warriors into squad-level leaders, particularly Sense Danger.

The leap of logic that ultimately creates the warlord doesn’t exist in 2e’s dynamic: morale is worth a bonus to hit and/or damage. There’s something perversely fascinating in the idea that the DM should hand out penalties for failure to play to a stated personality, with no suggestion of a bonus when you do. It’s the logical opposite of PBTA’s “the ally receives +1 forward when they act on your advice.”

The one notable item here is the Leadership feat, which grants a cohort and followers. You have to be at least 6th level, it’s open to any class, and it rewards a high Charisma score. As I said of earlier-edition fighters, it potentially turns any class into a pet class.

And that’s it. I’m not sure the various auras are compelling enough to go through individually. On one hand, there’s no mistaking that this is a key precursor to the warlord. On the other, it doesn’t satisfy some basic 3.5e design precepts, like no dead levels please. As with many 3.5e classes, especially Miniatures Handbook classes, it’s too stingy with features. Mathematical improvement is most of the satisfaction you’re going to get.

As an aside, the rest of the Miniatures Handbook gives the impression – possibly just a coincidence – of being a stronger influence on 4e than many 3.5e books that came later. The focus on minis and grid combat is even greater than normal for 3.5 (because it’s introducing a squad-scale minis wargame), and many of the monsters that do make it into 4e show up here for what might be the first time (but I’m not fact-checking that).

Back when I covered Bo9S for the History of the Fighter, I mentioned that the White Raven style strongly presaged the warlord. Just about every White Raven maneuver is recognizable as a 4e warlord power, whether in broad terms or specifics. I don’t think that going through every maneuver individually makes for interesting reading, though. This style is available to crusaders and warblades (two of the Bo9S classes), but not swordsages for whatever reason. There are swift-action boosts to allies, stances, and strikes that rally allies or hinder the target. What’s significantly missing from the 4e warlord’s feature set is healing – 3.5 firmly rejects fast nonmagical healing and categorizes White Raven as nonmagical.

Again with things I’ve previously covered in the History of the Fighter. Since I’ve already covered the hunter in as much depth as I think you’ll enjoy reading, let’s take a quick look at the War Leader feat chain, within the Tactical category. Keep in mind that the token pool described here is separate from the hunter class token pool (tactical and strategy are different. They’re not even the same part of speech, gawd), and both of them are unapologetic action hogs. I’m skipping the details around how you get these tokens, though – I just want to look at their throughput. It’s a ten-feat chain, so:

Especially in combination with the hunter class features, this is a 3.x-adjacent warlord. There’s no instant healing, but hunters have access to the Healing Lore feat (from their Lore feat mastery), and everyone has out-of-combat self-healing in Iron Heroes (a mechanic that prefigures 4e’s healing surges, and thus 5e’s Hit Dice). Released in ‘05, it has one key problem that Bo9S solves in ‘06: how do you make the tactical leader part of the action, rather than making them stand back and call out bonuses for other characters to do stuff? I don’t know for sure how much this book factored into the creation of 4e’s warlord, but it feels like a key step in the conversation following 2003’s Miniatures Handbook.

That’s it for this week. In the next History of the Warlord article, I’ll be covering one of my favorite 3.5e deep cuts: Green Ronin Publishing’s The Black Company, which includes the noble class and the topkick prestige class. If you have other warlord-related content that predates 4e (including Pathfinder material, even if it was published after 2008) that you think I’m overlooking, let me know in the comments!

I’m aware that there’s a noble class and commander prestige class in the d20 Wheel of Time book. In the way of things one hasn’t needed even once in the last 15+ years… now that I do need it, I can’t find my copy. Maybe it’ll turn up by the next time I’m writing an article in this series.

Vodari – Swashbuckling & Sorcery on the ...