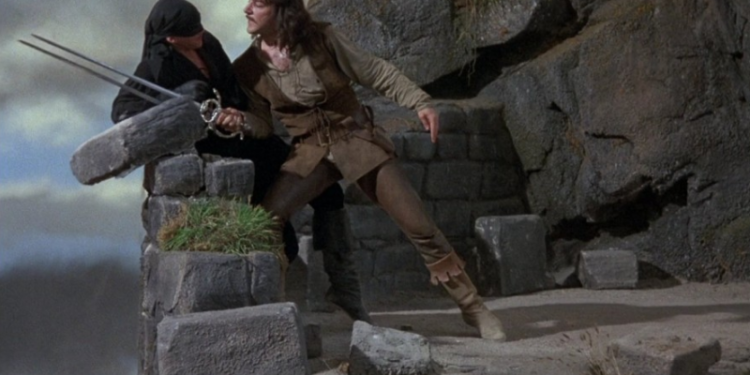 Way back in February of 2013, during the heady days of D&D Next, I created the Give Ground rule, a reaction that is available to all creatures, and posted it in Harbinger of Doom. That was back before any of us knew what 5e’s formal rules language would look like. My group has used this rule steadily since then, so today I’m cleaning up the phrasing and offering it here.

As a reaction when you take damage from a melee attack, you can move 5 feet away from the attacker onto non-difficult terrain, reducing the damage you take by 1d6. This movement doesn’t provoke opportunity attacks. If this reduces the attack’s damage to 0, treat the attack as a miss.

The attacker can immediately move into the space you evacuated. This doesn’t cost the attacker’s reaction and doesn’t provoke opportunity attacks, but a creature can only move this way once per turn.

A clarification, technically intrinsic to the rules above: If none of the three squares behind you that increase you distance from the attacker are legal places to end your movement, you can’t Give Ground (even if you could otherwise pass through the square, such as when occupied by an ally).

This does slow down combat slightly in two ways: first, that there’s an always-available reaction to take (so more to think about), and second, that both sides can slightly mitigate melee damage, and thus stay up a little longer. On the other hand, players seem to really like having even a minor desperation move to mitigate critical hits and the like, and thinking about how you’ll spend your reaction each round keeps attention focused on the game even when it isn’t a given player’s turn. It also feels good to have a way to use your reaction if no one on the field is provoking opportunity attacks.

There are several other damage-mitigating reactions in the game, and I’m pleased for this new option to be less powerful than any of them – it costs you both your reaction and tactical position, and only stops 1d6 damage. The Parry maneuver starts at 1d8 + Dex and doesn’t cost position – so at least in my imagination, the contrast between these two emphasizes the cinematic hard block and digging in your heels of a good parry. Likewise, Uncanny Dodge halves the damage without sacrificing position.

I’m aware, of course, that sacrificing position doesn’t always matter – there are plenty of fights where 5 feet one way or another won’t matter to anyone. If you’re playing on a grid, though, you’ll sometimes run into situations where it matters a lot – where giving ground lets the attacker target someone more vulnerable with their next attack. This creates a dynamic where a defender makes a conscious choice to hold position and take the full damage – even though it’s only not reducing by 1d6. That’s a minor moment of choosing to be a hero in the normal course of your round.

I thought about ways to give a similar option to ranged weapon and ranged spell combat. Melee combat is the majority of play in groups that I’ve played in, so the absence of parallel options hasn’t been a problem. (You can buy a somewhat similar option for spells that force a Dex save, with Shield Master.) If I ran a campaign where ranged combat started to seem overpowered, I’d introduce a Fall Prone reaction – since falling prone is mostly bad for you, but ranged attacks from more than 5 feet away have disadvantage. If you want to hit the deck when you get declared as the target of a ranged attack… that’s probably okay. For spells that force a saving throw… I don’t have a solution ready to go, because my experience doesn’t show that that’s needed.

Also, the 1d6 matters less and less at mid-to-high levels. I don’t see that as a problem, since PCs are also picking up more exciting things to do with their reaction. Working As Intended. On the other hand, you’re probably surviving slightly more hits, so that could be more d6s that you get to roll and a greater chance that you’re surviving an extra hit or two.

This rule has done good things for my game, and I hope you’ll try it out as well!