How to create Enemy Champions on a whim 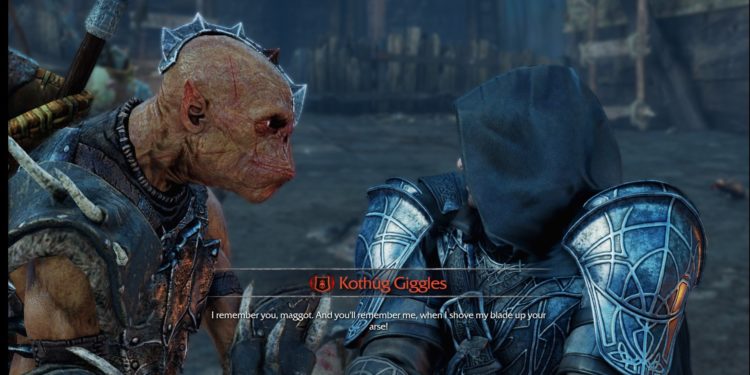 Thumbnail image from the Shadow of Mordor videogame

Tarret the cleric and Spike the rogue continue their travel through the Highpeak Mountains. 3 orc hunters jump out from the bushes and initiative is rolled.

Spike goes first stabbing the closest orc with his dagger. His blood pours out from the side as he tries to get hold of it with one hand.

The orcs gang up on the cleric, two of them hitting with their greatclubs.

Tarret gets away receiving one oportunity attack and casts Spiritual Guardians. A yellow aura emanates from his position covering the whole area around him. 4 angelical transluscent figures stand in it, looking at the orcs.

Round ends, and Spike goes again…

Exploration, Social Interaction, Combat. These are the 3 Pillars from D&D. They normally work separately and don’t merge much, but when they do… That’s when some of the best moments appear in the table.

What do you think about the combat scene I wrote above? In my opinion, that’s what most combats look like (or at least the ones I’ve seen and run). Players want to feel heroic and know the details of their actions, but don’t care as much for the ones typical monsters do. So, for speed measures, you as a DM only fully describe the players’ actions while leaving the enemies’ ones aside. However, this makes most combats dull, especially if they are just random encounters.

Our intention, though, is to add more Social Interaction and roleplaying aspects to our combat. Therefore, our random orcs will stop being orc 1, orc 2, and orc 3 to become something more memorable. That’s where this article comes in. Let’s make dull combats look special by adding some enemy champions:

I created this mechanic a year ago and wrote about it in my own blog before coming to Tribality. Not being satisfied with the way I described it and having tested it for a whole year, I wanted to present it to you now.

This idea came to me while playing the Shadow of Mordor videogame. I found their nemesis system awesome and wanted to replicate it in D&D. For those who don’t know what I am talking about, the nemesis system makes the game much more realistic by making enemies who encountered you remember having survived combat, defeating you, or having been defeated. They get stronger as time passes and throw insults, curses, and awesome phrases at you while in combat. Nevertheless, these enemies are just random encounters, that don’t affect the plot in any way. They just add an extra layer of fun and realism to the game that I absolutely loved.

I designed this to be as simple as possible. As long as you have somewhere to write in during combat (which I suppose you do because how else would you be able to track hp?) you should be fine. So, let’s begin with the explanation:

Let’s suppose we have the same encounter I talked about at the start of the article. Tarret the Cleric fails when trying to hit Orc 1. This would make Orc 1 a potential Enemy Champion. What does this mean? Let me continue and you will end up understanding in no time. Combat continues, with Orc 1 and Orc 2 rolling higher than Tarret’s AC, getting to smash his head with their greatclubs. Because Orc 1 got to avoid an attack and hit on its turn, it will now be considered a Champion.

Either hitting and then getting to avoid an attack or vice-versa in one single round of combat makes an enemy a Champion. This should not be done if our now proclaimed Champion has been hit before. This is because by not getting an attack on the enemy the players don’t know its armor class. Therefore, you can increase its AC by 1 or 2 making it worthy of its title. Changes in its stats can also be made in order to make it hit harder or maybe perceive better. The trick on this is not to fully describe the enemies until you’ve determined the Champion. This way, you can say it looks a bit stronger or sturdier and no one will ever know you added that on the fly.

Avoid doing this in more than one or two enemies per combat encounter if you don’t want this mechanic to become old fast. For this same reason, I recommend using this a maximum of two times per session. 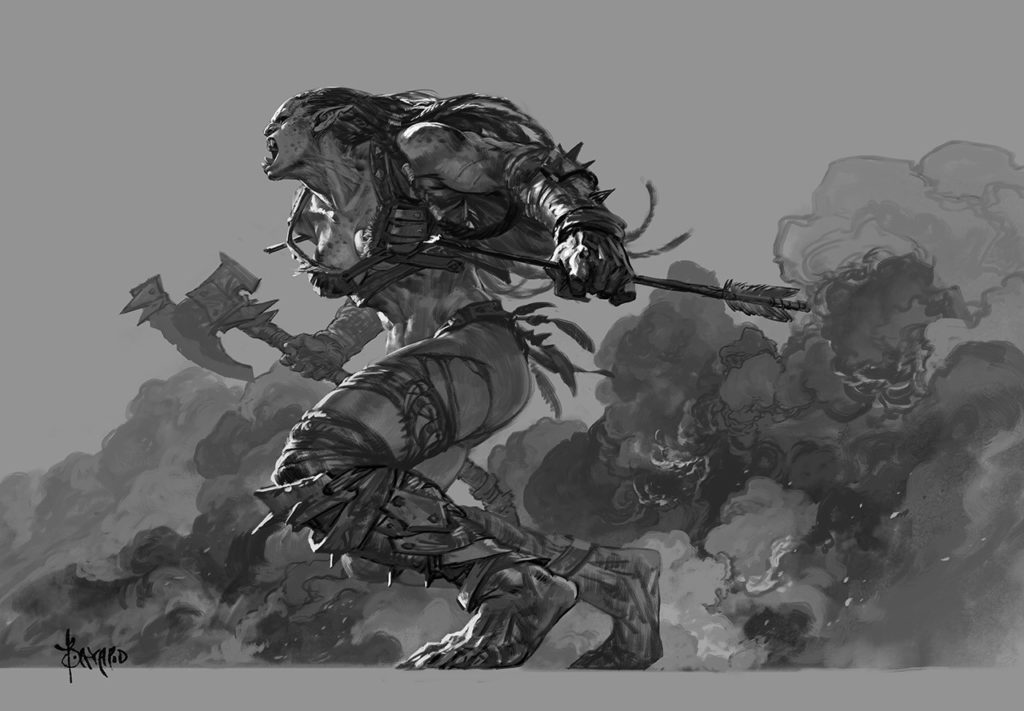 When you have finally got your champion, start fully describing its attacks and making it interact with the players by shouting, roaring, insulting, or degrading the player characters in or out of their turns. In no time, the random Orc 1 will become one of your players’ archnemesis and might even become the primary target during the fight. Go on with this for the entirety of the combat encounter, while describing the other orcs’ actions as you normally do and Orc 1 will be remembered for weeks to come.

If you get enough time during your players’ turns, consider going into FantasyNamesGenerator and getting a name for your random foe. This will create a greater sense of personality, and make it clearly stand out from any other foe of the same type.

– Julia the druid casts Entangle in a group of hobgoblins, making vines spread out of the floor and getting hold of one out of the three enemies.

Hobgoblin 1 and 2 (the ones who made the save) become potential Champions.

– Garret the ranger hits the entangled creature with his first shortsword attack, creating a single bloody line in its face. He fails the second attack though while trying to impact Hobgoblin 1 (the one who managed to avoid the spell).

Because Hobgoblin 1 was already a potential champion, not having hit him means nothing. Had Garret hit Hobgoblin 1 would have made Hobgoblin 2 the only one capable of becoming a Champion, as its AC would have been the only one that isn’t known (or Strength Saving Throw modifier in this case, due to the spell)

– Hobgoblins 3 tries to get the druid with its bow, but the vine now getting hold of its whole body makes it shoot a nearby tree.

– Hobgoblin 1 and 2 gang up on Julia and only one does hit. As we only want one of the two hobgoblins to become a Captain, I as a DM decide to make Hobgoblin 1 the Captain. I’ll give it +1 to its Strength score to increase its damage by 1, give it max hp (2d8+2 = 18)  and say the following: Hobgoblin 2 goes for the hit but you get to avoid the longsword at the last second. That’s when Hobgoblin 1 comes from the side and impales you right in the stomach. An extreme pain goes through your body as a warm sensation begins to flow across the wound. Hobgoblin 1 puts its face about 3 inches from your face and says “You think you are a match for us with your useless magic tricks? You’ve got to be kiddn’ me”. It spits you in the face and goes back to combat position, giving you a chance to make your move.

Notice that I chose to make Hobgoblin 2 fail before the other one hit Julia. This makes it seem more cinematic and as if Hobgoblin 1 was waiting for the right moment to attack. Then, I described its hit as gruesome as I could to let the players know this Hobgoblin is not like the others. Lastly, some nice phrase to infuriate the players and provoking to add up to the moment. Expect the players to savor killing this random Hobgoblin, or let vengeance consume them if it manages to kill one of the party members.

Important: Remember to mark your Captains in your encounter sheet so you don’t forget to play it this way again next time Captain Hobgoblin 1‘s turn arrives next round. 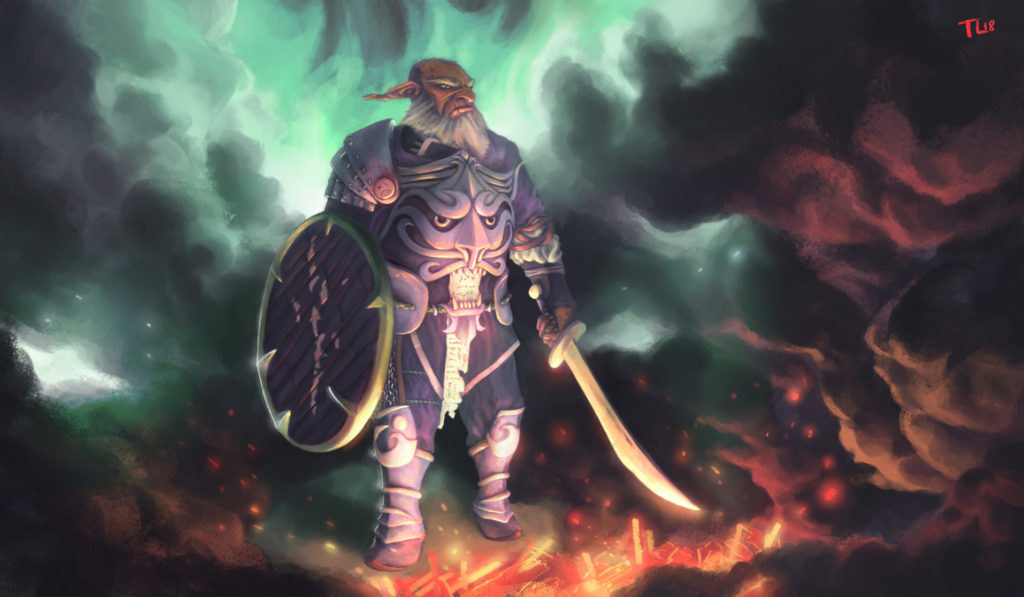 You’ve got someone your players now hate, it showed what it is capable of, but staying for long will probably get it killed. Retreat should always be an option after losing some hit points or noticing the fight is lost. The more times you do it the more your players will hate it. In fact, escaping can lead to a reappearance some sessions later, with the “Emperor” or “Skullcrasher” title, a better weapon (maybe a magical one?) and a small army by its side. You’ll love your players’ expressions when they notice the scars they left on Hobgoblin 1 (now presenting itself as ‘Skullcrasher Glag‘) are still there. A rematch arrives, and everyone is eager to destroy their rival.

This awesome and simple mechanic should liven up your combat in a very fun way. As long as you only tweak slight things to the enemy champions there’s no chance the encounter could go wrong if it was well balanced for the party from the ground up.

Did you like this mechanic? Are you looking forward to trying it out? Or do you think some things should be changed to make this even better? Be sure to comment your thoughts below and let me know if there is some other aspect of the game you would like me to revise and/or tweak.

Are you looking for new homebrew rules to add to your table? Why not try out the ones I list in this article?

Art of War for D&D Players