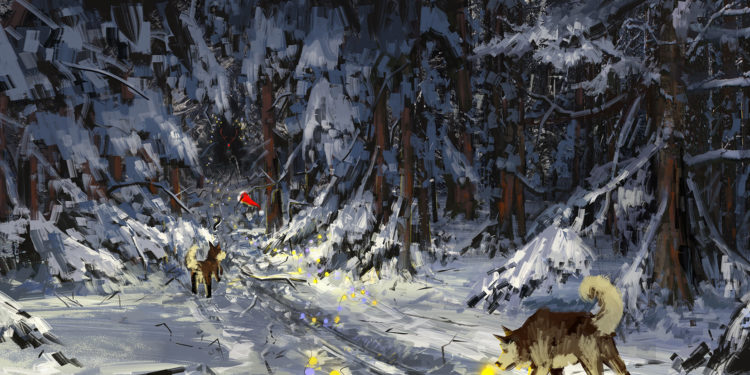 Barric Jingle, a dwarf looking, human-sized wizard has been mocked all his life due to his family name. Barric, however, cared not about the bullying he received. He didn’t want other children to have a childhood as torturing and sad as he endured. Barric yearned for children to be happy, and thus dedicated most of his life trying to find the perfect spell for that. After realizing that no spell can make quite a job, he had the brilliant idea to convince a gnome city to create toys to give the young.  The thought of having their inventions distributed all around the continent, as well as seen by everyone instantly made the gnome city mayor enthusiastic to carry out the plan. For one day, the gnomes will help Mr Jingle with the creation and distribution of presents to every kid in the continent. If everything goes according to plan, this could become an annual tradition.

What no one suspected is an Oni read Barric’s dreams during one of the previous nights, getting to know his plan. If the Oni could capture and replace Barric Jingle it would be able to have easy access to people’s homes and kidnap their children. Today is when everything is supposed to be carried out,  and the Oni got itself a group of goblins to do its bidding. 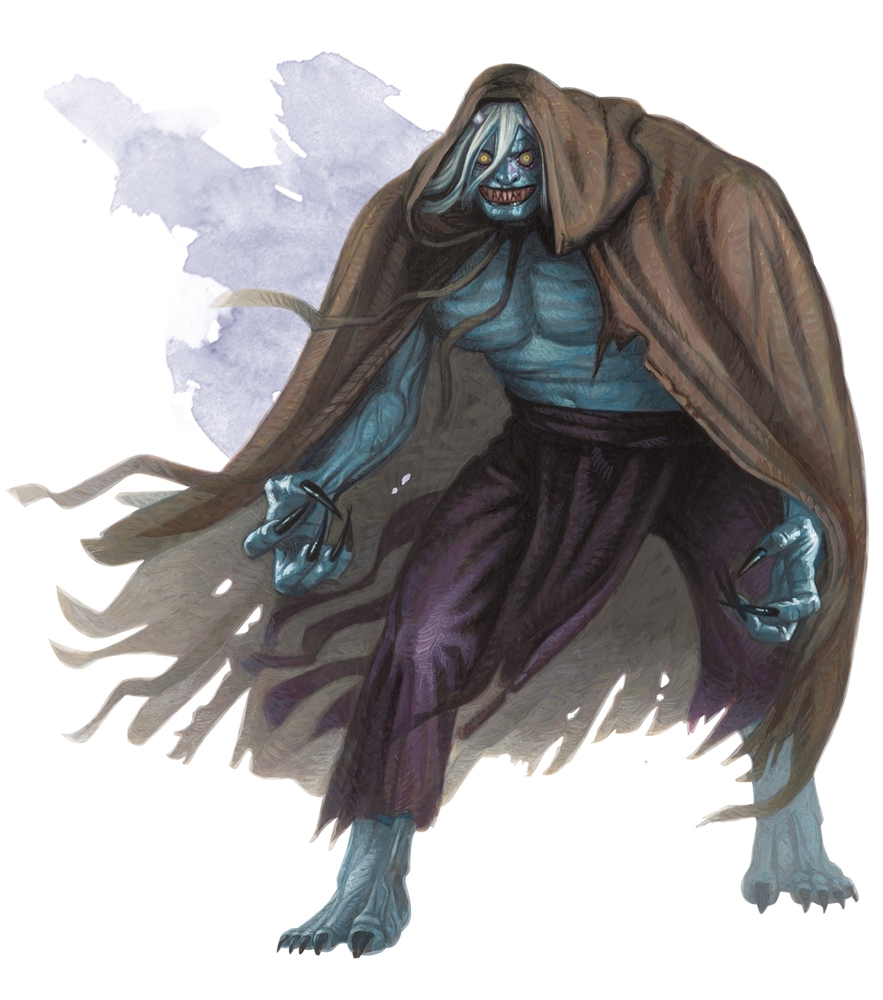 The Oni that ruined Jinglenight

A crashing sound is heard not too far away from your position, right to the north. It seemed as if something several heavy things have fallen from some height. The heavy snowfall makes it difficult to see too much forward, but it couldn’t have been farther than a mile away.

If continued forward, the PCs will start to hear some gruntings and desolating sounds coming from someone, as well as the noise of hammers being used. Approaching the area would reveal a track in the snow, from some kind of vehicle. Next to it, some other tracks appear next to the big markings as if things were dragged by its side. A DC14 Wisdom (Survival) check reveals it is from a sleigh-like vehicle, probably very heavy, or carrying a big cargo. Another DC14 Wisdom (Survival) or DC14 Intelligence (Investigation) reveals the dragged markings were left by some kind of furry animal being dragged by the vehicle. If the check is surpassed by 3 or more, they will notice the animals were probably tied in some way to the front of the vehicle instead of the back, as they all appear by the side of the sleigh. If the players are successful in any of the checks, they will end up finding the vehicle before the assailants arrive. However, if the PCs fail the checks they will end up finding the sleigh as well, but they will take so long to reach destination that they will have no time to talk with those there before the Oni and its companions arrive.

It doesn’t take you much time to find the colorful sleigh in which 3 gnomes dressed in green clothing are hard working. They seem to be fixing some bludgeoning marks on the front and back of it.  To the side, 6 unconcious goats lie on the floor tied to the vehicle, no blood trace or anything that indicates they could be dead. Next to them, a robust 6 foot tall person with a dwarf-like gray beard stands grabbing its head in worry, dressed in brilliant red winter clothes. Some sort of multicolored cannon is positioned on the back of the vehicle, big enough for a cannonball sized object to be inserted, but at the same time an extremely comfortable size for a gnome to manage with ease. As this was not enough, next to it, you can see what you can perfectly discern is an oversized bag of holding of some sort.

The big looking man will present himself as Barric Jingle upon seeing the players. He is at the moment extremely worried by the situation, and will not stop grumbling and kicking the sleigh from time to time in frustration, saying all his work has been for nothing, and that Jinglenight won’t ever exist. The gnomes, on the other hand, will greet the player characters and ask if they could help calming down “the big guy” or fixing the sleigh. “Time is of the essence“. If the player characters ask for something in return, a gnome will say they surely can find something great of value for them if they help out.

It takes two player characters to succeed in a DC12 Charisma (Persuasion) or Charisma (Intimidation) check for Barric to calm down and focus on the situation.  He will then proceed to tell that the sleigh is magically linked to the goats to follow their path and be pulled by them, even when they fly due to a fly spell. At one moment, both the goats and him fell asleep, making him lose concentration of the spell and falling. Barric received a big hit and lost half his hit points due to the fall, waking him up, while the goats and gnomes received no damage, being cushioned by the great amount of snow in the ground. Barric will begin to tell the story provided in the Encounter Background section until he is interrupted by the arrival of the invisible Oni:

Coming from behind, but definitely not in sight, a raspy deep voice says “Had one of those dreams you fall into darkness again?”, accompanied by a chuckle. The voice now seems to come from around your position, as if an invisible source was slowly spinning around you. “Run, run as fast as you can. I am your nightmares’ manifest!”. The moment the voice dissipates a group of goblins show up in your line of sight, weapons at the ready.

If the player characters take too much time to reach Barric and his group due to poor checks from their part read the following text on their arrival:

A large cloaked figure and a group of goblins are seen dealing heavy damage to a green dressed gnome on the floor. Judging by the blood marks on the snow, it’s easy to assume it can’t still be alive. To the side, hiding behind a clorful sleigh, a tall person wearing red winter clothes with a dwarf-like gray beard stands with a terrified expression in his face, next to two pale looking gnomes, dressed just like the one on the floor. The sleigh appears to have a cannon on top, as well as an oversized bag. They signal for help, making the cloaked figure look in your direction. The figure’s dark eyes, but with great white pupils seem to penetrate your souls with its view. Its yellow sharp teeth show to make a big smile in the hulking ogre like creature. “It seems you brought guests” it says before quickly dissapearing from your sight while the goblins pull their weapons to ready their attacks.

The oni will try at all moments to remain invisible. It has already used its daily sleep spell to get down the vehicle from the skies. In its first turn, the oni will use its darkness spell, locating it in the sleigh section trying to cover Barric’s area, and as many gnomes as it can as well. An amount of goblins equals to the amount of players will be here, adding an extra one if the average player level is 8 or 9. The oni will try to attack the PCs with its glaive while invisible 10 feet away from them, and instantly run to the darkness section as its invisibility drops to avoid opportunity attacks. If surrounded, the oni will proceed to attack the NPCs. If not, it will turn invisible again and repeat the strategy I wrote. Meanwhile, the goblins will divide themselves in two groups, half of them attacking from a ranged position while the others go face to face against the heroes, focusing their attacks on one of them at a time.

Due to weather conditions, creatures see the area beyond 30ft from them as if it was in dim light. Moreover, all creatures have disadvantage on Wisdom (Perception) checks that rely on seeing.

When drawing or describing the place where the action is taking place, make sure to add several trees and/or rocks to use as cover or climb to get an advantageous position. The goblins will use these to their advantage as best as they can.

The sleigh is considered Large in size and can be used for cover.

Barric Jingle is a half-dwarf, who didn’t prepare at all for a fight, as his prepared spell list suggest. The players find him with 22 hit points left. He will cower in fear, and run away if he reaches 1/4 of his health (11).

The gnomes use the commoner stat block and have a speed of 25ft. If convinced to help, they will be too scared to do so but will signal the player characters to make use of the cannon.

The Oni is a regular oni with the exception this one also can use the following Reaction:

The cannon was originally made to shoot presents to the houses, but Small creatures can be launched with it. It takes a bonus action to load the cannon, and another one to fire it. Items or creatures shot with the cannon do 3d6 damage on impact, both to the item or creature launched and to the target.

The sleigh has a gnomish teleporting device that activates when reaching 100ft in height, transporting up to 10 creatures in a 20ft area to a random city in the continent.

If the enemies defeat the party, they will be left unconscious while the Oni and the goblins start traveling from one city to another luring kids with the toys, only to kidnap them. The gnomes and Barric are found dead.

If the players end up victorious, Barric will ask the player characters for assistance if one or more of the gnomes is dead. He needs help for the night to deliver the presents. If none of them died, Barric thanks the PCs and ask if they want to accompany him in his mission. Barric needs at least 3 people working with him (including the gnomes) to fully deliver the presents during the night. Even though working with Barric will surely bring instant joy to the player character, it also makes it gain a level of exhaustion for staying the whole night awake.

If Barric Jingle completes his mission in delivering the presents successfully, he will give the player characters the bag of holding including a gnomish toy for each of them, as well as 10pp per PC.

A Guide to Roleplaying Dwarves