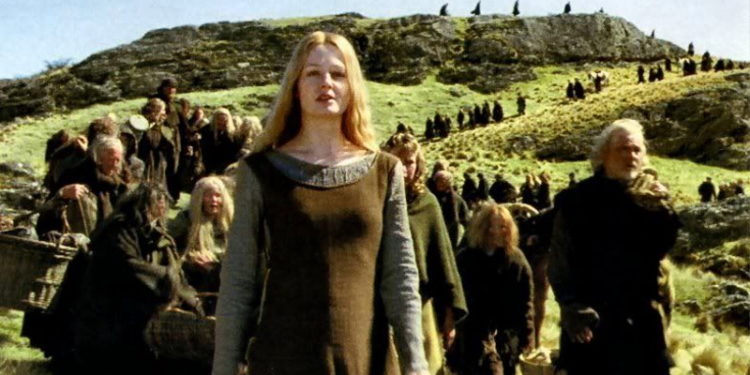 In a conversation with the inimitable Samhaine, we discussed having PCs lead the overland escape of a large group of NPCs – think of it as the Fellowship shepherding the people of Rohan from Meduseld to Helm’s Deep, the travelogue format of zombie horror, or the terrestrial version of Battlestar Galactica’s constant, harrying pursuit. This isn’t directly modeled in the DMG’s chase rules, which are intended for a short-term urban or wilderness chase. They’re more about your running speed than the speed of your supply train. In this post, I’m adapting those rules to suit a longer-term affair.

This is a repost from my personal blog, Harbinger of Doom.

A long-term pursuit requires a group that is fleeing; these rules are not intended for individuals or small groups. The pursuer represents an overwhelming force, such that their forward scouts are an exciting combat encounter but the whole of their force is guaranteed to crush the fleeing group. The traveling speeds of the two groups need to be generally comparable. Otherwise, you don’t need these rules and the outcome is fairly obvious, one way or the other.

For the duration of this challenge, check out the optional rules around longer long and short rests. Consider whether you want this pursuit to be the story of a single session (still covering days, weeks, or months) or many sessions. The rules around 8-hour short rests and week-long long rests are all the more appropriate if you’re leaning toward a single session, or a smaller number of sessions. Some players will find it off-putting to change how long it takes to recover spellcasting abilities and the like, and that’s… at least fair from a cosmological perspective, if not a narrative one.

There are two major factors in the tension of long-term pursuit: Supplies (your ability to keep going) and Distance (the gap between the two sides). If the PCs are protecting refugees, they also have to worry about Population. When determining initial values for each, make sure they average out to 10. More starting Supply and less starting Distance is probably more fun than the reverse.

Supply: Food, water, medicine, shoe leather, horseshoes, warm clothes, and whatever else you need to survive are all handled with the Supply stat. Shortages of individual goods can crop up as events even when Supply is above 0. When Supply falls to 0, your movement speed is halved and you’re likely to lose Population. It’s generally assumed that your population can live off the land to a considerable degree, so that you don’t lose Supplies at the beginning of each day, but you’ll need Supplies equal to half your Population for each day of travel in barren land.

Distance: This number doesn’t translate cleanly into miles, but generally signifies hours of travel. When Distance falls to 0, you encounter the pursuing force’s advance scouts. This encounter either becomes a wilderness chase (if the PCs are the entirety of the escaping force) or requires the PCs to stop and fight them (if the PCs are guarding a larger group of refugees). If the PCs win the fight or the chase, Distance becomes 1d4.

Population: When this stat falls to 0, there’s no significant number of refugees left to save. Depending on the story, it may be possible to mount daring rescues into the enemy camp to boost this number. The nature of the pursuing enemy might also allow this number to go up, as people you encounter in the wilderness also need aid against that foe. 10 is “about as many as the PCs can handle and keep safe.” 20 is “desperate overcrowding.”

Keep these values hidden from PCs and translate them into terms that suit the narrative. Population 10 might be 10 people, 50 people, or 500 people, depending on what suits the situation – so say 10, 50, or 500 people in your narrative. This means that PCs won’t always have a crystal-clear understanding of what their die rolls mean, so just assure them that high rolls are good and low rolls are not.

Participants in a long-term pursuit likely want to undertake forced marches as often as possible. Rolling Constitution saving throws for everyone in a large group is, of course, impractical. Unless the NPCs being escorted are unusually hearty (such as a clan of dwarves with their racial bonus to Constitution), treat their collective Constitution as 10. After a number of forced marches equal to 3 + their Constitution modifier before they must take a full day with no travel at all. If they attempt to travel when they must take a day of rest, roll 1d20. If the result is less than the current Population, the Population decreases by 1d3, as people are getting separated from the group and collapsing from exhaustion. A forced march increases Distance by 1d4.

At mid-to-high levels, many spells – especially druid spells – can greatly alter the course of a long-term pursuit, or potentially trivialize the challenge of maintaining Supply. Keep in mind that, in order to be the overwhelming threat that the premise requires, the pursuing force must have access to one or more forms of magical power, potentially giving them several ways to counter those spells. As a shorthand, any single spell might increase Distance by up to half the level of the spell; if there’s simply no probable way for the pursuers to solve or circumvent the spell, then the long-term pursuit may be at an end. (See also, Moses and ideal use cases of control water.) It’s fine – the villains shake their fists and promise revenge, and you move on to a new problem. (Let’s face it, even without pursuit, maintaining Supply and Population are problems on their own – but they’re problems for a different rules block than this, probably.)

At the start of a long-term pursuit, the fleeing side may or may not have an idea of where to go. Ideally they have at least a first hint of where to find a safe place. Characters in zombie movies, for example, are usually drawn onward by hints or rumors of a haven.

Some kinds of pursuers give up if Distance rises to somewhere around 16. At that point, the foremost among their scouts can’t make contact with the fleeing force within the same day of pursuit, and closing the gap is unlikely unless the fleeing force is compelled to stop for a full day.

Since the PCs only see the action from their own perspective, they need complications to overcome. Roll 1d20 and 1d8 at the beginning of each day. If the d20 roll is 1-10, it triggers a complication from the chart below, which occurs in an hour of travel based on the d8 result (1 = first hour, 2 = second hour…) This is written with an assumption of land travel, but a similar table for sea travel shouldn’t be that hard to create.

The numbers presented here are untested guesswork. I have no idea how this would come out in actual play over the course of multiple days. I’m definitely concerned about the bookkeeping becoming irritating – logistics is the kind of problem that is appropriate for this story, but hard to turn into fun at the table. If you give these rules a trial run at the table, Massage the numbers a bit, and throw in beneficial encounters as well.

The rules around Supplies are the weakest part of this rules module. Most likely there needs to be an established amount that you can replenish supplies by slowing your pace or staying encamped. My preferred narrative, though, has you traveling from semi-safe location to semi-safe location, restocking up to 10-20 Supplies at each stop.

At least in writing it, I feel like having a few stats to track and a table of complications that come up on average every other day is a pretty decent model for skill challenges in 5e, because you can include so many different little stories in the table. It’s possible that I’d try it in actual use and feel some other way about it.

For a non-D&D game that makes this kind of drama a core element of its gameplay, you need (not want, need) Band of Blades by Stras Acimovic and John LeBoeuf-Little, available from Evil Hat. I will say that even if D&D is Your Jam, don’t sleep on Band of Blades, because it has good lessons to teach that you can bring back to your D&D games about managing tone and tension.