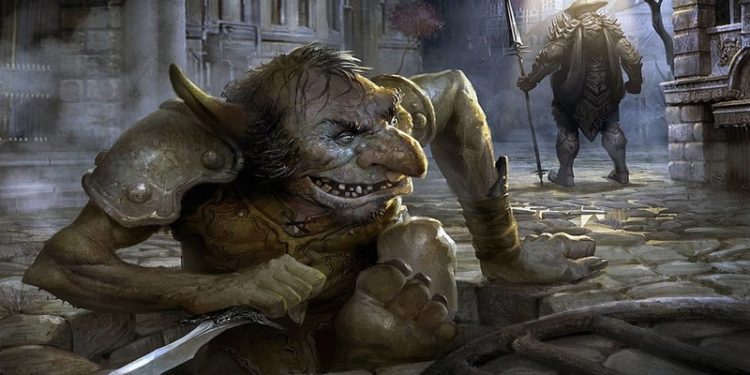 Per special request by a reader, this week we’ll be examining how to roleplay goblins. Goblins are one of my favorite races, and one of my favorite words. Both smarmy and evil, comical and cruel, goblins make fantastic enemies and many have met their end at the point of some adventurer’s blade.

But what if you wanted to play as a goblin? Let’s explore how you can roleplay a goblin in all their gobby-gobbiness.

Playing an “evil” race within a heroic campaign

Let’s start by examining how to incorporate a character from an “evil” race into a D&D 5e campaign.

Assuming your DM approves the choice of playing a goblin, it’s up to you to decide how your goblin got mixed up with a bunch of adventurers instead of sticking with their tribe. While you could play the opposite of a traditional goblin, and be a goblin with a heart of gold, it may be more interesting to play into the goblin-ness.

One way you can rationalize why your character would choose to save a town from a red dragon, or rescue an imperiled child, or do anything remotely self-sacrificing and heroic is to reframe that decision. Instead of seeing it as heroic, selfless, or whatever other positive attributes, play with a reason why they are on this adventure that is self-centered.

Perhaps your goblin, or any evil character, is with this group and helping achieve the mission because doing so would be to their ultimate advantage. By defeating the red dragon, you open the path to dominate the townsfolk, by rescuing the child you gain fame and fortune and so on.

You can be evil without necessarily twirling your mustache and killing randos in each town, just by playing with non-good motivations. You can do things like demand cash upfront, or cheat people. You could try to control people by demanding service in exchange for your heroic efforts.

Here is the key to playing an evil character: Don’t be a jerk to the other players.

Sure, cheat them out of some money by playing with a stacked deck while at the inn, maybe ask them for money in exchange for helping them up a cliff.

Use your backstory hooks and your reason to adventure to give your character a reason to be with the party, to care about them. Even evil characters need to fulfill basic social needs. The party could be the thing you cheat the world for.

And if you do want to betray the party, clue in your DM so it can be a memorable and exciting moment.

Alright! Let’s get to Goblins!

A goblin’s behavior is centered around who they can dominate and who dominates them. Their lives are constantly in a state of flux where they lie in the power structures of their tribe.

Whenever they can, they dominate whomever they can and delight in treating their slaves with the worst treatment they can. This need to dominate can manifest for your character as a need to always get the best reward possible.

They could even think that they dominate their party and the different members are their slaves. The other members might humor the goblin that travels with them, but this could also be a good place for interesting roleplay conflict.

As a side note, the fact that rats and wolves are the goblin equivalents of dogs and horses is my favorite goblin fact. A goblin breeder of prized hunting rats is a character I want to see in a game.

Goblins are easily dominated by those who are “bigger, smarter, more organized, more ferocious, or more magical”. Maybe this informs your goblin’s reason for adventuring.

Having a solid reason for your goblin to adventure can help give a spine to your character throughout the game. It is the thing that can help link each decision they make along the journey.

Where does your goblin fit in the goblin tribe?

Goblin society is highly stratified with the most powerful at the top and the weakest at the bottom. Consider where in the tribe your goblin lived and what role they played?

Where they a deposed boss of a tribe, bent on gaining back their position of dominance? Maybe they were a scout or hunter with designs on growing their powerbase. Or, maybe they were a lowly gatherer or pariah who wants to prove that they are better than their place in the tribe.

Magic using goblins are rare and are often elevated to the upper class of goblin society. This could inform your character by giving them the mindset that they are superior to every creature they meet, even an ancient dragon. This bravery from pride is an interesting way to play a goblin and be the root characteristic of a lot of interesting roleplay.

How does your goblin display their status?

Status is everything to goblins. A fun aspect of role-playing your goblin is how do they display that status. Assuming your goblin doesn’t fully disguise themselves everywhere they go, most goblins will carry or wear some sort of status symbol.

Maybe your goblin wears a chain of ears from the creatures they’ve slaughtered, and insists the rest of the party does too.

Each caste in the goblin tribe has their own symbol to wear, and maybe your goblin still carries that symbol.

These status symbols aren’t just flashy ways to show off, but they represent and display the goblin’s value to the world. It encompasses the goblin’s whole world view in a way. They are defined by their place in the world and their constant jockeying to the top.

Questions to ask when developing your goblin:

For more guides to roleplay your favorite race, check them out here: elf, half-elf, half-orc, lizardfolk, human, dwarves, halflings, dragonborn. A new guide published each week. Comment with your favorite race and it might just be featured!