It’s been a couple of weeks since the chaos of Subclasses, Part Two: Revenge of the Bride of the Electric Boogaloo, so yesterday WotC dropped three more playtest subclasses. We have the Armorer artificer, the Circle of Stars druid, and the Fey Wanderer ranger conclave. (Yes, I know it’s still technically “archetype,” because “conclave” got buried beside the UA Revised Ranger, but – and I cannot stress this strongly enough – you can have it when you pry it from my cold, undead hands.)

I’ve written breakdowns for a hell of a lot of classes and subclasses at this point, but not very many of them have Marvel Comics in their crosshairs quite as specifically as this one does. There are plenty of articles on this very site on how to build Marvel characters in D&D 5e, but this? This is for Iron Man and Shuri and every other power-armor-jockey/engineer out there.

I don’t think I’ve hidden the fact that I think this is a super cool subclass, and I expect it to be an instant hit among artificer builds. My two little issues with it are the thing I mentioned about Armor Modifications, and that I want the door to stay open for a third and fourth armor mode. At minimum I want to see a flyer (outside of the winged boots infusion, I mean) and a melee striker/skirmisher (completing the Black Panther/Warframe concept). Regardless, there’s a lot to love in this subclass. It’s always great to see subclasses that bridge a class into a combat role that isn’t its default mode.

I also respect that these artificers could just be Mandalorians in a world where Beskar steel isn’t that damn hard to find. Whistling birds and disintegration rifles absolutely sound like some great high-level artificer tricks. 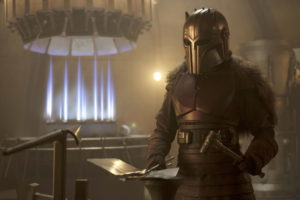 Also, there are five new infusions!

Armor of Magical Strength furthers the idea of using your Int (artificing potency) in place of Strength for checks and saves – very appropriate to Iron Man or Shuri. The armor also has 4 charges that you can use to ignore effects that would knock you down. A must-have if Guardian mode is a key part of your party role.

Armor of Tools is your Go-Go-Gadget arcane-screwdriver or whatever. You can store a tool in your armor (let’s face it, the answer should just about always be thieves’ tools, just in case), and you can use Int in place of any other ability for checks with that tool.

Helm of Awareness gives advantage on initiative checks, and makes you immune to surprise as long as you’re not incapacitated. Seems fine. Go ahead and name it JARVIS.

Mind Sharpener is described a little oddly – sending a “jolt to the wearer to refocus their mind.” That sounds like the opposite of sustaining concentration to me, but that’s what this does as long as you have a reaction to spend. That’s absolutely incredible (there’s no use limit other than costing a reaction, and it always restores concentration when you use it), but you definitely can still lose concentration if you’re getting hit multiple times in a round.

Spell-Refueling Ring lets you refresh one spell slot per long rest, with a spell level up to the number of magic items you have attuned. That sounds pretty good at any level of play, but with a strong potential for power creep (as I’m sure someone will write some circuitous way for artificers to equip a seventh, eighth, or ninth magic item).

Circle of the Stars Druid

Druids who watch the stars and have some kind of reason to care about megaliths? Yes please. Also a divination/fate-control thing? Even better! This subclass story couldn’t fit into my homebrew setting any better if I had designed it myself, so I’m instantly intrigued.

I’m still super invested in this subclass’s aesthetic and gameplay, but I might like to see a different 14th-level feature. It’s not bad, just tonally odd. The Starry Form options are incredible, and I’d like to see that list extended a bit more (because I always feel that way about cool lists of options). Hands down, the best thing about this subclass is how strong its visuals are.

On the basis of name alone, this is another subclass I’m positively inclined toward. Some of the implication here is like a Horizon Walker that only cares about one planar border. You also might have a quasi-patron among the fey, or just a bond with a fey location.

I like most of what goes on here, though having a ranger lean this heavily on psychic damage is a weird fit. Beguiling Twist seems like a weird fit to me, and I kinda wish they had given this to Enchanter wizards instead (because it shows mastery of mind-affecting magic while doing something other than the charmed condition again). As you know if you’ve read my ranger subclasses, I am all about giving rangers a Divine-Smite-like way to spend spell slots, all the more because ranger spells are so disappointing.

The subclasses here bring a lot of intensity right out the gate, and I would be happy to play any of them. Their concepts are striking and immediately clear. Honestly, I don’t know how you could read the Armorer and not instantly want to play it. (I don’t need to know.)

I wish there were a few more exploration or social-interaction features getting tossed out in this document – they’re not absent but I think they could be stronger. That’s something I generally want out of 5e at this point, though.

The bonus action wording bugs me. It’s based on a polite fiction denying that the bonus action is a default part of your turn, because players who didn’t have a way to spend their minor actions in 4e felt like they were missing out somehow. That was a sort of odd idea in 4e, but it’s much less of a danger in 5e, because classes and subclasses do engage deeply with bonus actions as part of their gameplay. I think that’s been an unsung part of 5e’s popularity – it feels good to make two different action choices (action and bonus action, I mean) on your turn.

Exploring the Criminal and Spy Background