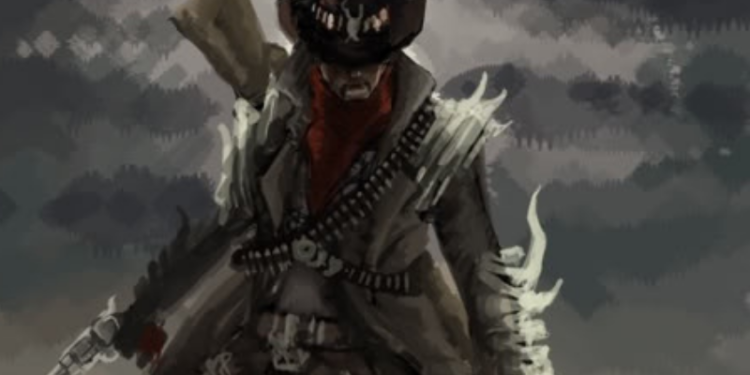 This week we will spotlight another character build that was inspired by the options presented in Tasha’s Cauldron of Everything. If you missed the past two, you can find Sassa the Lorehunter and Captain Thranis Stendor here.

Glint takes advantage of the abilities that the Psi Warrior fighter subclass offers. I hope this take on a ranged tank gives you some ideas for potential characters to bring to your own table.

The streets of Atuk are dangerous places for anyone to linger in once the sun dips below Mount Cargoron. If you’re lucky, you’ll lose nothing more than some coins, jewels, or clothes. If unlucky, your death might spur bounty hunters like Glint into action.

Glint was born in the House of Crystal Fire, his mother a rich noble descended from an Efreeti, and his father one of her many consorts. Glint was one of many children growing up and stood to inherit very little so he was largely ignored. He was befriended by the Artillerist of the House of Crystal Fire, Cormac Cruvan who saw that Glint possessed a latent psionic talent.

Cruvan taught Glint how to use the firearms Cruvan crafted, and did his best to help Glint hone his psionic abilities.

When Glint was eighteen, he left the House of Crystal Fire and apprenticed to the Royal Huntsmen Guild. There he learned how to track down marks and how to fight. He quickly gained a reputation of being an expert shot and possessed uncanny abilities that could render a mark incapacitated at a distance.

Glint does his best to distance himself from his noble heritage. He will rarely mention it, but he still remembers the lessons in rhetoric that Cruvan taught him. Glint hunts bounties not because he needs the money, but because he believes he is delivering true justice. He moves through the world, dedicated to a core set of ideals centered around his profession:

His inflexibility can sometimes cause his friends to chafe, but he will let himself enjoy a drink or two after a good hunt.

I was initially inspired to create a ranged tank after taking a look at the Psi Warrior and seeing that the majority of their abilities can be used at a range of 30 feet. At level 4, he can create a protective field to reduce damage taken, use his psionic power to cause more damage on a hit, and move an object or creature with his mind.

I chose his main weapons to be firearms, specifically a pistol because what would be cooler than a fire genasi armed and ready to do some blasting? I gave him the Gunner feat to help boost his ability to shoot while in melee and to help him bypass the loading property of firearms.

At the moment, he only has leather armor equipped, but I’d probably ask the DM if I could start with or buy some better armor. Potentially, he could multiclass into Artificer to expand his artillery, or to get a battle companion, like a robo-bloodhound.

His generous +6 to Stealth means that he can slip in and out of situations with the party rogue. He is also proficient with thieves tools so he could potentially stand-in for a rogue if the party lacks one.

Glint would fit well in a setting like Eberron, or a campaign set on the high seas, like The Seas of Vodari, or any setting where firearms are present. You can also easily swap the pistol with a hand crossbow and get largely the same feel to the character design.

One interesting thing about his build is that he is untrained in survival, so that brings up the question of how he tracks down his bounties. Well, with training in persuasion (still only a +1), and a decent investigation, maybe he looks for them through interrogating people. That deficit could be why he joins the party. Maybe he needs some help to round out his skills as a bounty hunter.

Tell me about some of your fun character builds in the comments below!

How to create Quests for Open World ...