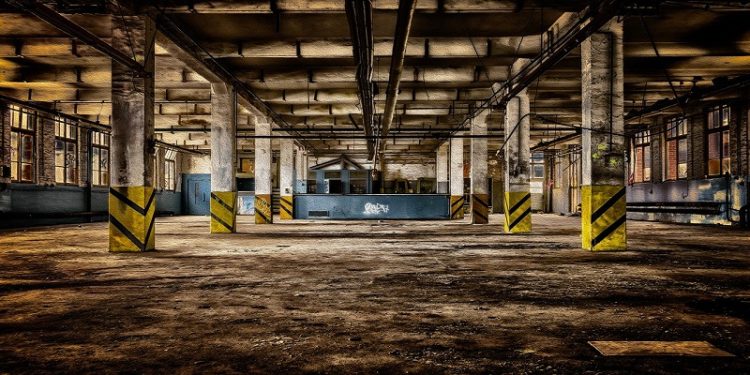 1 It wasn’t “abandoned.” Everyone died off.

The town founders located the town “off the beaten path,” so that they couldn’t get help. It could be either that monsters attacked the town. Perhaps a plague swept through it. Or maybe everyone was old and died, and with no one to renew the population, the town died.

Aliens visited the site repeatedly, causing strange occurrences. Maybe radiation caused the crops to grow weirdly. The corn grew electric blue or the grapes a blood orange. Or the livestock to be born with two heads or five legs. For all the PCs know, the aliens could have abducted the townfolk to do experiments on them. Mindflayers took the entire town. Whatever the case, the town is empty.

Pirates are well-known for burying their treasure. The pirate trope is a map where “X marks the spot.” But many times, the pirates weren’t going to go through the trouble of making a map. Maybe they encoded the location somehow in a logbook.

For instance, an entry might read, “Travel up the winding river, beneath the bridge. Turn at the left fork that empties into the lake. Look for the tree, shaped like a “V.” You will find the treasure hidden beyond, under the vines. It’s up to the PCs to figure out where it is, and if the clues make any sense. It could just as easily be that the landscape has changed in the intervening years or there’s been developments that make the treasure impossible to find.

If you want more inspiration of such puzzles, look at the real life mystery of “The Secret: A Treasure Hunt.” Note: these puzzles are VERY difficult to decipher, and you might not want to make it THAT hard for your players to solve a mystery.

If a factory is no longer profitable, one of three things happens. The first is that the company sees someone else wants it. Should this be the case, the company that owns the building sells the property for profit, if possible. Next, if no one wants it, they’ll see if they can retrofit it to another one of their production lines. If this is not possible, then they abandon it. Depending on whether or not the company was still profitable will determine what is left (if anything) of value.

What dangers lurk there?

If a company or the military is experimenting in top-secret technology, they might invest in building a testing facility. Depending on the technological level, this might be a testing facility for magic potions, chemicals, explosives, aerodynamics, or nuclear energy. In such a facility, there might be strange hallways that dead end for no reason. Conversely, all the halls might converge. Another possibility is that the facility is a giant hangar, like ones where they build and store airplanes.

Because of their dangerous nature, it’s understandable they would often be built off the beaten path.

Gold, silver, gems, and other valuable materials dug from underground can “run dry.” And when a mine is no longer profitable, it’s abandoned. Or it could be that the unfortunate miner(s) ran afoul of a collapse, angry monsters, or a flood.

Mine collapses are problematic for several reasons. First, the people unlucky enough to be trapped will asphyxiate if not resued. Even if they are, survivors may not wish to go back to work. Then there’s the fact that the mine itself becomes too dangerous to reopen. Months (or even years) of work vanishes in an instant.

Monsters are another issue. Some commonly encountered in mining operations are:

If there’s no drinkable water, there wouldn’t be anyone in the town. Maybe the town’s water source was polluted. The townsfolk have been dumping garbage into a hole in the hamlet. Unfortunately for them, the opening leads to a cave complex that is the source of their drinking water.

Or the town’s water supply, once a freshwater spring, became contaminated with saltwater.

Conversely, deliberate poisoning could have been the cause of the problem.

What do the PCs do when they run across a place where not even the water is safe to drink?

During wartime, governments build military bases, and then subsequently abandoned them after the war is over. Maybe parts of the base withstood the test of time. Here’s a table of dilapidated places that you might run into while visiting the site:

There are a wide variety of famous industrial accidents that have happened in the real world. The accidents’ fallout often results in death, disability, and dangerous conditions for those who remain. Depending on the timeframe, the fallout could be literal, i.e., radiation, or figurative. The site could seem to open to hell itself.  If the site is still dangerous, hinges on how long it’s been. Even if the air is safe to breathe and radiation is not a problem, it still might not be safe. The plants, soil, or water could be all affected by what happened.

In times of war, instead of being caught between two opposing forces, frequently, people will flee. Maybe the town itself was bombarded with opposing mages. Or in a slightly more modern setting, cannon fire. In both of these scenarios, the military doesn’t pay for property damage, frayed nerves, or loss of crops. Conversely, the military could have ordered the population to vacate so they would be safe.

By using abandoned sites as a springboard to drive the plot, you can make better use of your game’s locations. Look out for part 2 of this series soon.