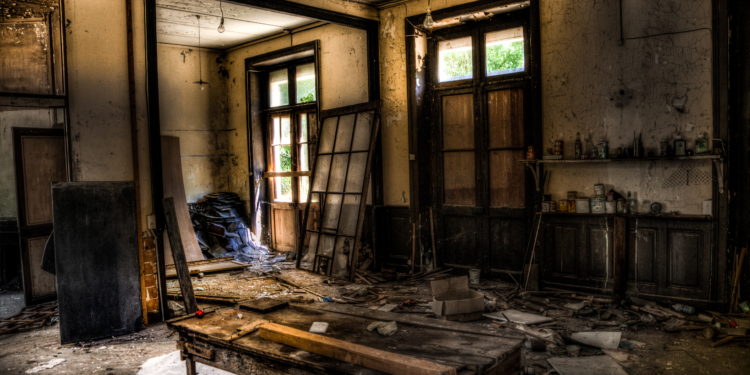 (Author’s note: I’m picking up where I left off numerically)
One of the classic D&D tropes is a party entering a dungeon. Such places are either abandoned, in the middle of nowhere, or, sometimes, under a bustling city, but forgotten. Sometimes, these sites don’t need many repairs to make them usable. If this is is the case, often other things have taken up residence. But that begs the question, why were they abandoned in the first place? This article will answer that question. Read on:

In the real world, pop culture with “found video footage” shows us how ghosts terrorize people. According to believers, such hauntings sometimes aren’t recordable but show up as an eerie feeling. Other times, the spirits move objects, cast shadows, or try to communicate with the living. Even in worlds where magic is real, ghosts can still pose a problem. Poltergeist activity – that is moving  Not only can they move objects around, but they can also try and possess people. If there are no adventurers around to rid them of the problem, those living there before may choose to leave.

The site was once a battlefield, but because of the dangers, it’s been abandoned. Such places there’s oftentimes fence around the area or the government has guards patrolling the perimeter to prevent anyone from entering.

I’m thinking about a few places I know in my hometown.

One place was an unused path between a parochial school and a local foster care building. I used to go there when I wanted to be alone. It was handy because there were stores nearby if I wanted to use the bathroom or buy myself something to eat, but hardly anyone thought of looking there for anyone. No one who didn’t know it was there would ever guess.

Another was a store on the side of a strip mall. It was small and unobtrusive. Maybe there was construction for so long, whatever was there had to close.

A third was a local abandoned playground because the building was no longer a school. The playground was never taken down, but because the school had moved, no kids ever played there anymore.

D8 reasons why something may have been forgotten by natives

The dead in a burial ground of an ancient people mercilessly killed curses anyone who inhabits their land. This curse can take form in a variety of ways. Check out the article “Reasons why someone might be unlucky or cursed” section “32 ways a curse might affect the character.”

Conversely, the curse isn’t to the inhabitants of the land per se, but the land itself. The ground could be too hard to dig and will only support weeds. Or maybe the water, while perfectly safe to drink isn’t palatable.

The area around the settlement is not suitable for growing much of anything. Maybe it had been salted previously during a time of war. Or the site was strip-mined. The soil’s nutrients washed away in the process. Perhaps the ground’s fecund for weeds and the inhabitants of the town didn’t know how to prepare what grew there. Or maybe the settlement repeatedly was the target of evil druids who blighted their crops.

The government deems that the area isn’t suited for human habitation so they moved the people, either by force or paid them to leave.

Not all prisons, hospitals or mental institutions withstand the test of time.  In the past there was little distinction between lunatic asylums, hospitals, poorhouses, and jails. Those unable to fit into society were shut away in these squalid facilities. Such facilities were both overpopulated and understaffed.

Due to poor understanding of the human psyche, primitive medical technology, and lack of religious, govemental, and social support systems, society’s undesirables were dumped into these places to be forgotten. Their imprisonment often lasted years, sometimes for their entire lives.

These places were burdened with addressing everything from the criminally minded to those with health problems caused by chemical imbalances to those with persistent medical problems. These facilities had some of the most horrific and torturous “treatments” that you can imagine. Because of this, it makes a lot of sense that these places would at least be very creepy, if not actually haunted.

Creepiness or hauntings aside, they may have been closed due to:

17  The people are there, but at a different frequency

In the original Star Trek, Kirk and his crew answered the call of an apparently abandoned planet. But appearances, in this case, were deceiving. The aliens were there, but moving so fast that they were invisible. In Star Trek the Next Generation, there was an episode where an alien evolved into pure energy. Note: the “frequency” doesn’t even have to be physical. Maybe the people once inhabiting an area are nothing but dreams and can’t interact with anything outside that realm.

Maybe there’s an umber hulk burrowing under the city, gnolls attacking the walls, or a dragon has decided that the city is its new home. Whatever the monster, people felt unsafe and so left. Even if the monsters were easily defeated, having to deal with them day in and day out became a hassle, so they decided to move.

Instead of moving because there was a problem, maybe another culture came along and assimilated those who were there. Some types of assimilation may be as follows

The area could be a site for wild magic. Maybe the mage’s council evacuated the site so as not to be responsible for magical mishaps. Instead of disallowing magic use at all, they figured that it would be better to abandon the town.

Or, perhaps, similar to the Force of Nature episode of “Star Trek, The Next Generation,” maybe too much magic use in an area has warped reality itself. What happens might make reality feel like an M.C. Escher drawing.

By using abandoned sites as a springboard to drive the plot, you can make better use of your game’s locations. Look out for part 3 of this series soon.