How to Make A Basic Conlang, Part 2: Nouns 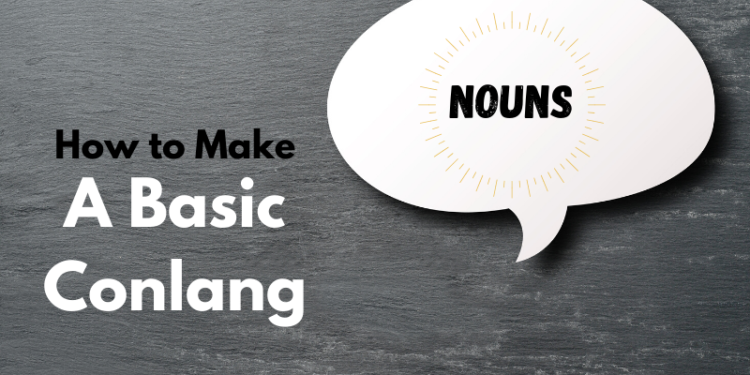 Last week, we tackled the first step in creating a constructed language: choosing the sounds. It was also pointed out to me that an example lang would be hugely beneficial, so here is my phonology for the Example lang. I also generated a few words for us to play with today.

I decided to create a language for halflings. I decided to see what would happen if I followed the suggestions I listed out in the last article, so here is what was generated:

The consonants will be transcribed into latin letters using the IPA equivalents, except for /ʃ/ and /ʒ/ which will use <sh> and <zh> respectively.

I’ll use a small inventory of /i y e œ a o u/, the diphthongs /ai ei yi oi au eu ou/ and their long counterparts. Long vowels will be transcribed as doubled vowels. /œ/ is transcribed as <oe>.

The syllable structure is C(L)V(C)(S) with these rules:

The words we’ll be playing with are:

Yes, I am serious, when it comes to conlanging, the grammar (or more specifically the language morphology, or how words are arranged to create meaning) is where your language will stop being English but with funny sounds and become a true Conlang. This is not an exhaustive article on all the possibilities, but the goal is to have a conlang more or less hammered out by the end of the process.

I am going to break up this section into Nouns and Verbs. We’ll look at Nouns this week. I’ll also be using an example lang to try to help illustrate some of the concepts. Please let me know if it helps or if it just adds more confusion.

First, we will make a few assumptions:

At a minimum, you will need to create strategies for how your conlang’s nouns:

You are free to create your language any way you want to, just be sure to have strategies for how your language handles situations where a speaker needs to talk about four orcs or clarify who does what to whom, and so on.

For this build, we’ll assume that our language shows those things on the noun (some natural languages let the verb do most of the heavy lifting).

Nouns can mark for number in a few ways, but as we’ve already decided that our language is agglutinating, we’ll choose some affixes to show plurality.

Your language could be like English and have the nouns only mark for singular and plural, or you can have marking for two of something (dual), three of something (trial), a bunch of stuff (paucal), or even an uncountable mass of stuff (collective), or just one of something (singulative).

Once you’ve chosen what kind of numbers you want your nouns to mark for, let’s choose a strategy:

Let’s use mawi “horse” as an example.

I’ll decide to use an infix –s- to mark a simple plural (ie. more than one). I’d get maswi for horses.

But what about a word like tus “hand”? Maybe in an instance like that the infix becomes a prefix, giving us situs “hands”. It could be that the si- prefix become so associated with “hands” that it becomes a dual, used for the words for anything that regularly comes in pairs (hands, eyes, feet, moons).

So a new pluralizing strategy gets invented and the suffix -an from the word for “many” tan is shorted and gets smooshed onto the end of words.

So now we have three plurals:

Case is how we tell what job a noun is doing. Is it the subject? The object? The indirect object? Think about how in English we have the forms I and me, for the first person singular, and when those two forms are used.

Let’s have these basic cases. More can be added as you develop the language:

The Nominative marks the noun as the subject. It does the action of the verb. You can use any of the strategies we discussed in number to create a case marker, or you can choose to leave it unmarked, like in English. Generally its either the nominative or accusative that is left unmarked.

For Examplelang, let’s go with a suffix -(a)r where the a in the parenthesis is added if the noun ends in a consonant.

The accusative marks the object of the sentence, who or what the action is being done to. Because our language is agglutinative, we’ll choose one of the above affixes or we’ll leave it unmarked.

Let’s go with unmarked for Examplelang. So then mawi can be used to mean “horse-acc” and is probably the default case it is in when cited in a dictionary.

The genitive is the possessive case. It shows who has or owns what. It can also be used to show that something is composed of something else or from somewhere. Suffixes tend to be the most common kind of affix, so let’s use another one here to create -oerra, and let’s see how it applies to some nouns.

As far as where the genitive noun would appear, wikipedia rescues us again! In SOV languages, genitive noun phrases tend to go before the possessed noun, treating it like a kind of adjective (which also goes before nouns when an SOV language marks nouns instead of verbs for things like case.) Let’s look at some examples:

When we get things like how the final /u/ or mjotou runs into the <oe> of the suffix, we can decide to drop a vowel, or add a sound! Let’s say that in cases where the suffix is between a vowel like /i/ or /u/ and a consonant, the vowel becomes /j/ or /w/ respectively, so we’d actually get:

It can be helpful to think “the hand of the man” instead of “the man’s hand” to get the right words declined and in the right order.

The dative indicates who receives or benefits from an action. Let’s do another suffix, –ky.

Tavkky !! Oh no! We have an illegal consonant cluster here! So let’s add an extra vowel to break these up. Let’s go with good ol’ /a/, making the suffix –(a)ky and giving us:

Woo! All basic cases are done! Next week we’ll look at verbs.

Beyond the Character Sheet, P1