How to Make A Basic Conlang, Part 3: Verbs 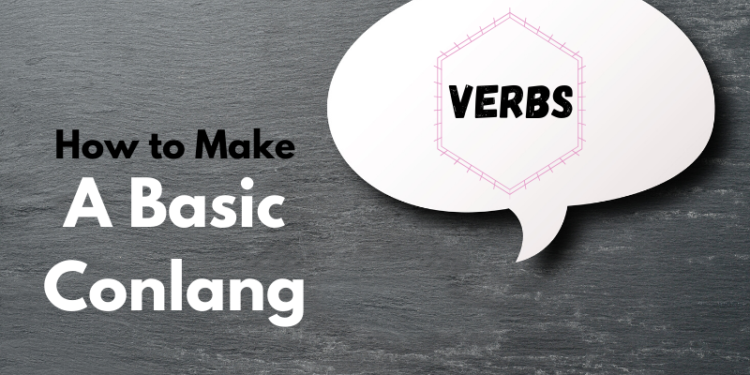 In the previous articles, we looked at how to create phonology for our language and we began creating some morphology for nouns. Today, let’s create some for our verbs.

Verbs are “Big Chonky Bois” as the kids say, and there are so many options of what you could do. The ones I present here are by no means the only one. Do your research to see what natural languages do, and what other conlangers have done. You can even use a tool like Vulgar lang to generate a grammar quickly and then edit out the bits that you don’t like or change them to suit you.

Besides showing what action occurs, verbs can be marked for the following:

Some languages mark these on verbs, some don’t at all, but most will show something of each.

Person means who did what to whom. Some verbs, like Spanish, mark this on the verb mandatorily. Others, like English, use pronouns. However, even English has remnants of an older system, still shown in the third person singular (ie. wants).

Spanish will also combine the other three components into a single ending, which is called fusion, but with our Examplelang for Halflings, we’ve established that it is agglutinative.

We have also established that we mark nouns to show what role they play in the sentence. This means that our verbs likely won’t have much or any person marking. Languages will generally put in the repetition of information, especially if it is important so that the meaning can be successfully communicated.

So, let’s determine that our lang will mark for person, but it only marks for the agent (or do-er) of the verb phrase. This corresponds with the noun in the Nominative case. We also don’t have grammatical gender in our language, so we can use the following as our standard persons:

We can also add a Fourth Person which is used when there are two third-person referents and when non-living nouns perform actions (like weather, rockslides, or emotions).

We can also decide on an order for our verb endings, creating a template to use when conjugating verbs.

Let’s keep it simple and have the template be:

This is good to start with, but it makes a very regular verb conjugation, which isn’t very natural. You can learn more about adding irregularity with Biblaridion’s great video on that subject.

Here is a table of our pronouns in the accusative case and verb endings:

Notice how the plurals are all made from the pluralization strategies that we developed last week. There also isn’t a plural of the fourth person. I could have made one, but I decided that for this language, the fourth and third-person share a plural.

Let’s try these out on some of the verbs, hjyst “eat”, topp “help”, vota “give”. Keep in mind our word order of Subject Object Verb.

He helps me. Y’all eat it You give a horse to us

Time to relax and get Tense. (hahah I’ll show myself out)

Tense shows when the action happened. This is often combined with Aspect, and some languages don’t use it at all. The three basic tenses are:

Some languages mark for all three, some just for one or two. Others might group things into the past and nonpast, where others have future and nonfuture. Some make even finer distinctions, like recent past, remote past, near future, today, and more.

Starting off, let’s go with this:

Let’s test this out on the same sentences we have above.

He helped me. Y’all will eat it. You give a horse to us,

Notice how the last sentence didn’t change in the present tense.

Aspect shows how the event extends over time. The two basic aspects are:

These are often combined with tense to create multiple aspects. For now, we’ll just stick with creating some aspects and you can play with what different combinations of aspect and tense might make. What is an imperfective in the past? A habit maybe?

For our Examplelang, we’ll go with these suffixes:

Mood is used when the speaker wants to convey their attitude about what they are saying. Is it a command, a request, a desire? These things can be marked on the verb. Some languages have a ton of different moods and feel free to add as many as you’d like. Others accomplish what mood does with verbs. English does both.

Let’s add these basic moods to our Example lang:

The Imperative in Examplelang will be made by a helper verb, au which takes the markers for person, tense and aspect, and puts the verb describing the aspect into the subjunctive. Au derives from the verb hwaus which is still used to mean “request, ask, plead”

The Subjunctive is made with the prefix je-. Pretty simple!

The Interrogative is made with the suffix –ri.

Let’s see these in action:

Will you have given me a horse (tomorrow)?

Give me your hand!

(a little long, but it can be iterated on and improved)

If I eat a horse…

Alright, now we have some basic grammar for our verbs. Next week we’ll look at building your lexicon. Keep reading about grammatical principles and exploring other languages to help you shape your language into one that is unique and enjoyable.

Please ask any questions about this process below and I’ll answer them!

Using Tattoos in Your Game