Using Tattoos in Your Game 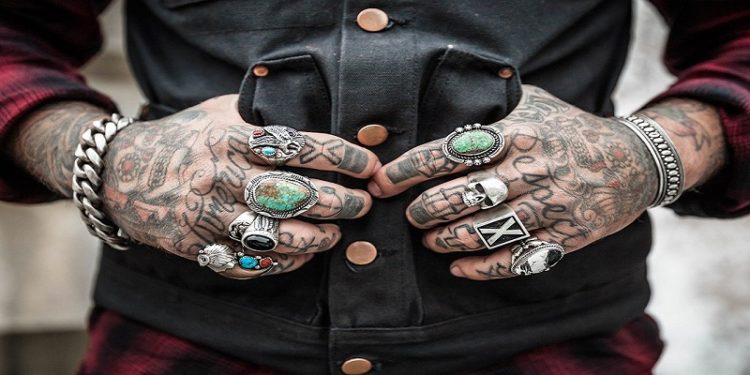 Tattoos are often very personal things. They may represent a person’s oath, be a memento, or a way to access their power. But why limit it to those types of things? With a bit of thought and preparation, tattoos can be so much more. Read on:

Let’s go with this definition of tattoos

Tattoos are designs in the skin made by inserting either indelible or temporary ink, dyes, and pigments, into the skin to change its coloration. They fall into three broad categories: purely decorative, symbolic, and pictorial.

While it’s beyond the scope of this article to present a system of tattoos themselves, the tattooing kit, or the inks available, Unearthed Arcana has playtest material, where this Imgur page has a cool system, as does the Danddwiki site have homebrew variants.

Every class in D&D can benefit from tattoos from a plot perspective. They just have to be used creatively and uniquely suited to each class.

Artificers are masters of tool use. It’s only natural that they would both create and imbue tattooing implements in their work. Maybe if they’re experimenting with flesh golems, their creations can have the magical tattoos. Or perhaps they could have temporary tattoos that they give people which change the people’s appearance enough so they could commit crimes undetected. Finally, the artificer could do high-tech infusions with tattoos that could count as a form of cybernetics.

Barbarians and Shaman often come from savage cultures. And even when they don’t come from the wilds, their culture usually still will come with the trappings of totems, mysticism, and superstitions of a backwater culture. These features make them perfect to have tattoos of power or to ward against evil marked in their flesh. Maybe the people of a tribe worship a particular monster. To feel closer to their chosen deity, they tattoo or scar themselves to look like it.

On the other hand, if you run a more cerebral or mystic barbarian, this class might suit you perfectly.

Bards could have symbols tattooed on them to summon their instruments. The tattoo would work identically to the “Shrink item” spell. If the character went with some sort of piercing or brand, it would work in the same way. Another way this could work is that the tattoos could show his different adventures.  He could even have it set up so that as he touched various tattoos on his body, the scene would come to life in vivid detail for everyone to see. How accurate to reality these illusionary recreations would be are anyone’s guess.

Clerics may have tattoos of their holy verses inscribed on their bodies. These tattoos could be how the cleric gets their power. The tattoos aren’t a “prayer book,” akin to the wizard’s spell book, but it could serve as a conduit to allow the deity to see what’s around him. The more of the cleric’s body gets covered in scripture, the more power the god is willing to give him. What this means as far as game mechanics goes is that the cleric will have to pay for special inks and have someone from their order tattoo them or ask one of the party members to do it for them.

Another way that your adventuring party could showcase tattoos is to have pictorial representations of their animal companions tattooed on their bodies. The concept works for druids, rangers, and magic casters that have familiars. Perhaps, the tattoos are the animals the druid likes to turn into the most, with each one having a story. Maybe the tattoos could signal their companions that their presence is wanted. Conversely, on the ranger side of things, perhaps the tattoo they have is an ever-growing one, tallying the numbers of hated enemies they have slain.

Fighters might tattoo themselves for a few different reasons. Maybe they’re a part of a company of warriors. It also could be that their tattoos are an indication that they all have a unique skill or feat. Perhaps their tattoo is a sign that they are the best of the best. Conversely, it could be a mark of shame or a secret. For instance, a fighter might have a tattoo to remind him not to drink. The tattoo could be your world’s version of the “Alcoholics Anonymous” symbol.

The tattooed monk has become a classic trope. There are a couple of versions that can be found here and here. The idea behind the tattooed monk is that they tattoo themselves to gain unique powers not accessible to their brethren. The tattoos, when used by a monk class, are often not considered magical, but Ki based. The fact that they’re not magic allows them to work in an anti-magic zone.

The party’s rogue can benefit from tattoos as well. The tattoos could be a sign they’re a member of the local thief’s guild. Or maybe they’re an assassin that. Conversely, the tattoo could be showing the character was a prisoner at one point in their lives, & it is their prisoner number.

Instead of wanting to carry a spellbook with them, a wizard might indelibly inscribe their spells on their skin. Conversely, a sorcerer might tattoo herself as a mark of her heritage/ bloodline.

The tattooed warlock could be the mark of the contract. Furthermore, the tattoo doesn’t necessarily need to be in a place that is skin. In Fullmetal Alchemist, King Bradley has the mark of the homunculus on his eye. To hide that fact, he keeps covered with an eyepatch.

Tattoos don’t need to be limited to the PCs and humanoid creatures. As long as the creature in question has skin,  tattoos are an option. Even if it doesn’t have skin, “Unearthed Arcana” playtest material has a particularly fascinating idea:

These items needn’t be limited to just tattoos. They can instead be other body modifications such as brands, scarification, birthmarks, patterns of scales (think Dragonborn – see the following articles for inspiration: part 1, part 2, part 3), or any other cosmetic skin adornment or alteration(, including piercings). Consider the object a magical body modification is bound to instead of tattoo needles, such as branding irons or enchanted dragon scales

Monsters might have their own language of symbols, markings, or tattoos that gives the players a mystery to solve. Conversely, they could observe humanoids and copy their symbols. In either case, it’s up to the PCs to figure out what’s going on.

The tattoos (piercings, scars, etc.) should be thought of as the same categories of magic items: [common], [uncommon], [rare], [very rare] and [legendary].

As you can see, there are many ways to use tattoos in your game. Take a few of these ideas and change them to suit your gaming world. If any of these ideas struck a chord, and you want to use them, feel free to tell me in the comments section below! Look out for part 2 soon!