Using Tattoos in your game, P2 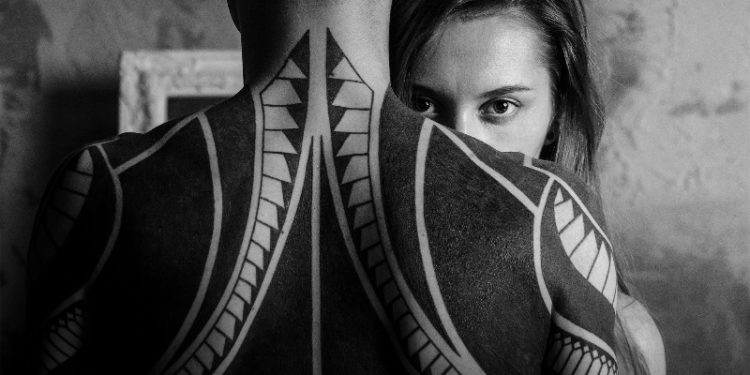 Magical Tattoos are complicated things both from a mechanical, social, and religious aspect.

Last time we gave a definition of a tattoo, examined how different classes might use tattoos, looked at monster tattoos and tattoo power levels. This time we’ll discuss the following topics:

Magic in D&D 5e is based around the character having only so many body “slots” for magic items. It’s also based around the need to “attune” said items. Tattoos, et al. are a magic item for all intense and practical purposes. DMs could rule one of 10 ways:

Note: how magic items and magical tattoos react to one anther could be dealt with on a case-by-case basis. One combination might work well together, where another is problematic.

Tattoos in real life aren’t removed easily. A person who wishes to have a tattoo removed, needs to have a laser evaporate the inks from their skin. Therefore, tattoos in game should be equally problematic to remove. The following methods are some possibilities when it comes to removing the tattoo:

Religions can have a love-hate relationship with both normal and magic tattoos.
Some religious organizations (such as the tattooed monk) require tattooing as a part of initiation. The initial tattoo might not do anything. It might simply be a test to see if the monk in question can withstand the pain of being tattooed. The tattoos will eventually allow the monk to access greater powers, but these must be learned.
In other religions, the tattoos could be a sacred link between the followers and their god. Even if not magical in the direct sense of the term, tattoos that mention a deity’s name allow the deity in question to be able to see around the follower. The more people with tattoos, the greater sight the deity has. Even if the character having the tattoo is unable to speak, simply touching the tattoo with the deity’s name may bring their attention of the deity to their follower. It may even allow the deity to work a miracle in the absence of one if its clerics.
Others religions not care either way.
Still others may throw you out for having tattoos or force you to get them removed, as the deity in question (or the people running it) finds the very idea of permanently marking yourself with ink disturbing or insulting.
Some branches of the same religion may even have a different opinion of them than others. When deciding how a religion will react to tattoos, consider an in-universe explanation as to their reasoning.

In modern times, heavily tattooed people are given strange looks, outright rejection, or even fear by some groups and acceptance by others. Given that PCs are adventurers, and oftentimes from foreign lands, they may get a “free pass” if the tattoos are small or inconspicuous. Such tattoos are able to be covered by clothing or armor.  On the other hand, if their entire body is tattooed, the tattoos they have are large or not easily hidden, or made of controversial symbols (think evil magic or unfavored gods), characters may have problems. The tattoos can even cause the characters to get arrested or put under protective custody.

Tattoos don’t need any special activation. Even a character without any magical aptitude can activate them. It can be keyed to a simple act of will, a command word or phrase, or even a touch with the intent to use it. Once activated, the magic imbedded in the tattoo comes to life.
If the tattoo is based on a spell, the spell is activated per the spell’s description. When the tattoo is chosen, the spell’s level is chosen as well. In this way, tattoos are similar to a scroll, but one that can’t be removed from the caster’s body. Note: if the spell the tattoo casts needs concentration, the tattoo’s user still needs to concentrate on it.
If the tattoo is the use of a skill the tattoo’s wearer adds their stat modifier and proficiency modifier and uses it as if s/he had it naturally. Tattoos might also have a passive “always on” bonus to a skill. On the character sheet, note the tattoo as the reason for the skill or its increase, so when it’s removed or unable to be activated again for awhile.
Similarly, if the tattoo is based on a feat the user can perform it, provided they meet all the  prerequisites. If the tattoo’s user no longer qualifies, they lose access to the feat the tattoo granted.
On tattoos that can be activated multiple times daily, there is a cooldown period. The tattoo typically recharges on a 6.

Because a tattoo is a permanent feature of a character, it may be useful to add features, skills, advance the damage die, range, etc. as opposed to removing the tattoo and putting a new one in its place. Unfortunately, the process is neither cheap nor easy. To add something new to a current tattoo, the artist must have ink and other misc. materials on hand. The cost for both the ink and the service itself is usually quoted at  per rarity  level of the tattoo.  This price excludes the cost of the service itself, which in itself may tens of thousands of gold pieces per rarity level. Then they must make an Arcana roll equal to 10 + the rarity of the tattoo (e.g. +1 common, +2 uncommon, +3 rare, +4 very rare, +5 legendary) + the 1/2 the character level, rounded down. For instance, the artist who is trying to advance a 15th level character’s common tattoo would need to beat a DC 19 (Arcana) roll. Small adjustments such as increasing the level or a spell may take several hours, whereas more extensive modifications may take several days of careful inking.

You can come up with new tattoos for your game. When you’re doing so, consider the following questions:

Cursed tattoos are when something goes wrong with the tattoo. If you’re familiar with the Naruto series, Sasuke’s “cursed mark” could be considered such a tattoo. It was forced on him unwillingly by Orochimaru biting him.  Some possible curses could be as follows:

How to Make a Basic Conlang Part ...