Building a Pantheon: How to Choose Your Gods 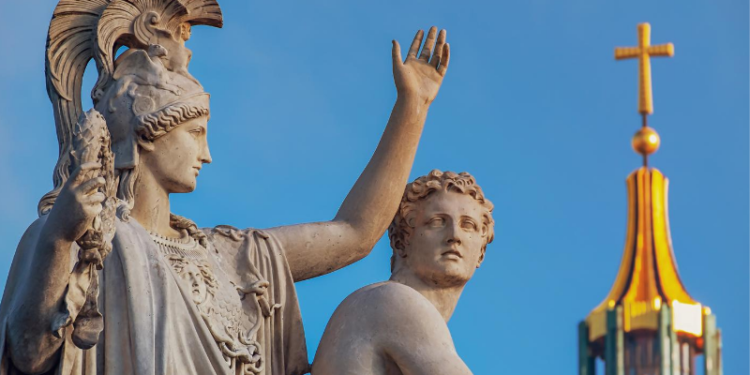 Today we start a new series in worldbuilding focusing on a heavenly subject: creating pantheons for your tabletop roleplaying game. When creating a new world to play Dungeons and Dragons 5e, or any fantasy TRPG, the gods and the role they play in the world can be the key to an entire campaign.

Through this series, we’ll be looking at what to consider when creating a pantheon for your setting and giving it depth. Shaping the gods to be something more than a game mechanic for the clerics or paladins can give yourself storyhooks and give the game world a better sense of reality.

We’ll also develop a pantheon of our own throughout as an example. Let’s start with what to consider when first setting out in creating a campaign.

Before you even begin creating individual gods, you should consider what base assumptions about how the gods interact with the material world. Start by answering these questions:

For the purposes of this article series, let’s go with the following assumptions:

Gods Reflect The Society They Originate From

If you truly want to create a unique feeling pantheon, you need to know about the society that worships them. In our game world, the gods cannot directly intervene, so the perception of the gods is shaped through the lens of culture. Definite facts about them are hard to come by, and often their true nature and motivations are incomprehensible to mortals (and players).

So let’s start by establishing three essential aspects of our society. Let’s start by picking a race to create a pantheon for. How about elves?

What Does The Society Value?

Each society has values that help define and shape it. These values show up in their art, in their clothing, and in what material goods are prioritized to be made.

Values can be something like Hospitality, or something more concrete like Nature. These values can help serve as a launchpad for what deities to create to reflect these values back to the society. Once chosen, you can easily create a god for each value and call it a day.

Or, you can combine them in unique combinations so that each god embodies multiple aspects of what the society views as worthy, good, and an example to be lived up to.

For the elves, let’s stick with some traditionally elven values:

Of these values, the most important is Excellence. After all, elves live for hundreds of years, so a step beyond mastery into excellence is highly valued. Those who do achieve this excellence are held up to be exemplars of what it means to be truly elven.

So, using the ideal of Excellence as a primary one, we can create gods that embody true excellence in each of the other values. We can also combine some archetypes to create some truly mythic potential gods. So let’s go with:

You can create gods directly from each of these potential gods, or refine them by adding in the material conditions of the society.

We can also create some mythic archetypes based on areas of production required to run the society. Basically, think about what activities the members of society undertake in order to reproduce or continue society. What do they do to make life happen?

Elves have four primary activities they do to survive:

So from here we could mix in the primary value of Excellence and create gods that are:

Combining these with the archetypes we created out of values can give us our initial pantheon (I also started making a simple elvish naming language to create the different names of the gods):

Next week we will continue the series with how to create universal gods. Let me know if you think this method helps create new and fun pantheons for your game!