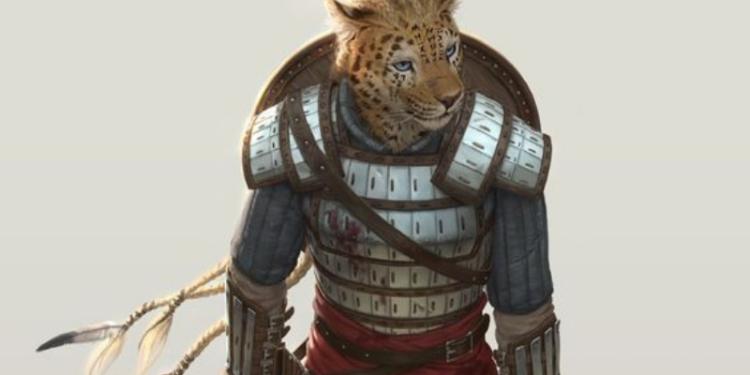 I’ve recently become obsessed with creating characters on D&D Beyond. I lovingly craft them, going back over feat choices, spell selections, equipment, and more until I reach a point of madness because these characters will likely never see play. All the new options in Tasha’s Cauldron of Everything have only enhanced this habit.

In this new series, I’ll be spotlighting some of the characters I’ve made and highlighting why they seem like fun to build. Some might be optimized to do something really well, but I’ve always approached any tabletop roleplaying game not so much concerned with numbers (maf’s hawd uwu) but thinking about how much fun I can squeeze out of a session. So, let’s start with Sassa the Lorehunter, the tabaxi paladin/rogue. Check out her character sheet here.

Raised on the hot savannahs, Sassa was born to a pride of wandering minstrels. She grew up strong on a diet of milk, meat, and stories. One day when Sassa was just a cub they stopped in a village where bookbinders lived. The bookbinders told of a city called Atuk where a library stood so vast, it was called the Sea of Scrolls. Entranced by the knowledge it held, she left her pride and traveled with the bookbinders to their city.

When they arrived, Sassa immediately went to the library and begged the monks there to tell her all the stories they knew. They agreed, and so she began her training as a scholar.

As she studied, she learned of the planes beyond the Material Realm and of the guardians who defend this reality from others. Intrigued, she went to the temple in Atuk where their order maintained an outpost and inquired about their mission. The leader of the Watcher outpost, General Mardu i’Kav told Sassa about the realms he had seen, the battles he had fought in, and tales stranger than any other she had heard.

Sassa’s appetite grew and she yearned to witness such legendary places as Sigil, or the City of Brass. She begged the general to train her as a Watcher so that she might travel to these places and defend the world. So Sassa took her oath and became a paladin of the Watchers.

For many years she fought against the extraplanar forces that threatened the world. In that time, she acquired some skill in stealth and subterfuge that made her a natural spy. In battle, she writes her own legend with blood as her ink and her rapier sharper than any wit as her quill.

Sassa is built to be mobile and a master at wielding a rapier and shield. I took the Dueling fighting style so that she can be as potent as possible with a weapon, while still maintaining an AC of 18.

At level twelve, she has the mobile, charger, and defensive duelist feats. This combo is meant to enhance the Tabaxi racial trait, Feline agility, which allows her to double her speed on one turn.

The decision to choose rogue was with the intention to synergize with her mobility and natural stealthiness to create a hybrid sneak-tank.

She has a +10 to stealth and swashbuckler allows her to get sneak attack when squaring off solo against a target without disadvantage. I also really like the CHA buff to initiative rolls further enhancing her speedy-nature with mechanics.

In combat, she prefers to pick off solo targets, zooming in, stabbing away before getting out, or returning to help squishies. And to just further enhance that, I gave her a Ring of Free Action so she can ignore difficult terrain and magic slows.

How I Designed the Build

I intentionally build Sassa with two thoughts in mind:

Tabaxi and paladin? Cool! What would that look like?

I loved the bit about how Tabaxis treasure knowledge above everything else. So what would a curious kitty pledge and oath to as a paladin? The Watchers of course!

Apart from reminding me immensely of Giles from Buffy, the Watcher’s whole defense against incursions from otherworlds was just so cool. After adding that subclass, I stopped initially and thought, “This is neat, but how can we make it Cool™? What class can we multiclass into that would be wild and see what happens?”

So I chose rogue, thought swashbuckler sounded neat, and then was delighted to find that it synergizes with a paladin in a lot of cool ways.

It also gives Sassa more versatility as she can go in with a rogue to provide backup during scouting, or try to convince a shopkeeper that she wasn’t stealing, honestly, just needed to collect some merchandise to scan for uhm… the devil, yeah, right the devil.

I doubt I’ll ever truly play Sassa, but I hope she inspires you to make a character with options you’ve never explored. I used to be hugely worried about min/maxing a character, afraid that I’d be left behind when everyone else is putting up huge numbers. But that’s changed recently, now that I’ve built quite a few never-to-be-played characters.

A satisfying character is one where you are having fun playing them, and for me, that comes with connecting with the spirit or outlook of that character. I can see myself loving roleplaying as Sassa, eager for knowledge, despite not being very bright (8 INT, oof!), kind and loving to her new pride, and ruthless against evil.

I’d love to hear about your own characters you’ve made. Tell me about them in the comments below!