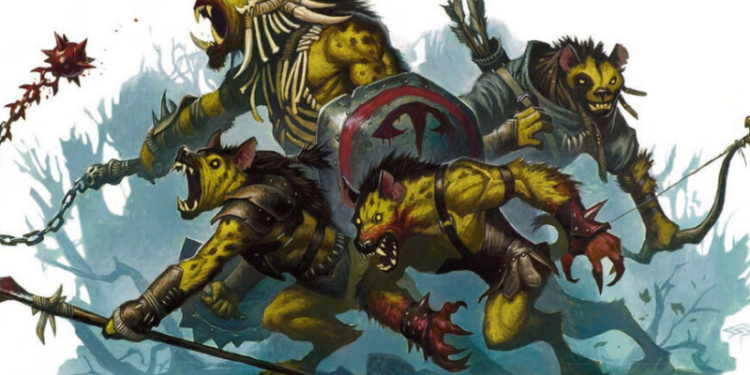 Last week we took a look at Orcs, and the weeks before we looked at Goblinoids and tactics they might use. This week, we’ll dive into the gullets of Gnolls. How do you take an enemy described as walking stomachs and anger and make dynamic encounters with them? Are such kinds of enemies capable of complex motivations and tactics? Do they even benefit from adding those layers into an encounter?

Finding the Story of the Gnolls

Gnolls are ravenous humanoids that have a demonic origin. They are more like plagues of locusts than the regimented militancy of hobgoblins or glory-seeking raids of orcish raiders. They are not described in the Monster Manual as making much of any kind of civilization.

As written, gnolls are incapable of anything but wanton destruction and devouring everything (and anyone) in sight. So how can we find a story behind the gnolls invading our precious kingdom?

Start with the why of their presence in your setting and then expand from there.

Why are the Gnolls there?

Gnolls have a very basic motivation: consume and move on. However, this makes them a potent weapon in the hands of a Big Bad. Who is directing their efforts? Or, are they attracted to something demonic, or some dark magics that are being used in the kingdom?

Here are some other potential reasons to spark your imagination:

Gnolls are motivated by a hunger for violence and flesh. This makes them great enemies for those groups who like to fight encounters to the last man. Gnolls won’t back down even if they are wounded or the last of their group. They will keep fighting to the last.

This can be translated into a great adventure where the party is being hunted by a pack of gnolls. The party could respond to a report of the gnolls, and encounter a small group. However, after defeating these gnolls, more and more show up. Now they have to do a skill encounter to avoid the gnolls as they hone in on their position.

Other motivations can depend on the state of the pack when the party encounters them:

What do the Gnolls know?

While gnoll packs are not as disciplined as hobgoblins, they could be modeled on how army ant colonies work. There can be single gnolls or small bands of scouts that are sent out to find food and return to lead the greater pack to the village.

Gnolls likely are aware of nearby settlements and will avoid heavily fortified areas in favor of easy prey. They may even adapt their tactics as they encounter the party, bringing nets or casters to disable and split the party.

Gnolls are a great example of how a seemingly basic motivation can be developed to create a complex and challenging enemy.

Next week we’ll look at Mindflayers.

Art by Wizards of the Coast

Candlekeep Mysteries is the Next D&D 5e ...