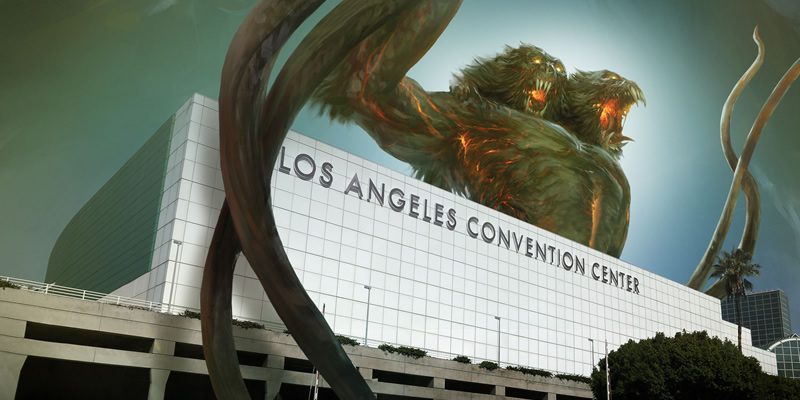 Sword Coasts Legends and zillions of other games will be on display at this year’s E3 in Los Angeles. E3 is an annual video games conference held each year where the gaming companies preview their upcoming games and hardware. Wizards of the Coast, n-Space and Digital Extremes are all in town to show off Sword Coast Legends. Read the feature on D&D, visit the official site or check out some of our coverage below.

With the video game heavyweights throwing huge properties around, it will be tough for Sword Coast Legends to get any heavy coverage, but we’ve gathered whatever we can find here:

Sword Coast Legends seeks to be your digital replacement for the traditional table-top experience, and for all intents and purposes, it succeeds. The early build here at E3 impressed us immensely.
Read Article

Whether you prefer the current World of Warcraft digital mode of play or the old school “hand me my bag of many dice” AD&D mode of play we have some really good news for you. I was able to take a trial run today at E3 with the teams from n-Space and Digital Extremes for the new Sword Coast Legends game.
Read Article

Ever since Sword Coast Legends was first announced, this is the mode I’ve been the most excited about. We know the single player campaign will be, at worst, solid and entertaining. The big question mark has always been the innovative new Dungeon Master mode and it looks like it very well may live up to the hype.
Read Article

PCWorld –  Why Sword Coast Legends is the digital Dungeon & Dragons RPG you’ve been waiting for – June 17, 2015

Sword Coast Legends is trying to fill some pretty big shoes. Developer N-Space talked about trying to harken back to the days of Baldur’s Gate and Dragon Age: Origins, with strong roleplaying combat in an isometric space…
Read Article

“Overall, Sword Coast Legends has some interesting options for those who like D&D but aren’t interested in D&D MMOs that already exist, but I’m still not fully sold on the product yet. It feels like a simpler version of Neverwinter with a slightly different POV. The single-player aspect of the game may turn out to be good, and the DM job seems much easier than Neverwinter’s set-up, so if that’s the side of the game appealing to you, Sword Coast Legends should be on your radar. If you’re looking more for a rich, online, D&D experience, I’d say remain cautious at this point to see how the playerbase and mechanics sort themselves out once the game is live.”
Read Article