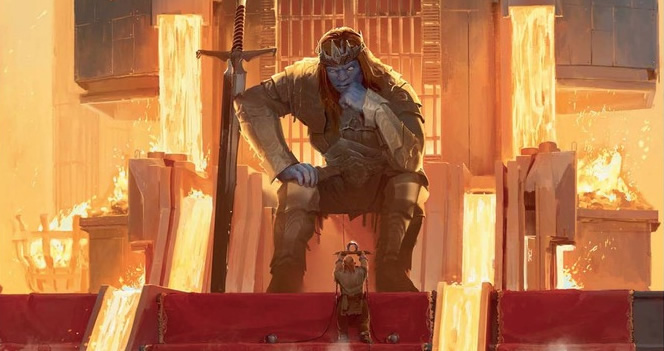 Today we’ll tackle giants. Giants evoke the mystery, terror, and fantasy that players have come to expect from Dungeons & Dragons. These creatures are close to dragons in terms of the legendary threat they pose to the players. Like dragons, they can be allies or enemies and tend to live in that gray area that makes them a great addition to any campaign.

If you missed our previous articles, check them out here:

Finding the Story of the Giants

When deciding to use giants in your campaign, start with what role they’ll play in your story. They could easily be enemies or allies to the player or be a little of both. A giant could serve as a great patron for the party, serving as a source of adventure hooks and rewards. They are heirs to a broken empire that exists more as a myth than anything, creating opportunities for the party to uncover giantish artifacts in tombs as old as the world itself.

A giant as an antagonist can have motivations similar to lesser mortals, from conquest and domination of smaller races, to bring back the glory of the lost giant empire of Ostoria through the force of arms. The giants could be uniting around a powerful giant warlord, causing a coalition of monsters who normally would be enemies to form to stop them. The players could find themselves in an uneasy alliance with a red dragon, a hobgoblin warlord, and a beholder.

Dragons are the traditional rivals of giants. This can make for an epic campaign in which the players are caught between a dragon-giant war and must choose sides, or find artifacts to end the war and preserve the unfortunate kingdom caught in the middle.

Here are some potential motivations for a giant-centric campaign:

Why are the Giants there?

Now that you have a story connection for the giants to be in your campaign, think about why they’re in the specific area of the adventure. A giant is hard to miss, and your players will likely want to find out what the giant is doing there. Depending on their level, they may want to try to kill it too.

A lone giant can be an easy target for a group of adventurers, so be sure to include some minions to support the giant. A supporting spellcaster to divide the party with wall spells, or buff the giant can make the fight more dynamic. You can add a few ambushers who appear mid-fight to target squishies so that the players can’t just focus down the giant without having to expend resources to protect themselves.

A giant (with the exception of hill giants) is a complex, thinking being. By creating a strong motivation for the giant, you can shape combat around them working to achieve their goal while fending off the players.

Even a hill giant would likely try to retreat rather than fighting to the death and could have bullied a few goblins or kobolds to act as minions. And why not make your hill giant uncommonly intelligent? They could instruct their kobold minions to build traps, kidnap locals, and demand food as tribute in order to sate their hunger.

Have a decision tree for your giant that you can use to help guide combat. For example, say the players have found a stone giant in his lair:

What do the Giants know?

Giants can be great sources of knowledge and lore for the party. An entire adventure can be around finding a storm giant in order to gain access to their prophetic abilities or to learn an obscure piece of lore.

A giant will likely keep tabs on the area that the giant has claimed as their domain. If the party begins making waves by taking out their minions, they will spend time observing the party and creating a trap tailored to them, or ways to negate their most powerful abilities.

Keep in mind that if your giant has a piece of vital quest info and your players kill it, have a plan for how to get that information to the party.

Next week we’ll fly high with some Dragons.