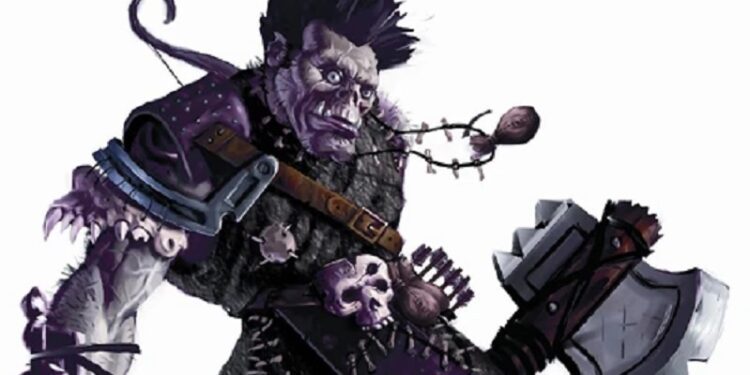 Welcome back to the History of the Barbarian, this time getting into the barbarian of D&D 3.0 and 3.5. Why did they drop the A? Because they finally admitted that the Accidental Death & Dismemberment wasn’t so Accidental – especially for the Improbably Large Axe class! Do you like d12s? I hope you like d12s, because this class is very much about that die size, in particular.

After writing Part Two, Friend of the Blog Jared Rascher reminded me that 2e’s HR1: Vikings Campaign Sourcebook has a Berserker class that actually is the bridge between 2e and 3.0 barbarians. I’m covering that first, because in this series I’m terrible at being done with an edition, apparently!

There’s a pretty good amount of flavor and historical-background text to go with this class. My inner lit nerd who studied the Prose Edda for a class in college appreciates the paragraph on the Icelandic sagas!

The shapeshifting thing mostly doesn’t carry forward, though the thematic connection to 5e’s Totem Warrior barbarian is interesting. The berserking mechanic – other than the continuing difficulty of initiating the berserk state – reads like an odd mashup of 3.x and 5e barbarian rages. On one side, you have the Strength, hit point bonuses, and bonus to saves against charm and mental attacks; on the other, unarmored defense. As long as you sometimes have enough forewarning to start going berserk before a fight (so that you’re not always missing 1 or more rounds of battle to doing nothing), this looks like a solid addition to the 2e class roster to me.

This is the first appearance of the barbarian as a core, Player’s-Handbook class, with Krusk the half-orc as the iconic barbarian. He has some weird posture problems, but in the main I like Krusk. Barbarians were middling-popular in our 3.0 games; they face the problem of competing with fighters for party role, in the edition where fighters get to play the feat game wildly more than everyone else.

The features combine to make you a high-damage, high-hit point killing machine that is still pretty easy to hit and pretty likely to just be dead at the end of their rage. Still, the additional attack and damage bonuses of +4 or +6 Strength are substantial, especially as you make more attacks in a round. On the other hand, recalculating your character sheet as your Strength, Dex, Con, AC, and Will save bonus move all over the place is a headache and a half.

Lastly – notice the “dead” levels: 3, 6, 7, 9, and 18. Four of those are levels you otherwise gain a feat (assuming you’re not multiclassing), and 6th also grants you an iterative attack. That’s still a design element that’s going to change in the revision.

As a side note, the sohei class of 3.0’s Oriental Adventures blends the barbarian’s Rage mechanic with the monk’s Flurry of Blows mechanic to create Ki Frenzy – bonuses to Str, Dex, and speed, as well as an optional additional attack (but all of your attacks for the round are -2 to hit). I mention this only because I had a great time as a sohei from 1st to about 10th level in a campaign I played in college.

The Background section here that discusses barbarians coming from uncivilized lands or the outskirts of civilization just reminds me of a friend of mine who played a barbarian in an Eberron game, leaning into being an Action Hero rather than in any sense uncivilized. I appreciated how that move fit the setting’s pulpy tone.

I’m only covering the changes here:

It’s a boost across the board, and becomes more noticeable as you move into the midgame. Barbarians are a giant bag of hit points, relatively easy to hit but kicking out tons of damage. I’m absolutely not getting into all of the feats and prestige classes of 3.5e that were targeted at barbarians – we’d be here all week – so I’m only commenting a bit on those found in Complete Warrior.

The Bear Warrior draws on the animal shapeshifting themes we see in HR1: Vikings Campaign. You transform into a bear (first black, then brown, then dire) and get incredible boosts to your ability scores as a result. “While in dire bear form, he gains a +20 bonus to Strength, a +2 bonus to Dexterity, and a +8 bonus to Constitution.” Yowza.

The Eye of Gruumsh is only for orcs and half-orcs who are devoted to Gruumsh and willing to put out their right eyes. The prestige class emphasizes blindness and perception, ritual scarification for natural armor bonuses to AC, blinding one’s enemies, and commanding other orcs and half-orcs in the area. It’s a concept that isn’t great for PCs (because of alignment restrictions and not having a horde of orcs to command), but it’s very powerful if it does suit you.

The Frenzied Berserker is for barbarians who are comfortable with turning on their teammates… regardless of what their teammates may think about the matter. They gain a special Frenzied Rage that gives them even more Strength bonus (+6) and an extra attack per round at their highest base attack bonus. Just a few caveats: they take nonlethal damage each round, they have an even worse AC penalty, and they have to succeed a DC 20 Will save to end the rage early. If you’re out of obvious enemies and still raging, you must keep attacking the nearest creature. You even gain extra features to make absolutely sure that your party has to fully kill you to stop you! (In short, I loathe this prestige class and the PvP that comes out of it.)

There are a few others that are equally targeted at barbarians and other warrior-types, but I’m not sure they call for individual coverage. I’m not sure we’ll see too much that relates to later iterations of the barbarian, in any case.

That’s about it for my coverage of barbarians in D&D 3.x. Rage is now their central gameplay feature, and any tweak or iteration on the barbarian needs to relate to their rage in some way. As we’ll see in future articles, 4e and 5e also emphasize rage in one way or another. As much as possible, you don’t want to be in a fight and not raging from here on out. That’s a massive shift in the conception of the class compared to the non-spellcasting wilderness warrior of Unearthed Arcana.