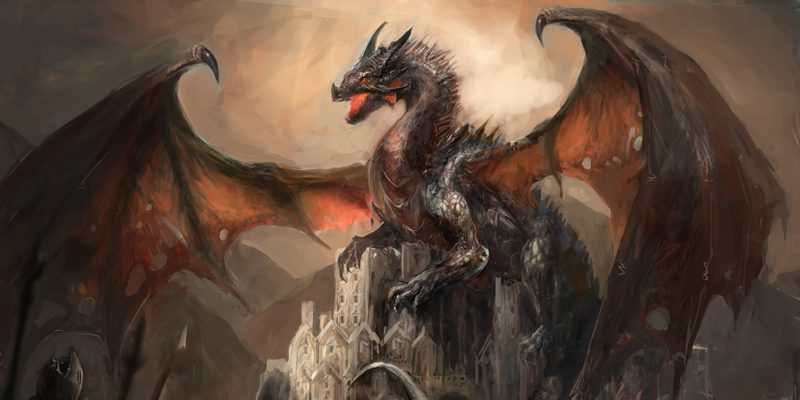 The titular monsters of Dungeons & Dragons, dragons have a central role as allies and villains in many published adventures and homebrew campaigns. They represent all the awesome magic and fantasy that the game is known for.
So how can we use these creatures beyond what is given to us in the Monster Manual?

Finding the Story of the Dragons

Luckily, the fantasy genre is chock-full of stories about dragons. Each setting has its own story about the history of the dragons and their various motivations and schemes. The question then becomes what is the specific story of the dragons in your campaign.

A dragon can easily play one of three roles: An ally, a campaign enemy, and/or an adventure enemy. Depending on where you want to take your campaign, you can have a single dragon act as all three through the course of the campaign.

Good metallic dragons aren’t the only dragons that can serve as an ally to the party. A chromatic dragon may have the need of a group of adventurers to challenge a rival, to clear room for them to grow their territory and influence. And, they might have some magic items with which they can tempt the party.

Any dragon can serve as an enemy for one adventure or for an entire campaign, depending on how big the scope of their plan is. A young dragon could serve as a great campaign villain, covertly directing the party to take out each of their rivals one by one before revealing themselves. Or an ancient dragon could be holding a tournament for their hoard, to be split among the winners. Dragons can be used like any other NPC, offering help or hindrance

What Does the Dragon Know?

Consider what the dragon might not know, or have assumed about the party. Perhaps they discount any sort of martial character and so plans very little for them, allowing for that character to shine.

What personal connections does the dragon have to the party? How can they make the encounter personal? If there is a dragon that can shapeshift into a humanoid, think about how you can use that to find out more about the party or to misdirect them.

Now that we have a dragon and a motivation, let’s see how we can shape combat encounters around the motivation. A smart dragon would rarely take a group of powerful adventurers head-on, at least not without an escape path, traps, or minions to assist.

Consider adding in a support spellcaster that can cast control spells to isolate the party from each other and disrupt their plans. Build these challenges around your party to give each of them an opportunity in the encounter to shine.

Here are some ideas:

Thanks for joining me on this mini-series. If you missed the previous ones, check them out here: