5 Ways to Use the Planes as Plot Devices & Settings 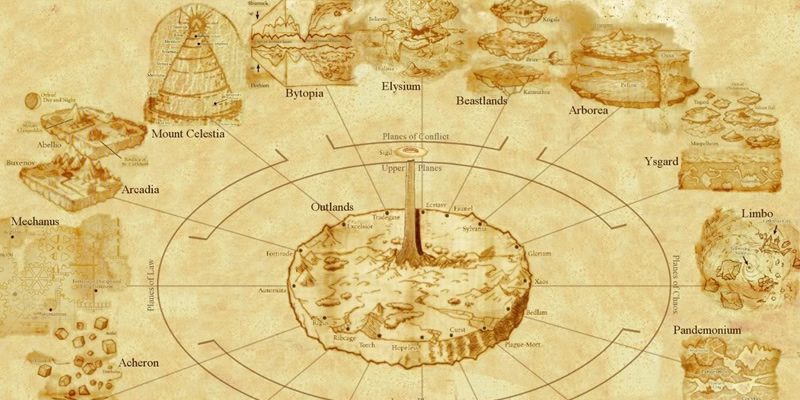 The planes are the fundamental dimensions that make up the multiverse in which a typical D&D setting takes place. The planes (typically) describe the creation of the universe, the existence of an afterlife and the breeding ground for half the monsters in the manual. It may be that you don’t want these questions answered already in your setting. It is entirely possible to have your planes be either nonexistent or undiscovered. Today, we are going to put planes in the Eye of the Beholder, and look at when they are appropriate to use as plot devices and settings in a campaign.

1) Use the planes as an antagonist’s home.

The primary use of a plane is to have it be the home base of an invading army of otherworldly creatures, or the fortress which contains a lich’s phylactery. This use of the planes typically has the PCs battle the creatures on the material plane, only to have to chase them back through a closing portal, for an epic finish where they end the monsters once and for all. While a climactic ending to a campaign, this use of a plane is usually only a brief glimpse at a truly foreign setting, whereas some planes (like the abyss or the nine hells) have whole books of material for you to use on them, so this brief interaction with the plane might only wet your appetite.

2) Use the planes as a primary campaign setting.

Another use of the planes is to have the players spend levels 5+ on them. (usually on just one of them) This is a bit extreme, but it can be a lot of fun. Players get to see strange effects and foreign landscapes they might not have seen before, and it can really throw experienced players for a loop. For example, an adventure where the players had to infiltrate Tu’narath (The capital city of the Githyanki), might require the players to spend the whole of their time developing alliance and fighting Gith upon the Astral plane.

3) Use the planes as a foreign locale.

If your typical adventure is growing monotonous to manage, try inserting elements of the planes. A high level party who has not had at least one adventure on another plane is missing an excellent opportunity for some fun, both for them, and for you as a DM. The PCs might wish to visit another plane on their own, for example to sell extremely exotic items at a market that can actually use them. The fantastic is commonplace on the planes, and so you can have some of your more bizarre ideas develop into plot hooks. This use of the planes allows for the players to know, and have access to, something beyond this world, while not actually making it a central point of your plot.

4) Use the planes to increase difficulty.

If your PCs are easily going through your terrifying temple of Orcus, healing any wounds they receive and handling your most ingenious traps with ease, it might be time to crank up the difficulty. So the high priest of Orcus finishes his incantation and transports the temple, PCs and all, into the border of the Shadowfell and the Negative energy plane, where energies of both can seep into the undead constructs. While your players might fell the shadows and wraiths that leap forward from this eternal darkness, can they do so without access to healing magic? (The positive energy might not work in this proximity) Similar use of the planes and their denizens can be used to modify the difficulty, should you require a more hostile environment to throw your PCs off their game. After all, if it isn’t challenging, then it isn’t very fun.

5) Use the planes as a resurrection challenge.

At high levels especially, it becomes easy to ignore death. Spells like revivify and true resurrection make death seem cheap and only a temporary distraction. You might choose to emphasize the soul’s journey into death by having it leave the body, only to be waylaid by devils upon the fugue plane. Devils can’t harm a soul there, but they are allowed to talk to it. They might use this right to filibuster a soul’s progress, making offer and counteroffer to it while holding it there for some “honest” debate, hoping that the soul’s boredom and impatience will make it stupid. Meanwhile, the devils are unintentionally preventing the resurrection magic from working, causing the party to have to take a little trip to the fugue plane to stop the devils from their heinous trickery. Another use of the planes very similar to this one is where the PCs must talk to an important NPC who has done them the discourtesy of dying, so they chase his soul down upon Celestia or the Nine Hells.

I’m sure the creative DMs who read this column can make use of the planes in more ways than the handful listed above, but it is just as important for a DM to know when NOT to use the planes. While they are an exotic setting, often these aren’t appropriate for your campaign. In a survival-themed game, you don’t need access to this type of setting. You don’t need planes in a more gritty world system where the gods are unknown or rarely present, where people don’t know what happens after death. Perhaps you want your setting to come into alignment with the other planes only very rarely, and when that happens, the forces of the planes break free and vie for domination, but at other times they are quiescent. The choice is yours, as a DM. I would advocate, however, that when world-building, you look beyond your own world to the planes.

I think that people just take the D&D planes by default and staple them onto new settings by default far too often, and that might not make sense for your setting, or your setting’s pantheon. Remember that the planes must also be homes of the gods in most settings (though not necessarily in yours), and that they should be appropriate for the gods. Also important to note when deciding what to do with the planes is the fact that books containing information on the planes vary GREATLY depending on edition and game. 3rd edition’s astral plane is very different from 4th edition’s astral sea.

If you decide to use source material from books, make sure you pick and choose parts that are consistent with each other. Or don’t. The planes, after all, are strange and chaotic, not necessarily ‘consistent’ in the same way that the material plane should be.

As a final piece of advice, the most important thing to do when introducing other planes to a campaign is to make them different. Don’t just recolor your primary plane, even when it seems to be implied. The Feywild and the Shadowfell (Faerie and the plane of shadow to some) should feel very different to the prime material plane. Strange events should be commonplace, and the landscapes should be fantastic. NPCs should have new languages, and mannerisms that reflect the different environment. Naturally, this should be relatively true of all D&D worlds, but the planes should exemplify these traits. Good luck, and may you find your feet upon another world!

Thanks for reading Eye of the Beholder.