Al-QadimD&D 2eHistory of the Classes 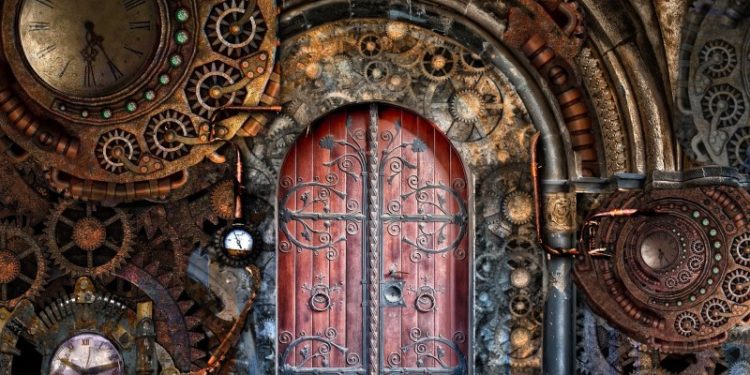 Since UA has just done two back-to-back artificer releases and the Eberron hardcover has been announced, I think it’s a good time for a history of the artificer class. The first “true” artificer class is in the Eberron Campaign Setting of 3.5, but there’s a 2e proto-artificer that I want to touch on as well.

Yep, I came up with another reason to talk about the Complete Sha’ir’s Handbook, which I think is the only splatbook released for Al’Qadim. I’ve talked about the sha’ir before – they got their own History series! – but as I said at the time, the CSH is only so much about sha’ir. The book also offers a wizard kit called the Clockwork Mage.

Which really brings me to the first complicated question around the artificer. What is it? The answer tends to be somewhere in the conceptual space of “magical crafting, and wielding the result,” but that doesn’t tell us much in itself. The Clockwork Mage’s spin on that is fairly self-evident.

Be warned, the rules for using mechanicals (your clockwork creations) are most of 13 pages long. I’m going to do my best to cover this in… uh, less than that.

A mechanical is made of three fundamental parts: the shell, the mechanism, and the spell. The important thing about the shell is its material composition, which grants it AC and HD. This determines its base cost (as a function of AC) for a 2-function, 1-cubic-foot mechanical. You can double the cost to add 2 more functions and 1 foot of cubic volume – and you can keep doing this, if you have the cash to make it work. You also have to have an appropriate NWP for the material you use, or hire someone, and that worker has to pass one skill check for each cubic foot of volume. If you don’t know a lot about 2e skill checks, let’s leave that lesson for another day (like the next episode of the Edition Wars podcast, you lucky devils). The short version is that multiple successes are absolutely not reliable in any sense, but fortunately a failed check costs only a day of work.

Next up is the mechanism, which is (rules-wise at least) composed of functions. Here you can forgo functions to reduce the NWP check difficulty, or add extra functions beyond the ones you’ve bought with the shell’s volume by making a harder check. I think it’s really cool that miniaturization is an option.

There’s a fairly large menu of functions, and many of them have multiple difficulty options for greater power. You’ve got your melee and ranged attacks, various movement modes, lockpicking, improved strength and dexterity, a manipulator hand, and wind-up or steam-powered engines. There’s vast potential here, given staggering amounts of money and improbable levels of skill in Clockwork Creation.

Finally, you create a vessel that is the mechanical’s processor, choosing either a command vessel (smarter, poorer storage capacity for spells, harder skill checks to pass) or a spell storage vessel (the opposite of all of that). Connecting the vessel to the mechanism is one of the big danger points of the whole process – we’re more or less talking “how to hook up a crude brain and nervous system to musculature” stuff here.

Next, you store one or more spells in the vessel, based on the level of the vessel; you can also take a risk (16.6% chance of catastrophic failure) and try to cram extra spells in. To cast spells, you essentially pre-load them into the mechanical. You’re still limited to your normal number of spells per day, but this kit is mostly about downtime anyway, so that’s not a huge problem. The mechanical can cast spells that target itself by your command at a distance, but spells that target anything else (fireball, say) require you to be in physical contact with the mechanical.

You can directly control one mechanical for every five levels you’ve gained, and leave any number of mechanicals to perform repetitive tasks. They aren’t great at this, and can only log and try to process so many commands at a time. The text encourages the DM to play this for humor and aggravation.

Mechanicals gain their THAC0 and saving throw values from their Hit Dice, which are a combination of their material composition, ranging from 1 for pottery to 8 for adamantite, and their functions (+1 HD for every 2 functions). The mechanical rolls saving throws as an object for most kinds of attacks, and as a character to resist spells. (This is your occasional reminder that in 2e, objects had a completely different saving throw table than characters, including the categories of saves.) Mechanicals treat their shells, mechanisms, and vessels as fully separate locations that can receive damage independently.

This is an incredibly punishing kit to try to play. There are some uncommon situations where you can accomplish great things for almost no risk, and commanding a small army of not-very-bright droids sounds unbelievably fun, but your actual PC is extraneous in adventuring situations. You have your skills and not much else, since it’s not like you can cast spells. Wizards are known for their great survivability in 2e, right? Later on in the game, you might have enough wands and staves to make those the core of your spellcasting gameplay.

The system for creating mechanicals is full of fussy detail, encouraging players to push their luck right into a costly or deadly explosion. It’s not a bad approach to making a crafting skill that is dense with choices and varied outcomes; it’s just time-consuming, both in and out of character. In every way, it makes a better NPC than a PC.

All that said, it would be right at home as a technological precursor to Eberron’s elemental-powered vehicles and similar magitech. I wouldn’t use these rules exactly, but an adaptation of this concept would be a great fit for a hundreds-of-years-old Cannith laboratory, or the current cutting edge among a dispossessed nonhuman kingdom (as they try to recreate the power or House Cannith).

As this series develops, I plan to cover the 3.5 artificer, a few prestige classes, the 4e artificer additional artificer, and maybe the PF alchemist or Rich Howard’s 5e alchemist. If you know of variants, predecessors, or the like that I’ve missed, now is a great time to tell me!