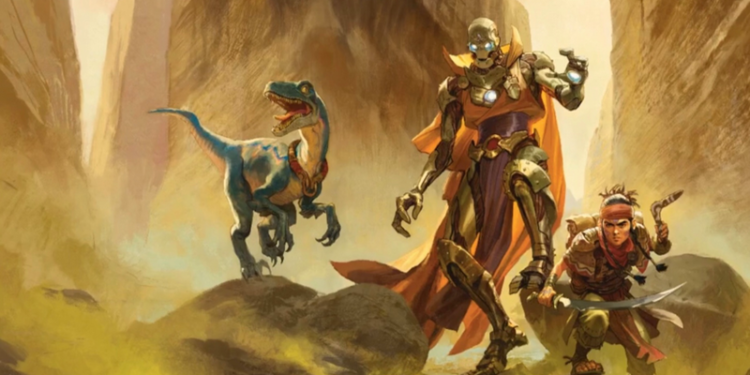 Now that my review copy of Eberron: Rising from the Last War has arrived, I’m starting my breakdown of it by finishing up the History of the Artificer series. As a reminder, this class went through multiple rounds of public playtesting in Unearthed Arcana (v1, v2, v3). I’ll write this on the assumption you haven’t read all of those, but if you want some extra context, they may be interesting.

The concept of this class is industrialized magic, for various specific industries. It draws on mad science characters and concepts, to some degree. The subclasses map fairly well to Big Pharma, Stark Industries, and a puppy farm for purebred (…alloybred) steelhounds. I’m sorry we lost some of the weirder concepts from those UA documents, but I wouldn’t say I’m shocked. If anything, I’m happy that UA bothered to get more experimental and just… see what the surveys said. (But the Onomancer not getting more love from the surveys is still a damn crime.)

The class delivers on several different approaches to support: providing magic items, healing, and reactive bonuses to saves and checks. The main thing that isn’t here is a clear approach to combat. You could lean on attack cantrips, but you don’t get improved cantrip damage or anything else to support that. Instead, your combat style primarily comes from your subclass.

Thematically, doing a bunch of different things with magic items always (i.e., going back to 3.5e) communicates less than it should. It’s hard to anchor five different “good at magic items” features in a narrative, and there’s not a strong enough metaphorical relationship between that and anything better supported in related fantasy fiction. To put that another way, what does any of this mean in the context of a fantasy mad scientist? They don’t attune magic items, they don’t interface with detailed prerequisites to use magic items… it’s not bad, it’s just a stark contrast between the artificer and other classes. Instead, all of the key thematic work happens in the subclasses.

It’s interesting that they declare Alchemy to be the eldest of the artificer traditions, mostly because that poses the question of how artificing got started as a whole practice. I dunno, odds are that Keith Baker has written about that in Eberron at some point.

The gameplay of the Alchemist specialist looks fun, but I’m concerned about their lack of big late-game effects, especially if they’re trying to play as a primary healer. I think they’ll be relying heavily on scrolls of 6th+ level spells, and their magic item creation mechanics just won’t keep that going. Eberron emphasizes ubiquitous low-end magic and rare high-end magic, but I’m not sure that hard-coding that into the artificer and its subclasses serves the player well.

It’s not at all surprising to find an Artillerist specialist in the years immediately following the Last War. There’s been some kind of gun- or technically-not-a-gun-based artificer subclass since the first UA appearance, some of which were much more about turret placement than anything else.

The Artillerist has some of the best sustained damage you’re likely to see for a caster – even competing with the warlock. At 15th level, fire bolt + your two cannons could be kicking out 3d10 + 1d8 + 3d8 + 3d8 if everything hits – so averaging 48 damage. Probably the worst I’d say of it is that it’s a lot of dice rolls, especially if saving throws for those flamethrowers are going on.

Destroying everything you see with magic guns and walking turrets is a strong concept and bound to be popular, especially since you don’t have to deal with ammunition or loading. You can also play it as good steady support, if you’re into City of Heroes’ bubble defenders.

It’s the story of an artificer and their dogbot, which is a lot more common in video games (such as ReCore) or Shadowrun than D&D-related fantasy. The intro text promises a “protector and medic,” but I’m expecting a secondary healer rather than competition with the Alchemist.

I’m not sure this is quite as impressive at the top end as the Artillerist, and I’ve already noted concerns about the Alchemist’s late game. An extra 20d6 “discretionary” damage or healing is great, don’t get me wrong – it’s situationally almost competitive with Lay on Hands. I’m not sure your weapon options keep pace with spending that action to cast an attack cantrip after 11th level, especially if you want to use your Concentration for things other than smite spells. That said, the gameplay is probably fun even when the damage output doesn’t quite keep up, and the tactical benefits of the steel defender are more nuanced than simple damage numbers.

There are 10 artificer infusions, though as with a previous UA, Replicate Magic Item is actually a whole ton of different unique infusions, learned separately.

Boots of the Winding Path are a short-range teleport to someplace you’ve already been this round, for a bonus action. Great for hit-and-run attacks, especially if you started the turn behind cover.

Enhanced Arcane Focus adds +1 (+2 at 10th) to your spell attack rolls with the item, and you ignore half cover. There’s no excuse for not starting with this as an Artillerist.

Enhanced Defense gives a suit of armor or a shield an extra +1 AC (+2 at 10th level). This is a good buy for any artificer, but especially the Battle Smith. (Side note: I assume we’ll see a lot of subclass-specific infusions in future DM’s Guild or official releases. Side note to the side note: I dearly hope that WotC doesn’t forget the artificer in future crunch books.)

Homunculus Servant is functionally an artificer’s find familiar option. You can have both a homunculus and a steel defender, and that’s definitely adorable, but I wouldn’t be able to resist having this Tiny construct in the turret of an Eldritch Cannon. It has most of the same pet rules as a steel defender, but far fewer hit points, lower AC, and deals less damage. This is much more about scouting or delivering touch spells with its Channel Magic feature than adding combat damage.

Radiant Weapon makes a weapon +1 to attack and damage, glowing, and able to blind a creature that you hit. Blinding the creature costs your reaction rather than being free, which seems odd to me. It’s also weird that it regains 1d4 charges daily at dawn… or you could just re-infuse it and have the full 4 charges.

Repeating Shot makes the ranged weapon a +1 weapon, ignores its loading quality, and lets it create its own ammunition if you don’t load the weapon. This is great for ranged Battle Smiths, and not terribly relevant for other artificers – though if you’re outfitting the party, it also makes crossbows or flintlocks good for classes with Extra Attack again, but most PCs won’t build their weapon choices around whether or not you decide to pick up this one infusion.

Replicate Magic Item lets you make a whole list of things, some of which are found later in this book. If you’re looking for more attunement items to fill out your extra slots, there are a lot of attunement items here, so you can just learn this infusion a whole lot. You learn enough infusions that every artificer is picking this at least a couple of times.

Repulsion Shield turns a shield into a +1 shield and gives it 4 charges of 15-foot knockback. Much like the radiant weapon, it regains 1d4 charges at dawn, or you could re-infuse it.

Resistant Armor gives a suit of armor resistance to one non-B/P/S damage type.

Returning Weapon basically does for thrown weapons what repeating shot does for ammunition weapons. +1 to attack and damage, and you can use Extra Attack with it now.

That’s the official 5e artificer for you. I like how it has matured from the initial UA releases. It looks like it would be fun at the table. Just understand going in that you don’t have the incredible, game-changing effects of high-level spells at your disposal, so you’ll need to go wide with your solutions to problems. (Well, probably not the Artillerist.) You do have tons of different ways to address a normal variety of D&D problems, but (for instance) rakshasas are outright immune to artificer spellcasting.

In terms of the evolution of the class, it’s changed wildly from its earliest conceptual roots in gnomish or Zakharan mad science. 3.5 made it entirely about creating and using magic items and metamagic, while 4e focused on weird alchemical, rune inscription, and device-based solutions, with just a few nods to superior use of magic items. The 5e artificer has a lot of structural kinship to the 3.5 version, plus more thematic touchstones in the subclasses. It doesn’t offer the game-breaking scrolls that are the 3.5 artificer’s high-level spellcasting.

More than most classes, I love how 5e’s subclasses carry a playstyle and differ widely from one another. Much like I said of Rich Howard’s alchemist class in Parts Five and Six of this series, the subclasses have a very strong sense of identity, and I’m excited to see people (official and otherwise) imagine more variations in this space.

Finally: it would be unbelievably cool to play an artificer in Descent into Avernus, working as a greasemonkey to maintain your party’s infernal war machine. Or, if the Powers that Be ever bring about a 5e Spelljammer, it would be amazing to play a Kaylee (Firefly) or Ed (Cowboy Bebop) knock-off, maintaining your spelljammer.