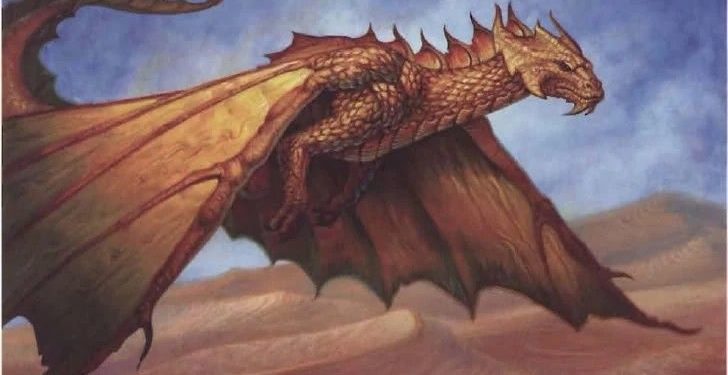 Thumbnail art from Wizards of the Coast

When Agrahztozh the brass dragon came to invade and consider the mountain region of The Serpentine Hills her own territory, the stone giants that lived in caves there didn’t enjoy it very much. The worst of creatures had taken their territory! However, these stone giants being more of the introverted and hermit kind decided to remain in their caverns and ignore the dragon. As far as she didn’t bother them they could share the territory. The trouble began when Agrahztozh created her lair around Jar Banduir (Giant for Drake Killer), the greatsword that used to be wielded by one of  Annam’s champions (Annam being the Giants’ all father). The sword pierces the rocky ground laying as a monument. Thus, the giants decided to get back what rightly belongs to them and kill Agrahztozh in the process. They’ve had enough of that dragon!

Agrahztozh has been exiled from two other mountains in which she tried to lay her territory. The first time she was attacked by a group of human bandits leaving her nearing her death. The second time, it was a group of dwarves that angrily kicked her out. She is tired of not having a place she can consider her home. Now, she found a beautiful place in a mountain region in which a greatsword lays. The spirit of numerous dragons killed by it can telepathically speak with those nearby. Thus, she had finally found a nice place with wonderful company.  You’ll have to kill her to make her leave The Serpentine Hills, because she is not willingly leaving anytime soon!

Of Giants and Dragons

The player characters pass through a battle taking place during their journeys. An adult brass dragon and three stone giants are slashing, throwing rocks and insults, all while a gigantic greatsword is stuck in the middle of the battlefield.

A great bludgeoning sound  resonates to the side of the road, continued by crackling fire breath. To your side, down a ledge in an underground semi covered cavernous location surrounded by mountains, three elongated and singed giants throw boulders at a brass dragon flying in circles over them. However, the most impressive thing among all the skirmishing is the giant blade stuck in the bottom from the underground section past the giants. The 15ft long silvered blade looks wide and great in size, with the face of a sullen giant chiseled in it. The cross-guard shines from its golden finishes, its pummel molded bronze. Without a doubt the true weapon of a warrior.

A DC15 Intelligence (History) or Intelligence (Religion) can identify the face on the greatsword as the one from Annam, the giants’ all father. If the PC knows Giant as a language, they may roll with advantage.

The 3 stone giants are on the lower level, throwing rocks at the dragon. If they detect any PC they will shout at them in Giant, asking for help in exchange for the whole dragon’s corpse upon its death.  The players can convince the stone giants to give the greatsword in return by making two successful DC16 Charisma (Persuasion) skill checks. The first success makes them consider their offer, but it’s the second one that truly does the trick. Failing two consecutive times only angers the giants, making them command the behir to pursue and kill the PCs.

On the northernmost section from the ground floor against the mountains, a roasted humanoid corpse rests eternally on the ground. On its backpack, there’s a 50ft long hempen rope and 3 pitons, as well as 26gp. 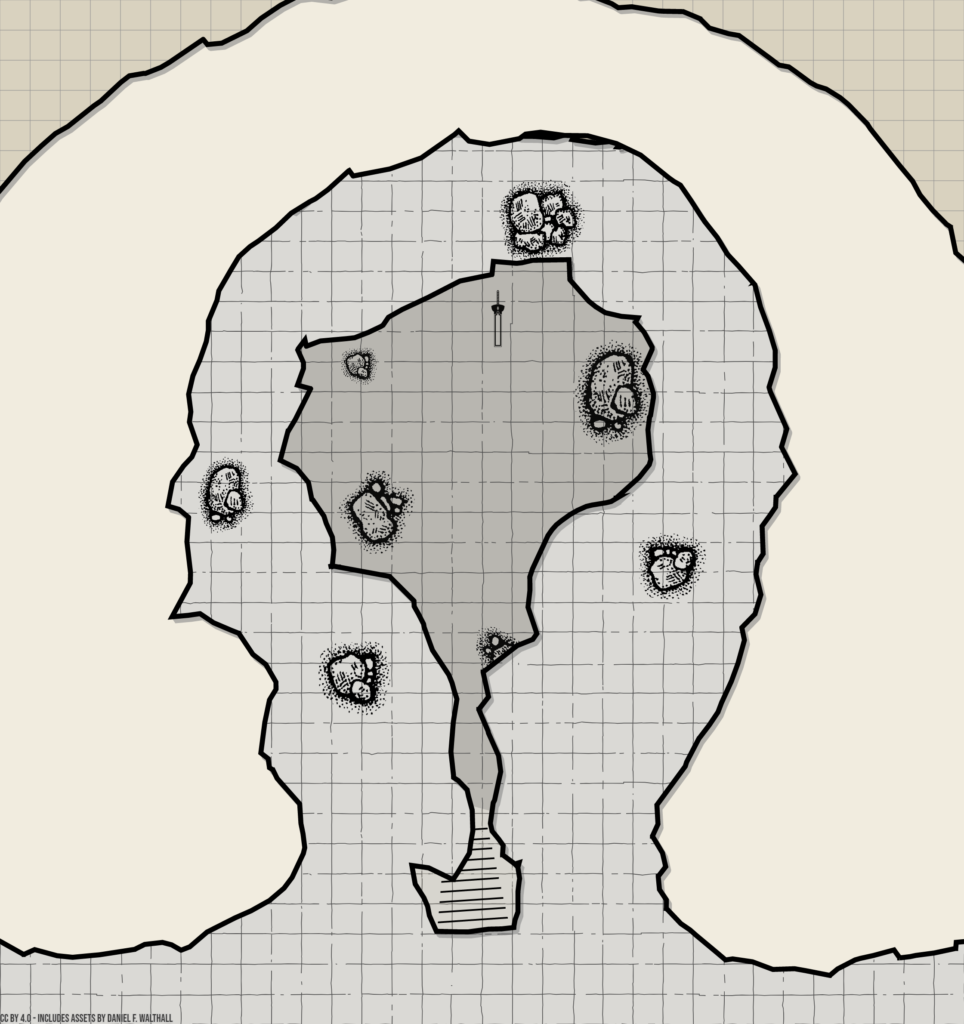 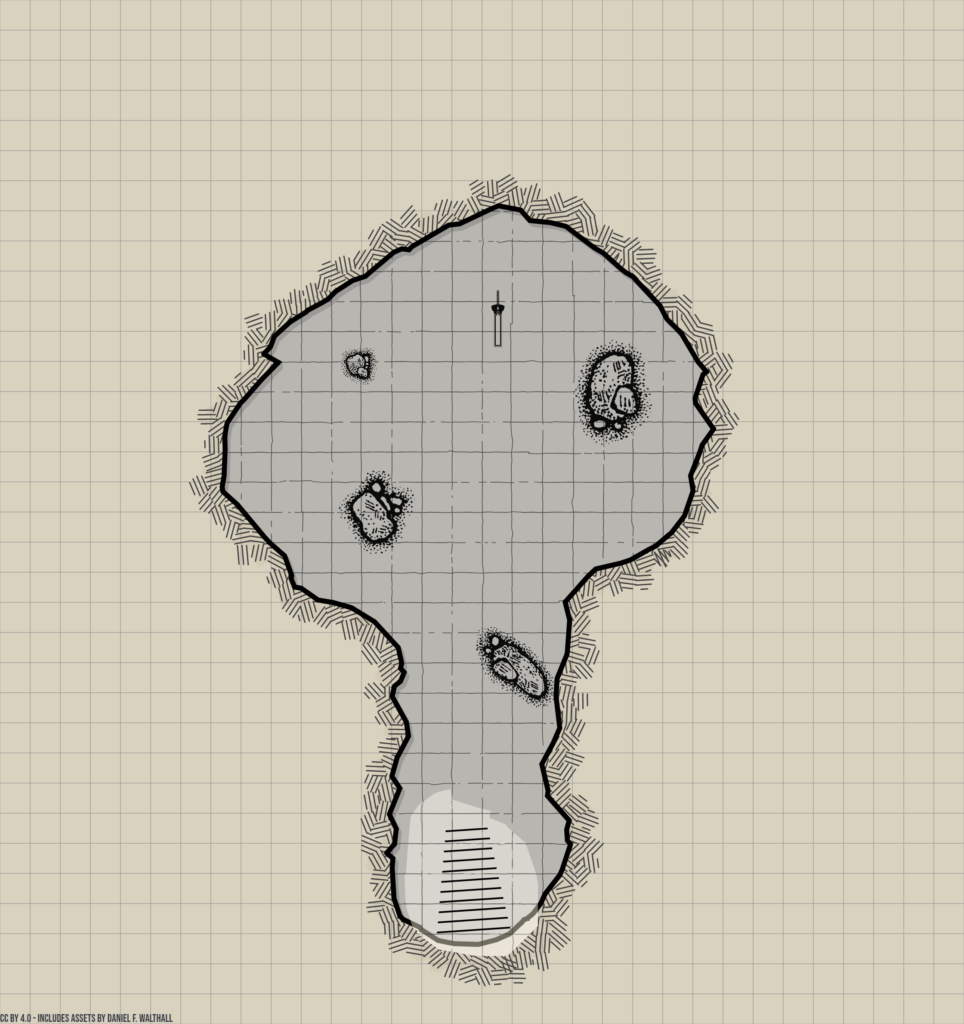 Players may decide to approach one of the four possible solutions for this encounter (or a mix of them):

If the PCs decide to help the stone giants, they will try to protect the PCs at all costs, running in front of them when the brass dragon unleashes her fiery breath, or pushing them behind cover as a reaction. The stone giants are wise enough to understand that the PCs are exactly what they need to kill this dragon, and won’t think twice in sacrificing themselves to protect the PCs as long as one other stone giant remains. They want the dragon dead, even if they have to take their lives to win the battle.

One of the giants may decide at some point to throw one of the player characters towards the flying dragon. They won’t do so without first asking the character. While on top of the dragon, the player needs to make a DC15 Strength (Athletics) check at the start of each of its turns to stay on top of it and not fall.

If the PCs and giants end victorious, the stone giants will fulfill their part of the deal and leave the dragon’s corpse for them to ransack. This can be used to craft armor, potions, and maybe even a shield. If the PCs managed to convince the hill giants to give them the greatsword, they will take turns to put their palms on the sword and sorrowfully say a prayer in Giant before handing it to them. Those who understand Giant can hear them say in their prayers “Worry not Jar Banduir, you are in capable hands”. Upon touch from a PC, the sword shrinks in size to the one from a regular greatsword.

Despite its current bad temper, the adult brass dragon just wants to remain in this territory guarding the greatsword. Even though she does not understand Giant, it’s not easy for her to recognize if the players are not intending to help the stone giants. If so, she will seek help from the PCs, and ask some ranged combatting character to jump on her back. The dragon will be flying in a way to make it easier for the PC to not fall from her. Make that character roll a DC12 Strength (Athletics) skill check at the start of each of its turns to stay on top of it and not fall.

Upon defeating the giants, Agrahztozh apologizes for her behavior and tells them why she is here (paraphrase the Encounter Background section). She then thanks the player characters for helping her out and gifts them a Silent Whistle of Dragon Calling to call her next time they need some help. She can also be convinced to give up Jar Banduir with a successful DC20 Charisma (Persuasion) skill check, but not without leaving her something as valuable as the greatsword in return. Now that she can keep the lair, she wants to become a treasures’ collector.

Wait for one of the parties to die

In order to randomly and quickly determine which of the two sides wins the battle, roll a d6:

To determine their hp after the battle, randomly roll each remaining creature’s hp lowering their hit dice by two and dividing the summed number by two (for example, instead of rolling 11d12+55hp for the stone giants, roll 11d8 + 27), or use the average numbers I already predetermined below:

I recommend either rolling randomly or letting the players do it. This creates tension and puts all the blame on their hands. If you do leave it up to the players to roll, don’t tell them about the summed number you add to the result. This way, they can’t know exactly how many hit points their final foe has left. Once you know the final numbers, narrate a combat scene between the two sides that would make sense. Make sure to make it as cinematic as possible (and remember that rarely D&D combats last longer than 30seconds, so it shouldn’t take too long for it to be over). Will the PCs fight whoever was left from the fight?

Steal the greatsword and run

Possibly the most dangerous of the bunch, as the PCs are risking both parties attacking them. However, this approach can be extremely fun as well! Tilt the balance towards the PCs’ side when you can and let it be an epic escape. A cinematic approach instead of an initiative based one may be the best approach for this. If you want to add some extra tension, roll a Wisdom (Perception) ability check every now and then to see if the enemies get a glimpse of the players. Make them roll with disadvantage as they are in the midst of combat. 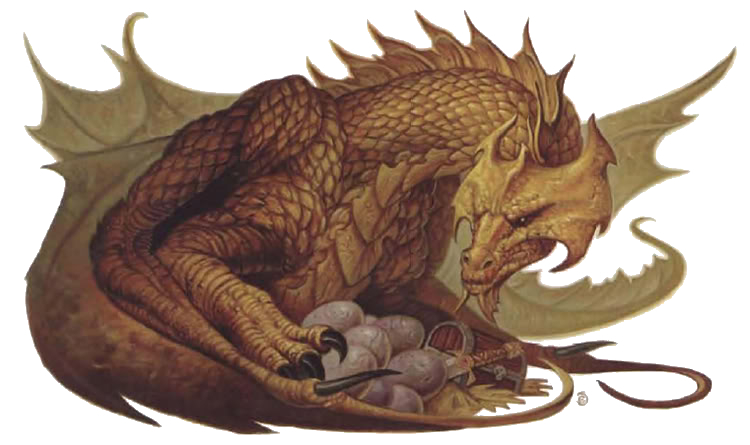 The map was designed to have some verticality, thus creating a more complex combat scene. You should encourage your players to use it in their advantage. However, the enemies may use it in their favor as well. Some examples of how to exploit the environment: