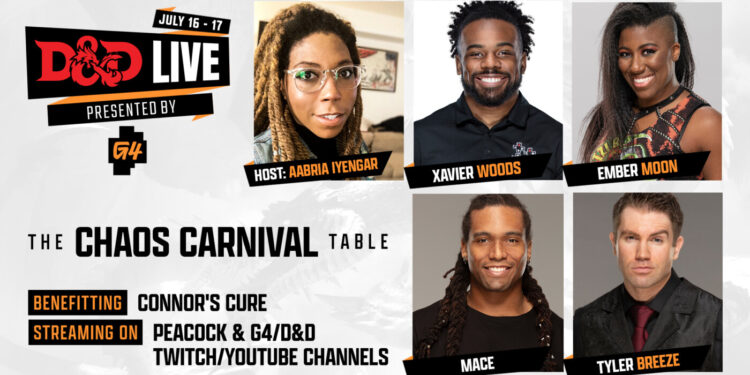 Last week we learned that Jack Black, Kevin Smith, and others would be playing D&D with DM Kate Welch at July’s D&D Live. Today, we just learned that Exandria Unlimited‘s DM Aabria Iyengar is the latest DM to be featured in promos for D&D Live, this time with a table full of WWE Superstars. Here is the press release.

We are less than a month away from D&D Live 2021, a two-day event that will include four gloriously insane tables, pivotal details on upcoming D&D storylines, Magic: The Gathering sets, and super-secret projects. Last week, we announced the Lost Odyssey: Last Light Table that will feature Jack Black, Kevin Smith, Reggie Watts, Lauren Lapkus, Jason Mewes, and host Kate Welch. This week, we’re proud to unveil the players of The Chaos Carnival Table featuring some of the WWE’s most adventurous superstars!

Leading the table on its quest for completion is Dungeon Master Aabria Iyengar, who will help the WWE Superstars navigate the Chaos Carnival.

“It’s no coincidence that the storyline I have prepared for WWE Superstars involves high-flying attractions and wildly dangerous stakes,” said Dungeon Master, Aabira Iyengar. “Each player at the table lost something precious to them at the Chaos Carnival years ago…can they unravel the secrets below the Big Top before they become the next main attraction?”

The players of The Chaos Carnival Table have selected Connor’s Cure as the charity they will be raising money for during the event.

In addition to the multitude of entertainment at D&D Live 2021, fans will receive more information on upcoming products from Wizards of the Coast. Interviews with the lead designers behind the annual D&D storyline The Wild Beyond the Witchlight, the D&D sourcebook set in a Magic: The Gathering plane Strixhaven: A Curriculum of Chaos, and Magic’s Adventures in the Forgotten Realms set using D&D mechanics and monsters. There will be a few surprise announcements as well…

Thank you for reading this missive.

G4 is the next-generation network created for every gamer. Authentic to its legendary roots, G4 returns in 2021 with classic shows and brand-new original content driven by a passion to entertain, unite and inspire gaming’s enthusiastic and diverse communities. Based in Los Angeles and available everywhere gamers congregate, G4 is committed to bringing the industry together through content, commerce, and experiences that set a new standard for gaming innovation, inclusion, and accessibility. Reinvented by Spectacor Gaming, owner and operator of a growing portfolio of gaming and esports assets – including Overwatch League’s Philadelphia Fusion and T1 Entertainment & Sports – G4 is also connected to and inspired by the technology and creativity of Comcast NBCUniversal. Please visit us at http://www.g4tv.com and find us on Twitter, YouTube, Reddit, Twitch, Discord, and Instagram.

About Wizards of the Coast