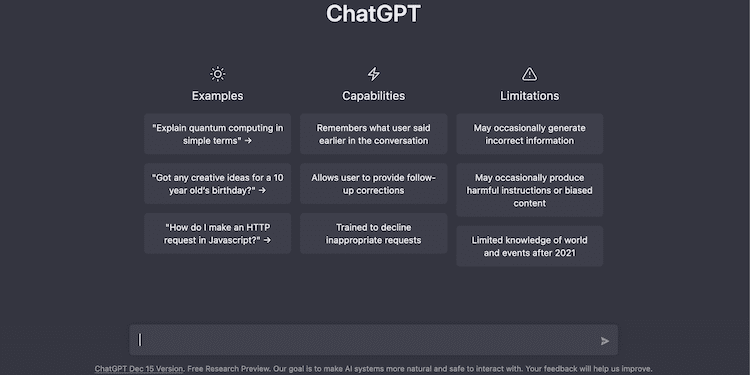 As the New Year begins, I’ve been finding something that is particularly interesting lately: ChatGPT. This chatbot tool has proven useful for me in overcoming creative blocks and generating new ideas. In fact, I’ve been using the ChatGPT OpenAI model for a few weeks now and have found it to be quite helpful. According to OpenAI, ChatGPT is characterized as follows:

We’ve trained a model called ChatGPT which interacts in a conversational way. The dialogue format makes it possible for ChatGPT to answer followup questions, admit its mistakes, challenge incorrect premises, and reject inappropriate requests. ChatGPT is a sibling model to InstructGPT, which is trained to follow an instruction in a prompt and provide a detailed response.

That gives an overall sense of the tool, but the utility comes from making queries of ChatGPT to take an idea and expand on it. I started with the following prompt: “Write the names of 5 interesting NPCs for a fantasy town in a role-playing game setting. Give their name, physical description, work in the town, temperament, backstory, immediate family, religion, wealth, secrets, relationship with other town members, special powers, and a catchphrase.”

and ChatGPT wrote the following:

You can use ChatGPT to gather information about 5 NPCs and their relationships with each other and with other NPCs in the town, such as the Mayor and their spouses and children. You can then use this information to create a more detailed and rich narrative for your town. And if you’re feeling adventurous, you can even try to get ChatGPT to spill some juicy gossip about the Mayor’s affair! When asking ChatGPT for information, you may want to focus on key details such as names, ages, and any notable characteristics or events…or just ask it to tell you a joke. It’s always good to mix in a little bit of levity, even in the midst of all this NPC drama. So let’s ask ChatGPT to “spill some juicy gossip about the Mayor’s affair” and then give me details on the Mayor. And it did:

It seems that the Mayor, James Thompson, has been having an affair with Lady Helene Evergreen, the owner of the town’s theater. The two have been very careful to keep their relationship a secret, but rumors have been circulating for months about their trysts. Some say that they meet in secret at the theater late at night, while others claim that they have a hidden room in the Mayor’s mansion where they can conduct their affairs in private. Whatever the truth may be, it’s clear that the Mayor and Lady Helene are taking great pains to keep their affair a secret, and it remains to be seen how long they will be able to keep it hidden.

Name: Mayor James Thompson
Physical Description: Mayor Thompson is a middle-aged man in his late 40s, with short, graying hair and a clean-shaven face. He is always impeccably dressed in a suit and tie, and exudes an air of confidence and authority.
Work in the Town: Mayor Thompson is the elected leader of the town, and is responsible for overseeing its affairs and making important decisions on behalf of the people.
Temperament: Mayor Thompson is a charming and charismatic man, who is always well-liked by those around him. He is also a bit of a playboy, and has a tendency to cheat on his wife.
Backstory: Mayor Thompson was born into a wealthy and influential family, and has always had a desire for power and prestige. He has worked his way up through the political ranks, and has become a successful and respected leader.
Immediate Family: Mayor Thompson is married to his wife, who is a successful lawyer, and they have two children together.
Religion: Mayor Thompson is a devout follower of the god of justice and law.
Wealth: Mayor Thompson is quite wealthy, thanks to his successful career and his family’s wealth.
Secrets: Mayor Thompson has been having an affair with Lady Helene Evergreen, the owner of the town’s theater, for several months. He is also secretly embezzling money from the town’s funds to fund his lavish lifestyle.
Relationship with Other Town Members: Mayor Thompson is well-respected and liked by the people of the town, and is seen as a strong and competent leader. However, there are those who dislike him due to his tendency to put his own desires above the needs of the town.
Special Powers: Mayor Thompson is a skilled politician and negotiator, and is able to use his charm and charisma to persuade others to see things his way.
Catchphrase: “I always have the best interests of the town at heart.”

Using ChatGPT to gather information about NPCs can lead to engaging and immersive interactions with players in your game. Even if not all of this information is used, the effort put into worldbuilding is not wasted. ChatGPT can be a valuable tool for gamemasters, taking on the task of creating a rich and detailed adventure world. Some example queries you can ask ChatGPT include:

I wanted to get a summary and see if there was anything I might have missed, so I asked ChatGPT the following: “What are some other interesting details that could be added for the 6 NPCs”

While the embezzling Mayor may serve as a minor antagonist in the town, it may be useful to have a more formidable and serious villain for the players to face. The summary shows there are a lot of motives for the NPCs. You can use ChatGPT to generate ideas for this NPC by providing the prompt: ‘Create an evil NPC in the town that is hiding their identity.‘ This could lead to a more complex and engaging storyline for your game.

Although ChatGPT does have its limitations, it can still be a useful tool for coming up with new ideas and finding inspiration when you’re struggling to come up with something creative. By using clear and specific prompts, you can maximize the utility of ChatGPT in your role-playing game. I went with the most interesting NPCs, but you can use ChatGPT to fill the town with common folks. We hope you found these tips helpful and that you’re able to use them to enhance your games. If you have any thoughts or experiences to share, please leave a comment below.