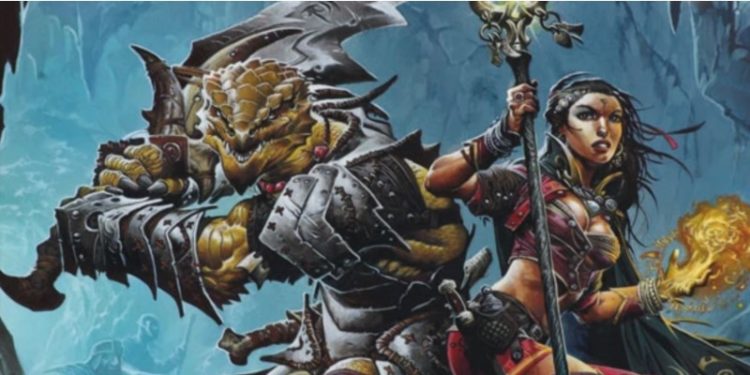 I’ve been looking forward to this entry in the History of the Fighter since I started the series. I played more fighters in 4e (er, two) than any other class, and I absolutely loved the two playstyles. The first was a dragonborn sword-and-board fighter, and the second a brawler with longsword and open hand. I’m going to talk about these, but mainly I want to say that the pure gameplay loop for these was just goddamn amazing. The brawler is the only gameplay that ever beat out the predator druid for me. In fairness, though, I’ve described about half the PCs I played in all of 4e in this paragraph.

I’m guessing that a lot of my readers already know this, but the fighter is the martial defender in 4e. Class roles are a huge part of 4e’s combat design, in a more concrete way than most other editions. Fighters in 3.x-and-prior defend party members because they had the best AC and the most hit points. In principle, they kick out enough damage that enemies can’t ignore them. In practice, that broke down badly in 3.5e unless you’re using a two-hander and gaming Power Attack pretty hard. This is a big part of why fighters drop off the CharOp map so hard, in 2005-ish. Oh, sure, there are improvements to attacks of opportunity, but it’s not the same as having focused mechanics.

As is true of all martial classes, the powers themselves kind of run together, level over level, though that’s more because of their flavor text than their actual effects. There are only so many ways to say “you stab, slash, or bash ‘em up super good.” Once you drill down, there’s good variety going on, probably better than the ranger offers. As usual, I’m not doing individual power breakdowns, but it’s got everything in common with the less-magical Book of Nine Swords disciplines. The class lacks a strong core story here, because it’s trying to support a lot of different mechanical and thematic ideas under one roof.

In addition to more powers and feats, Martial Power (er, Volume One) brings us two new builds and their core features. The Battlerager fighter is sort of covering for the absence of the barbarian, and (once the barbarian comes along) for a defender variant. The Tempest fighter lets you play a two-weapon-fighting defender. Both of these wear light armor or chainmail.

Tempest Technique grants a bonus to attack rolls, AC, and damage rolls if you’re fighting with two weapons that have the off-hand property and wearing light or chainmail armor. You’re taking a damage and AC hit to get an attack, AC, and damage bonus. There might be a net gain in damage, and there’s definitely an improvement in ACP. You’re really here for the powers that it opens up for you.

The Invigorating keyword shows up in some powers, and in some cases it’s the one thing that sets that power apart. Benefiting from this requires Endurance skill training, which is almost redundant since you need a good Con to get anything out of Invigorating powers.

The Rattling keyword lets you put a little fear into your enemies. It requires Intimidate skill training, and its benefit is a lot like doubling the attack penalty of a mark when you deal damage with one of these keyword powers. Unless I’m missing something, there aren’t any Rattling keyword powers in the new general-access fighter powers. There are two that have it in one of the new Paragon Paths. So, um, don’t get attached to this keyword unless you want to multiclass with rogue, which has plenty of Rattling options. It’s an incredibly misleading presentation.

The new fighter powers of this book do a lot of different things, of course, but longer-term marks and self-healing are significant throughlines. The trend of the powers all running together in name and flavor text continues unabated. Overall, Martial Power doesn’t change much in the fighter’s concept – in all but the most specific details, it’s more of the same.

This book brings us two new feature options, intended to go together to form the Brawling fighter build. I am scarcely able to describe how enjoyable I found the Brawling build, in a game Colin ran. I think it delivers on the promise of feeling like my strong character is strong like no other game element I have seen before or since.

Brawler Style wants you to fight with a weapon in one hand in a spiked gauntlet or nothing in the other. Right out the gate, this is not a style you see genuinely supported for fighters… ever. The closest I’ve seen thus far in the History of the Fighter series goes back to 2e’s Complete Fighter’s Handbook, where your empty hand gives you a bonus to AC… oh God, it’s just a Shield That Isn’t There. Anyway, this feature pays you with +1 to AC and +2 to Fortitude; that Fort bonus is specifically about making you better at resisting grappling, but it makes you better at resisting other things as well. This replaces Fighter Weapon Talent. Since you’ll have a lower AC and damage output than other fighters, this build is actually dabbling in the controller party role, including tons of forced movement.

Further, you gain a scaling bonus to unarmed attacks and grab attacks. This is important because you’re not otherwise gaining the proficiency bonus or magic bonus of a weapon, so the defenses you’re targeting would otherwise scale out of reach. There’s some detailed handling around the spiked gauntlet, as well.

As a (filthy casual) fan of 7th Sea and the historical martial arts style that uses a heavy glove or gauntlet in the off-hand to deflect and trap weapons, I’m just so excited to see this. Though we couldn’t support weapon trapping for obvious safety reasons, Colin and I made a point of including armored gauntlets as a viable form of “buckler” when we wrote the Dust to Dust LARP, having already seen them work well in Eclipse LARP, our sister campaign.

Combat Agility is an alternative to Combat Superiority. Instead of you stopping your opponent when they move, you chase them down and knock them down. The problem is that they get to move however much they were going to move, while you only follow them a number of squares equal to your Dex modifier. So, you know, probably not 6 until quite late in the game. I’ve always felt like I was missing something in how this feature is supposed to work, even after reading the sidebar intended to clarify that. When this works it is super good, but I don’t think it delivers on its core promise. For whatever reason, it also doesn’t get any help at all from feats in this book, while tons of feats key off of Brawler Style. So give this one a miss.

The powers keep up the trends of the Player’s Handbook and Martial Power, with further support for the new builds of Martial Power. The new Paragon Paths are stylish, but there’s a surprising lack of support for Brawlers there. I’d like to see the Glorious Myrmidon and Steel Vanguard Master get updated, directly or indirectly, into 5e subclasses. I mean, you can kind of support them now, but I’d be curious to see what an unrepentant glory hound might look like as the mechanical centerpiece.

A later chapter introduces Combat Styles, which are feats that pay you a little for getting the right list of encounter powers. They’re only for martial characters, and they try to pull your attack powers together into a theme and identity. On one hand, cool; on the other hand, a lot of your power choices from that point forward are made all at once. In terms of getting you to think of your character as a member of a warrior order and feel a kinship or rivalry with other martial characters, it’s got some interesting things to offer. (Here’s me trying to do something similar for the 5e Battlemaster.)

That’s basically it for fighters in the “original” 4e – defenders with a varying amount of self-healing, creating opportunities for allies, damage output, debuffing enemies, and forced movement. As I would say for all of 4e, the mechanics start strong but soon become mind-numbingly fiddly – there is just too much data to track and resolve at the table. The gameplay loop is incredible, and you can do… possibly more than any other character to disrupt your enemies’ tactical plan.

The super short version of “what is 4e Essentials?” might be something like, “4e’s presentation was too dissimilar to other editions of D&D for many users. Essentials is a return to form in some gameplay and stylistic elements, while maintaining the clarity of information presentation that is 4e’s hallmark.” By the time Essentials came out, we had ended our 4e game due to the Diaspora of 2010-’11, which won’t mean anything to you if you didn’t work for Icarus Studios and the Company That Shall Not Be Named or Remembered in those years. Anyway.

Heroes of the Fallen Lands offers the Knight and the Slayer as its two fighter builds. The former is a defender, the latter a striker; most classes have two different role options in 4e Essentials. Fighter gameplay is much more about stances modifying melee basic attacks than about using unique attack powers. As you advance, you gain new features other than attack and utility powers, so in that regard it looks much more like other editions of D&D.

Hit points, healing surges, and weapon and armor proficiencies don’t change from the base 4e fighter, except that Knights pick up plate proficiency. The Knight and Slayer have slightly different skill options, but no big surprises. As for the rest of the features, here’s the Knight:

After 10th, you move on into the Stalwart Knight paragon path and the Epic Knight epic destiny. I’m not covering them in detail, because I think you’ve got the gist of it: defensive fighter is defensive, with some leader-like options. This is substantially similar to XGTE’s Cavalier subclass, and aims to say most of the same things about the fighter.

Moving on to the Slayer:

I have very mixed feelings about 4e Essentials. On one hand, the gameplay loop that I love so much in the 4e fighter is dead as a post. This approach to play is neither simple enough to be obvious to a new player (because no game designer ever understands just how daunting games are to new players), nor rich enough for those that already liked 4e. It doesn’t even escape being 4e, for people who had already decided this wasn’t their deal.

On the other hand, the 4e Essentials fighter is, hands down, the clearest class story the fighter has gotten thus far in this series. The utility powers do a ton of heavy lifting, and there aren’t a lot of samey attack powers watering down theme. To my mind, this is exactly the right level of tabula rasa to get new players thinking creatively. Knights are heavily-armored, defensive fighters; Slayers are high-risk, high-reward asskickers. Unless 13th Age or Dungeon World brings a scorchingly good story, it’s not even getting competition, because no matter how much I love 5e’s first three fighter subclasses, they’re at-best-middling on story.