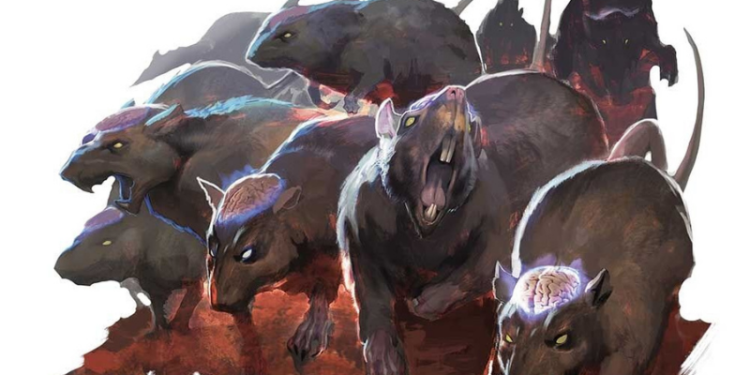 The Beast class of monster is hugely varied from the common Frog to the monstrous Tyrannosaurus Rex. Beasts do cap out at a fairly low CR, with the highest ones being the Huge Giant Crab, the Sperm Whale and the T-Rex. Still, these creatures can make really wonderful monsters of the week and surprising big bads. Let’s get wild! (that’ll be the last pun I promise)

You can check out previous articles in this series where I cover: Elementals Constructs Aberrations

Beasts as Monsters of the Week

No beast on its own is going to be much of a challenge, but a pack of wolves can easily present a threat to a low level group. You should also consider that wolves are likely encountered far from civilization and may attack at night when the party is least prepared for them. You can use creatures like the wolf to harry the party and force them to continue to use resources with little rest in between.

The giant toad is a horrifying creature, capable of swallowing a humanoid whole. Throw a few of these at your heroes, going after the juicy wizard or cleric and you can easily throw the party into disarray. All those disappearances down by the swamp might be because there are a bunch of giant toads waiting to gobble up any wayward travelers.

A Giant Ape is the King Kong of the D&D world. These huge beasts can fling rocks and punch, but what makes them really formidable is their 7 intelligence. While much lower than an average humanoid, this does give them a level of cleverness that you can incorporate into their tactics. A troop of these apes can set primitive traps for the party, or perhaps distract the party while some sneak in to gather up all the bananas (or gold) from a town. Ape out!

The literal best monsters because these are monsters whose bones you can look at and whose teeth you can hold. That, and they’re hugely varied. From the T-Rex to the classic Stegosaurus, you have a lot of options for monsters if you want to incorporate them into your game. If you’re struggling figuring out how to incorporate dinosaurs into your campaign, consider perhaps a portal opened by your villain to primeval earth, or a cave discovered that leads to a hollow earth.

Okay, hear me out. This is one of the best villains you could put into a campaign. The Swarm of Cranium Rats is a collection of psychic rats that have been uplifted by Mindflayers. What happens to the rats when the Elder Brain has been killed and the Mindflayers beat back? What if they decide to take power themselves?

A campaign where the heroes must fight against a mysterious villain that is slowly consolidating power in a region only to discover that it is a swarm of hyper-intelligent rats! That sounds awesome! Rats are so commonplace that they are easily ignored.

Because the Swarm of Cranium Rats is a CR 5 creature, you might think that the rats might not be very challenging for a higher tier of characters, but they possess a number of innate spells that can be used to justify having a small army of mind-controlled monsters. You could even use the stats for an Elder Brain and describe it as an enormous swarm of rats. You can up the stakes by revealing that even if one Cranium Rat escapes, it has the potential to create a new swarm.

I hope today’s article gave you some ideas of how to use beasts in your campaign’s encounters! Next week we’ll take a heavenly look at Celestials.

Art by Wizards of the Coast