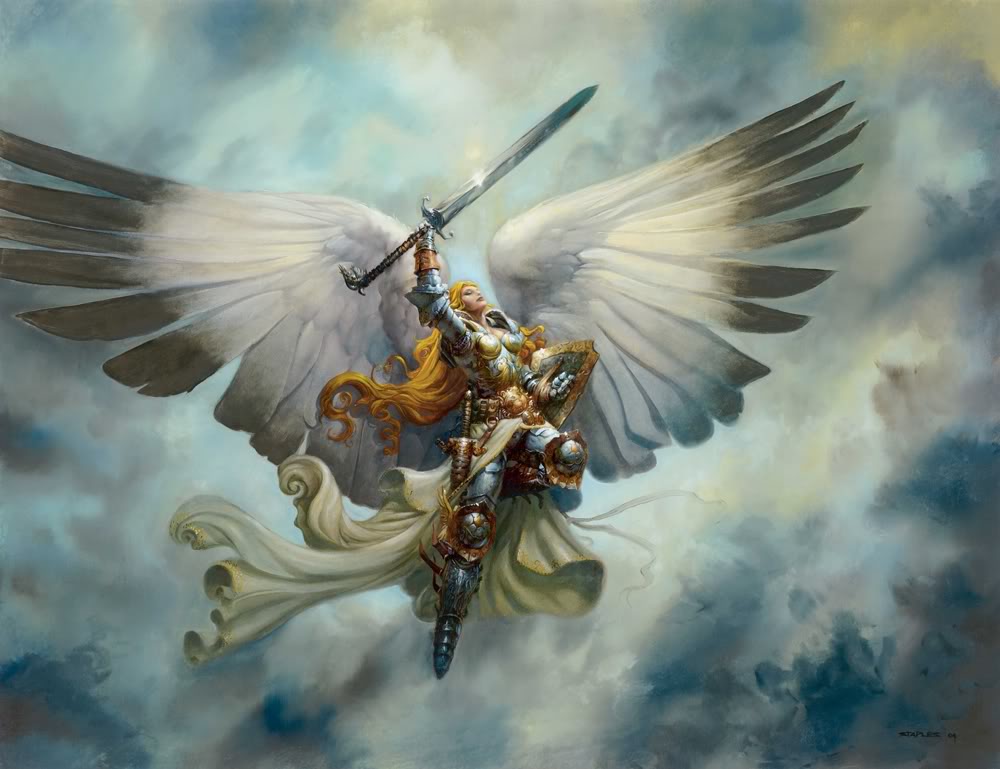 This week we turn our gaze heavenward, exploring how divine messengers can serve as our main villain or as a monster of the week for a campaign. While all celestials are good-aligned, that doesn’t mean they won’t come into conflict with a generally good-aligned party.

I see Celestials (and Fiends for that matter) as something akin to a force of nature. They are unyielding in their enforcement of good and sometimes law. This can be harmful when their rigid dictates of goodness encounter the shades of grey reality that mortal creatures live in the Material Plane.

You can check out previous articles in this series where I cover: Elementals, Constructs, Aberrations, and Beasts.

Celestials as Monsters of the Week

The Couatl is one of my favorite celestials. I love snakes in my fantasy and a flying snake inspired by Mesoamerican mythology is just *mwah* Chef’s kiss!

Because it has a fairly low CR, it can appear in most campaigns. Its abilities lend it more as an operator behind the scenes than a big ol monster to fight. They can change shape to humanoids or beasts and are motivated to protect or accomplish some task. A couatl passing its mission onto the party with its dying breath is an awesome way to kick off a major quest.

The fantasy classic, and the aspiring dream of many a horse, the Unicorn comes with its own lair effects. A classic quest involving a unicorn could be hunting one for its horn or hair which are needed to lift a spell or end a plague. It could even be a whole side quest to find a unicorn for the paladin to take as their mount.

Unicorns also are formidable to fight, especially when paired with some fey creatures or beasts. Their hoof and horn attacks are hard-hitting and they have a ton of healing to sustain themselves and their allies. They also have legendary actions that can help prevent a strong party from just one-shotting them.

Devas are the lowest level of angels that the basic rules offer. These messengers from the heavens are formidable warriors, capable of inflicting a ton of damage with their magic radiant-damage-dealing mace. They also have magic resistance and can change shape at will to any humanoid or beast.

Like a couatl, a deva can be used to guide the party or to challenge them and their commitment to the path of righteousness. A deva might call upon the party for help. Perhaps one has been stuck as a frog due to the meddling of a local hag coven and directs and aids the party to destroy them.

Planetars sound like even worse plantar worts, but they’re actually strong angelic beings capable of detecting lies and seeing through any magical disguise or invisibility. Planetars are weapons of the gods, sent to enforce their will. A planetar may be an enemy or ally and could be sent to punish a community as much as to protect it.

The party could be stuck in between the planetar’s rigid judgment and the peasants who accidentally summoned a fiend when their prayers to their god went unheeded. They could also appear as a portent that a fiend will soon ravage the countryside.

Solars are the beefy elder brothers of the angels, with a high CR, a bow that can insta-kill, and 3 legendary actions per round. These heavenly juggernauts can command vast armies of devas, or direct an ongoing campaign against a fiend incursion.

Solars can be uncompromising in their commitment to the lawful enforcement of their god’s will. The party need not be evil to come into conflict with them. Solar could potentially see mortals as expendable or as a resource to exploit. Better that they are killed by an angel and their souls freed to the afterlife than their souls captured and used to fuel demonic war machines.

A Solar could even be sent to test a high-level party’s skill and mettle before the god instructs them to fight an even stronger evil force. Whatever the reason, waging war against one of heaven’s strongest warriors would make a memorable campaign.

Next week, we’ll look at Fey!

If you missed previous articles in this series, check ’em out here: Elementals, Constructs, Aberrations, and Beasts.

Art credit from Magic the Gathering