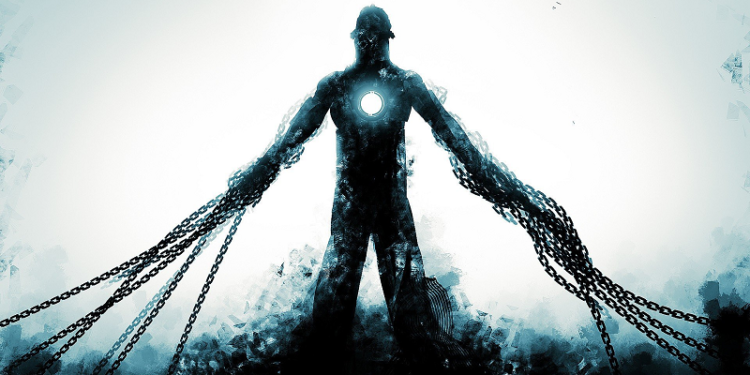 Back when I was first thinking of a world where the Zodiac was battling the Far Realm, one of the very first images I saw was a massive chain cut from the night sky. This chain binds the Gate of Vek Ntshai – the first invasion point of the Far Realm. At great personal cost to herself, Auris the Binder created a chain to close the gate. Even with her sacrifice, the gate and chain would remain vulnerable without the vigilance of those who swear to protect it. With all this in mind, let’s look at Sacrificial Power and the Oath of Binding.

Previous Discussions: The Zodiac and the Celestial Sorcerer | Aberrations and the Circle of the Zodiac Druids | Dendar the Night Serpent and the Path of Nightmares Barbarians | Living Stars, Blazozoids, and Zodiac Patron Warlocks | Singing Stars, Erinyes, and the Bardic College of Kindly Song| Bitheism, Clerics, and the Service Domain | Superstition and the Starscarred Fighter | Warrior Orders and the Way of the Jade Serpent

The Nature of Sacrifice

I have a friend who believes you can’t achieve anything of substantial value in a roleplaying game without sacrifice. It’s lucky, then, that sacrifice has a lot of meanings. Are we talking about someone laying down their life for someone or something else? Do we mean a sacrifice – perhaps the choicest bit of cooked meat or a prized calf – to the gods or another, similar being of power? Maybe it’s just the nature of taking a series of losses when it matters most? For him, the answer to all of these questions is a resounding “yes.”  This might seem trite or trope-tastic to some, but here’s the thing – it’s not really about the sacrifice.

In my opinion, immersion in a game more quickly and naturally takes shape when you encounter scenarios that don’t break in your favor. When characters win all the time, it’s all too easy for them to fall into playing versions of themselves with super powers. Now, there is absolutely nothing wrong with that if it is how you have fun, but it can be at odds with some stated table goals. I know what everyone will say to this, “Listen here, idiot. My group wins a lot and we are awesome roleplayers!” First, I can’t believe you called me an idiot. Second, I never said you couldn’t be a dope-ass role-player if you come out on top a lot. All I said is that I believe it is easier and more natural for people to identify with and buy-into their characters when they are faced with strife.

When my friend says, “sacrifice,” what he means is, “I want players to become quickly invested, and to make difficult choices.” Sure, sometimes that’s the sacrifice of a character at a critical moment. However, sometimes it’s sacrificing your moral high ground and choosing to promote the agenda of the lesser of two evils. As long as it’s in service to the story at the table, it’s good for the players – if not the characters.

It’s safe to say that sacrifice is a major theme in the world of the Zodiac and the Far Realm. Nothing comes easy. The forces of the world constantly struggle under the threats – both mental and physical – caused by their proximity to the Far Realm. Not every conflict results in a victory for the inhabitants of the world. Those in power cut deals in the name of protecting their people – forming alliances that are questionable at best. Even then, some victories are in name only. Everyone gives something up in order to survive in this world. It’s just a matter of scale. One of the most memorable sacrifices in this world is that of Auris the Binder – one of the Zodiac guarding the world.

Legend tells of a time long ago when the new people of the world found themselves face to face with the denizens of the Far Realm for the first time. Those who heard the cajoling whispers and promises of the aberrations built a towering gate of jacinth in the Wandering Marsh. As the gate neared completion, people across the land began to hear the Song of the Silent Prince. They came to the marsh in droves – ignoring everything save their destination and the wordless song they sang. They sang until the surrounding land sang with them. The salt from the marsh rose from the water and clung to the gate as the gathered horde sang. Salt crystals shattered and  bled a color that no one had ever seen. The gate cracked open. Vek Ntshai – the Silent Prince – gazed upon the world for the first time.

It was then Auris intervened, as she knew she must. She sought out Izkov to assist in binding the gate before the Silent Prince could pass through. In order to do so, Auris gave the smith a portion of herself – forever diminishing her presence in the night sky. From her essence, Izkov forged a great chain and sent it hurtling toward the ground. Upon impact, the whispers ceased. Through the chain, Auris spoke to those present – imploring them to close the gate and bind it with her gift. Without his song to aid him, the Silent Prince was forced to exert more direct control on those within his sight – causing the first of the Quiet to take form. Luckily, many of those present belonged to warrior orders and had seen battle in the past. They held together the confused and panicking crowd, rallying them to assist in wrapping the chain around the gate.

Though the salt marshes were stained crimson with the blood of those who gave their lives – and the Quiet withdrew in the ensuing confusion – the gate was closed. The Silent Prince remained outside the world, biding his time.

The Oath of Binding is a promise to guard what must be guarded and to seal away that which must be sealed away. Often called chain knights, salt knights, or bound knights, paladins who take this oath devote themselves to pursuing creatures and objects that pose a danger to the world. They believe some things are too dangerous to exist, and are better off locked away and guarded – destruction often leading to equally dangerous circumstances. These paladins hold their oaths above all else, acting for the betterment of the world. This can often place them at odds with the local laws. As a result, most of those who swear this oath are skilled at negotiation and often carry contracts with them, binding them to rulers or law enforcement in exchange for the right to proceed with their duties. These chain knights do not wish to cause strife when it can be avoided, but their duty always comes first.

Before a paladin takes the Oath of Binding, they must first copy out these tenets in iron ink and place their thumb into a drop of their own blood upon the page. These tenets place duty and the stewardship of the world above all else. These tenets might vary from order to order, but the core beliefs remain intact.

Iron Arms. It is my duty to shelter and protect the world from outside forces. I give whatever I can spare to those in need.
Iron Guard. I will lock away harmful creatures and objects, ensuring they are guarded by myself or others like me in order to stop harm from recurring.
Iron Heart. I will not stop or be swayed from my path once I have chosen to walk it.
Iron Word. Once a promise is made, I will never break it.
Iron Will. I will make the difficult choices needed to keep the world safe – even at great personal cost.

You gain oath spells at the paladin levels listed.

When you take this oath at 3rd level, you gain the following two Channel Divinity options.

Chains of the Binder. As a bonus action, you launch icy spectral chains towards a creature within 30 feet of you that you can see. The creature must succeed on a Strength or Dexterity saving throw (its choice) or become tethered to you by the chain. While tethered, the creature’s base walking speed becomes 30 feet if it is greater than 30 feet, may not take the Dash action, benefit from any Movement speed increases, or use any method of extradimensional Movement, including teleportation or travel to a different plane of existence. The creature is not prevented from passing-through an interdimensional portal. While bound by the chain, the creature repeats the saving throw at the end of each of its turns. On a success, it frees itself and the chains vanish.

Turn the Nightmare. You can use your Channel Divinity to utter powerful words that cause pain and terror for aberrations and monstrosities. As an action, you present your holy symbol and each aberration and monstrosity that can see or hear you within 30 feet of you must make a Wisdom saving throw. If the creature fails its saving throw, it is turned for 1 minute or until it takes damage.

A turned creature must spend its turns trying to move as far away from you as it can, and it can’t willingly move to a space within 30 feet of you. It also can’t take reactions. For its action, it can use only the Dash action or try to escape from an effect that prevents it from moving. If there’s nowhere to move, the creature can use the Dodge action.

If the creature’s true form is concealed by an illusion, shapeshifting, or other effect, that form is revealed while it is turned.

Starting at 7th level, you emanate a 10-foot aura that can bind you to friend or foe. Whenever you take damage, you may spend your reaction to force a creature within your aura to succeed on a Wisdom saving throw or suffer half of the damage you receive (rounded down). The amount of damage you receive is not reduced.

At 18th level, the radius of this aura increases to 30 feet.

If a party is forced to sign the contract, the geas does not take effect. You may only have one contract that you create active at a time. You know when a contract is destroyed or violated.

Guardian of the Vault

At 20th level, you can assume the form of a powerful guardian, taking on an appearance you choose. For example, your skin might become iron or take on a stone-like texture, your hair might become sharp and spiky, or you might be wreathed in icy armor. Using your action, you undergo a transformation. For 1 minute, you gain the following benefits: