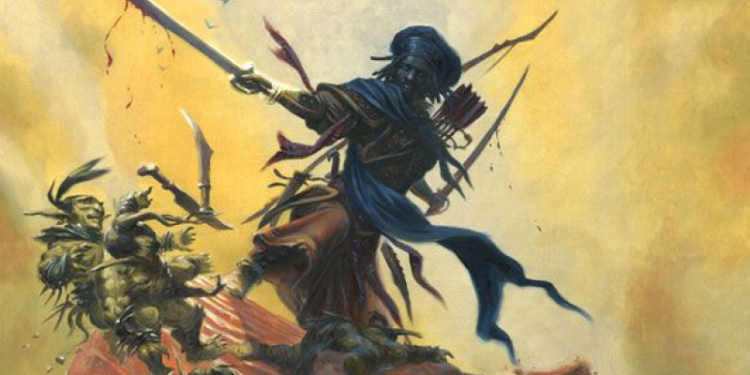 As we come to the end (for now, the future is unwritten) of the History of the Fighter, it’s been an interesting run. I’ll get into what I see as the arc of the fighter’s development over the last forty-four years at the end of this article. For now, 5e waits – and the fighter is one of my favorite classes in this edition. Sure, I said the same about 4e fighters, and I meant it then too. In addition to the Player’s Handbook class and subclasses, I’ll also cover the Purple Dragon Knight from SCAG; look here for the XGTE subclasses.

The two pieces of art in the fighter’s class entry (pp. 70 and 73) are some of my favorite in the whole book. The first is one of the best character looks in the whole book, and the second evokes Beowulf wonderfully. I’m not here to be an art critic, but the art is a little part of how the class first got a death-grip on my imagination in 5e. (That, and finding their development over the course of D&D Next pretty compelling.)

That’s the core of the class. Self-sufficiency, resilience, and rapid displays of extreme violence are the core of class, and easily transfer to any style of fighter, whether we’re talking about a chivalric knight, street brawler, sniper, or… well, you get the picture. I think it would be quite a stretch to say that these class features tell any significant amount of story. I’ve said any number of times that the Champion and Battle Master are playstyles rather than themes too.

The Champion Martial Archetype is for people who don’t want more involved decision-making in their gameplay. Of the fighters in my own campaign, there have been roughly an even split of Champions and Battle Masters.

So damage output, an advantage in physical challenges, the spread of possibilities of another Fighting Style, more damage output, and one of the best pure survivability features in the game. I feel like this style might have been called “Survivor” in a D&D Next draft? That’s still a pretty good name for it. “Crit Machine” is also on point, but lacks a certain je ne sais quoi.

There’s nothing wrong with the gameplay here, but you need to bring your own story. I’ve had plenty of debates around whether “the book only provides mechanics, the player brings all of the story” is a good model. My position is that I want classes and subclasses to have some measure of suggested – but not obligatory – story, but there’s still room to reinterpret that to support other concepts.

One last thing – three fighter levels to get to Improved Critical is also a popular and excellent multiclass choice. Action Surge and Improved Crit go well with any weapon-wielding class. I can’t really say the same for Battle Masters or Eldritch Knights.

This is the Martial Archetype for fighters that want more involved tactical gameplay, with special attacks that deal both extra damage and effects. This is the gameplay I’m looking for, except for when I want to play an Eldritch Knight. Carefully choosing maneuvers can get you to a warlord-adjacent gameplay space, too.

So about the maneuvers:

Overall, I love what goes on here. Maneuvers are fun stuff and bring the right level of tactical combat to the Battle Master. I hear that archer Battle Masters are just hell on wheels, which is easy to believe. I love the support for tanks, warlords, and skirmishers all within this one subclass. It’s still light on telling one clear story, but there’s explicit support for a lot of different stories. If you’re looking for an unbiased view here, well, sorry folks.

I still want to write a whole history series on fighter-mages. It’s another concept that I’ve always liked, but seldom played. The fundamental challenge of the playstyle is that you’re good at two things that you can’t do at the same time, so you’re often choosing just the fighter side, or just the mage side. The subclass’s features beyond the core of spellcasting try to smooth that out, though.

I love what goes on here, and I’ve enjoyed the first several levels of playing an Eldritch Knight. There are some problems – the action economy is overtaxed if you want to combine this with TWF or any number of feat options. I don’t like what Mearls has said about wanting to get rid of bonus actions, but I do think there’s some minor issues that crop up with too much dependence on them. Not enough to ruin the subclass, but enough that you need to approach your character building with a subtler understanding.

It’s worth noting that utility spells, especially if you pick up Ritual Caster, give the Eldritch Knight a greater variety of ways to engage with exploration and social interaction scenes than other Martial Archetypes. (My Eldritch Knight sometimes spends most of his spell slots casting comprehend languages as we wander the planes.) We see 7th level as a consistent place to put social, exploration, or investigation features, but the Eldritch Knight works quite a bit differently. Admittedly, the XGTE Martial Archetypes don’t stick to that trend quite as firmly.

In the Sword Coast Adventurer’s Guide, there’s a Martial Archetype that is either the Purple Dragon Knight (if used by a Cormyrean) or a Banneret (if used anywhere else). Personally, I default to the latter name, as it suggests the subclass’s more warlord-oriented theme. If you’re not familiar with knight bannerets, well, Wikipedia is here for you.

From what I’m hearing online, the Banneret doesn’t get a lot of respect. I think it’s all right, could maybe use some of the extra movement benefits that we see in Maneuvering Strike. Rallying Cry doesn’t seem great at first, but maybe it helps to think of it as being a twinned healing word that you cast with a bonus action you were using anyway? I think there could have been just a little bit more here without breaking the bank, to help it feel awesome. That there are no advantage-granting or Help-action-improving features is the big surprise, given the archetype concept.

This brings us to the end of the massive History of the Fighter series. Oh, sure, something could come up that compels me to add just one more article, in the same way that Matthew Colville is conspiring (ahem, without his knowledge or intent) to make me write another article in the Domain Rulership series. Done for now is enough.

The central trend of fighter design is the understanding that it’s so hard to say anything definite about the fighter beyond raw combat potential, more so than any other class. It’s still the nominal class for an Everyman Action Hero, for knights and soldiers and street brawlers and so on. I do think 5e’s choice to get rid of the last vestiges of alignment requirements for paladins alters the dynamic of the fighter – more of the knightly concepts get lured into paladin than before. (Also, the text does a better job of nudging paladins away from being Lawful Stupid or otherwise unpleasant.) Knights do still fit in fighter, but paladin doesn’t feel as forbidding as it once did.

From OD&D through 3.5, the fighter class rarely had any mechanics or class features beyond hitting often and hard, and assuming that would be enough. 3.0 brought in the era of fighters learning more of the tricks that everyone could manage. 4e gave fighters unique mechanics, chiefly in the form of their marks – the fighter’s attack powers were technically unique, but realistically just remixes of what was offered to everyone. They’re no longer a blank slate of weapon prowess – they’re defenders. The other big arc of the class’s design is the rise and fall of Weapon Specialization as a concept.

Bounded accuracy also means that, with the exception of Archery, classes are all roughly on the same footing when it comes to landing their attacks. You’re not looking at a fighters or warriors having 3-5 more points of attack bonus than everyone else. Giving them more attacks per round than anyone else, even other warriors, points all the way back to 1e and 2e. It doesn’t have the overtone of “I’d be a different class if I had better stats” that we saw in those editions, though.

Similar to monks with Flurry of Blows, but even more so, the 5e fighter is all of those action heroes that shift to bullet-time style and strike so much faster than anyone else can even watch. That superior number of attacks means that by 17th level, they have an untouchable lead in sustained and burst damage output compared to other warriors, balanced by the various tricks and defenses that other classes get.

Now that there are a wider array of Martial Archetypes, the fighter’s player can choose based on a gameplay model, an expression of theme, or a blend of the two. The Champion is always going to be there for players that want to keep it as simple as possible. This class has always been an on-ramp class for new players, and part of the Champion’s job is to maintain that legacy.

No class will ever be closer to my heart than wizards, but I’ve never been happier to play fighters than I am in 5e. (That means it’s equal to the excellent 4e fighter.) The linear fighter/quadratic wizard problem of OD&D thru 3.5 is not really in evidence here – there was plenty of reason to worry it would come back in 5e’s return to a more 3.x-like structure of spellcasting.

Thanks for coming with me through the History of the Fighter! The next History of the Classes will be a shorter series on marshals, warlords, and other nonmagical warrior-leader classes, subclasses, and builds.