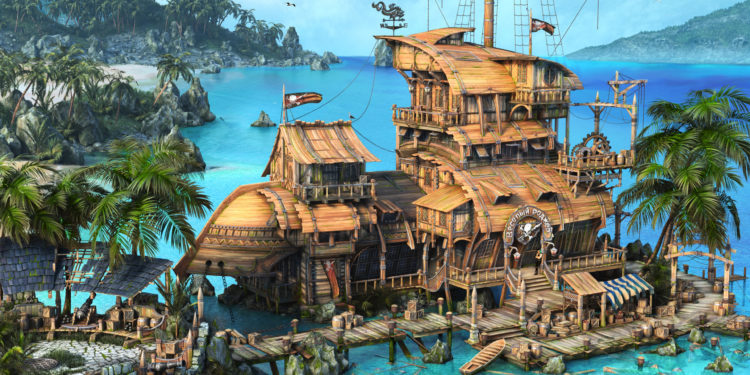 You enter The Smelly Cod, a tavern near the port looking for information and someone to get you across the ocean. As soon as you open the door, creaking while it is being opened, all sea chanties, all laughters and dancing stop. Suddenly, all eyes are put on you. What do you do?

Elf from a noble family while raising a gold coin: Ok everyone! The thing is simple. I’m going to give ten gold pieces to the first person who can give me some valuable information

A shot is heard from across the tavern. The bullet impacts the tip of your fingers leaving a burn mark and sends the coin flying. That’s when a raspy voice can be heard from a goliath woman across the room:

“You are in no position to be making such requests. Now, if you still want to get out of this place with that information and no hole in your chest you will need to enjoy some Pirate’s dice with me.”

Oh boy, this year started excellently by giving us lots of sea and pirate-themed surprises! I decided to get ready in my own way by creating some stuff for them. Having already done some random Encounters for both Cities and Sea travels I thought about doing something similar to what I recently did with the Tavern minigames but specifically for a pirate-filled one.

So, grab yourself a copy of Ghosts of Saltmarsh or the Seas of Vodari Campaign Setting, and without further ado, let’s add some minigames to your taverns:

Ship, Captain, and Crew is such a simple dice game you can teach your players how to play it in about 5 minutes. That’s about one of the best things about it, as the simpler it is, the higher the chance the characters will be interested to learn how it works. Works excellently both either as a drinking or gambling game.

For this game each participant needs to have 5d6 to play with, and understand what these numbers mean:

During your turn, you can roll up to a maximum of 3 times. As everyone knows, a crew can’t work without a captain, and a captain can’t either if it does not have a ship. This means that every time you roll one of the three numbers mentioned above you get to set them aside. However, you can’t do this with a 4 if you haven’t rolled a 6 and a 5 beforehand; just like you can’t set aside a 5 without having got a 6 before. Once you get the three numbers, you can roll the rest as much as you want within the 3 rolls mentioned before. These two last dice are always rolled together and you cannot conserve a previous roll. The result got from these last 2 numbers is the amount of points you get. After doing this, the following person that gets to play its turn is the one located clock-wise.

That’s about it. The round is completed when every player got to have its turn once. After this, the one with most points gets to receive all the money, or the losers get to drink if it is being played as a drinking game. If two or more players end up with the same number of points, all of those who tied get to play an extra turn to decide the victor. 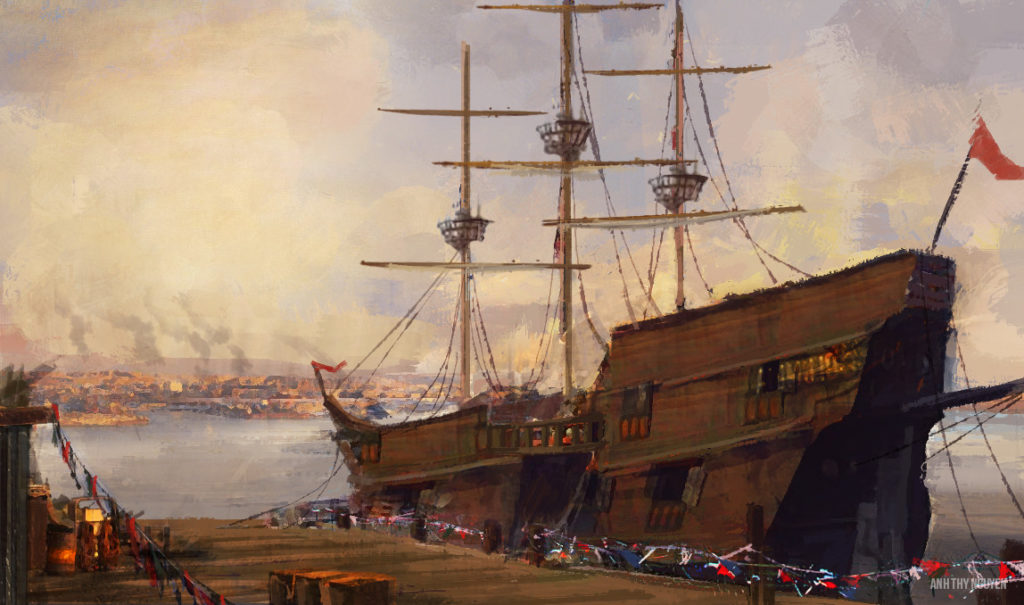 Art by Anh Thy Nguyen

Pirate’s dice as they are known in South America, or Liar’s Dice as it is known in most of the rest of the world is another very simple dice game that besides being shown in media quite a lot (Pirates of the Caribbean and Red Dead Redemption for example) it is a really fun game to play. Just like with Ship, Captain and Crew, it goes extremely well with pirate-themed cities or campaigns.

For Pirate’s dice (I’ll keep calling it that way because I like it better than Liar’s Dice) you only need 5d6 per player and (optional) a dice cup. It is normally a 3 player game, but I’ve played it with 4 without much of a trouble, though 3 players is still the ideal number.

Every player rolls its dice without showing the numbers they got to any of the other players. Whoever is the oldest gets to start bidding by trying to guess at least how many dice are showing a specific number between all the dice at the table (e.g. “2 sixes”). The bidding goes on clockwise by having each player raise the amount of dice showing the number, or saying that another number has that amount of dice showing it (always raising the sum of dice by 1 at least). If one of the players considers that the last bid raised is ridiculous it can yell “Liar!“. When this happens, all players show their dice and if the yeller was right, whoever raised the last bid loses a die and the game starts over. Likewise, if the yeller was wrong and the told sum is, in fact, less or equals to the amount of dice with the said number, then it is the yeller who loses a die. The last person holding a die by the end of the game is the winner, while everyone who runs out of dice gets eliminated from the game. 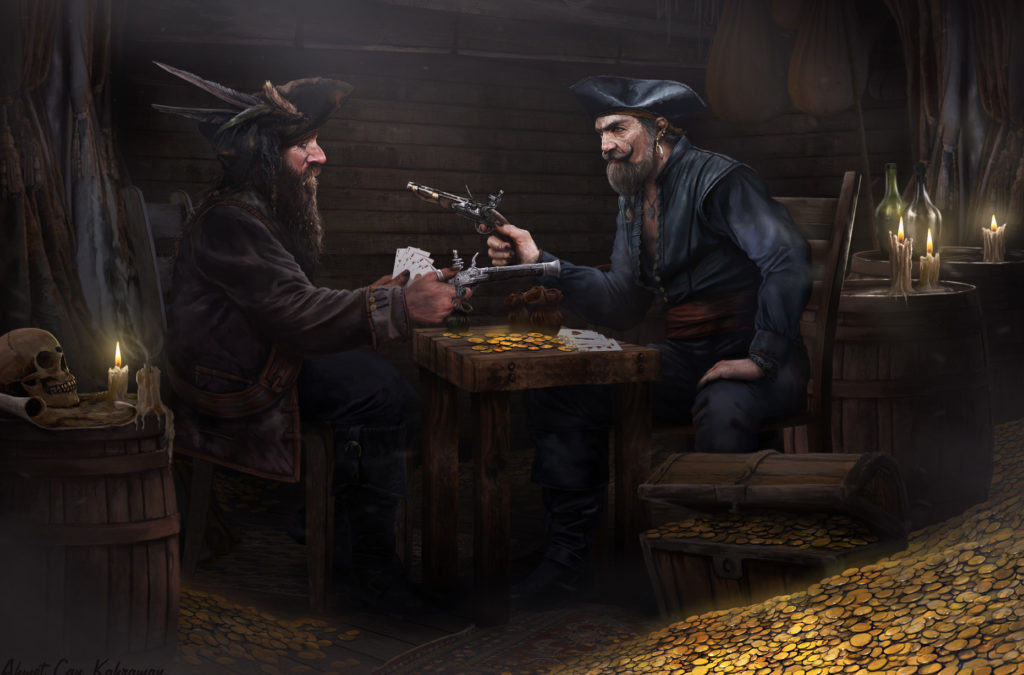 Art by Ahmet Can Kahraman

Ohhh, the classic pit fights. They are normally a must-have at least once per campaign, and just like with all the others, it’s extremely easy to add them in a pirate-themed tavern. If you want to go with a bigger approach and create a Tavern Brawl I would recommend checking this out, but if what you are going for is something smaller continue reading:

We want to make it unique for this sort of tavern we are using. Pirates are widely known for being cheaters and experts with both spades and guns. I will not provide many rulings for this as it should be treated in the same way normal combat does. What I will be saying, nevertheless, are some tips for making pit fights feel more piratey.

Don’t be so close-minded as to think of only having weaponless pit fights. Rapier battles can be played in a similar way to fencing, as well as you can have bloodier battles by using shortswords o even guns. Want to embody in a better way the pirate NPCs? Make your players fight some in the traditional manner, by only using fists. By the time the enemies are about to lose, make those pirates use some hidden gun or blade to do some heavy damage, or have a whole pirate crew come to intercept the fight and destroy the player character. 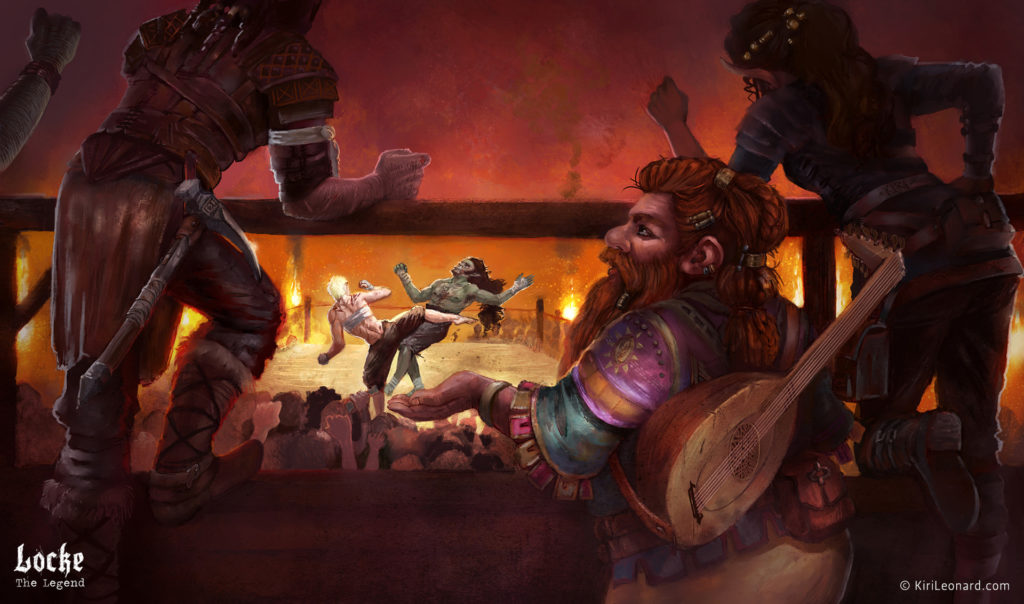 A pirate-themed tavern is where all the fun and danger is supposed to happen! By making use of these and the other ones from my other post you shall have an excellent one in no time. Have you used some other minigame of this kind in your taverns? Let me know in the comments!

Do you want to add some mafia-like organization to roam around your pirate city? Why not check this out?