Sea – Themed Puzzles for your adventures 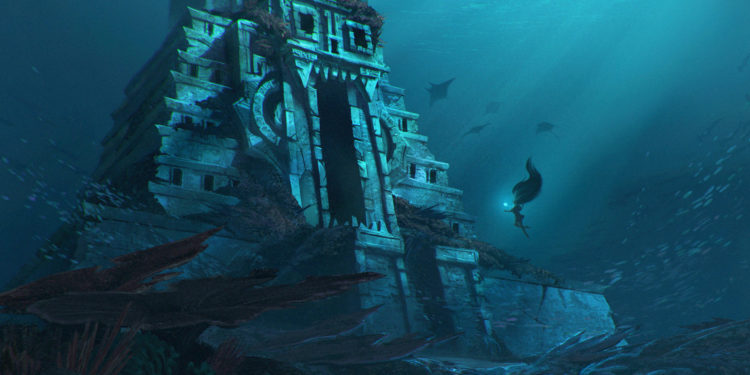 Ghosts of Saltmarsh is right behind the corner. While we wait for it, why don’t we immerse ourselves in the seas and look for some puzzles for our players to deal with? The following 3 puzzles are thought out to work in seafaring campaigns, such as the module I just talked about, your own homebrew world or even a campaign set in the Seas of Vodari Setting. However, they are easy enough to change in a way they can fit your current setting.

Notice I did not talk about the treasures or traps that might appear when trying to solve the riddles or puzzles. This is in order for you to make it fit your current session in a better way, as well as to give your players the treasures you think would fit best their actual level.

If you are looking for other posts for your seafaring campaign be sure to check my other posts:

Captain Goldbelt does not want no dumb brainless bastard pillaging his place. Want thee his treasure hoards you need to complete the pyramid by placing the right coins in the right place while havin no same ones toch each other. Whatz it that goes in the mysterious circle? Shall ya be mistaken, the curse will have that you love taken. 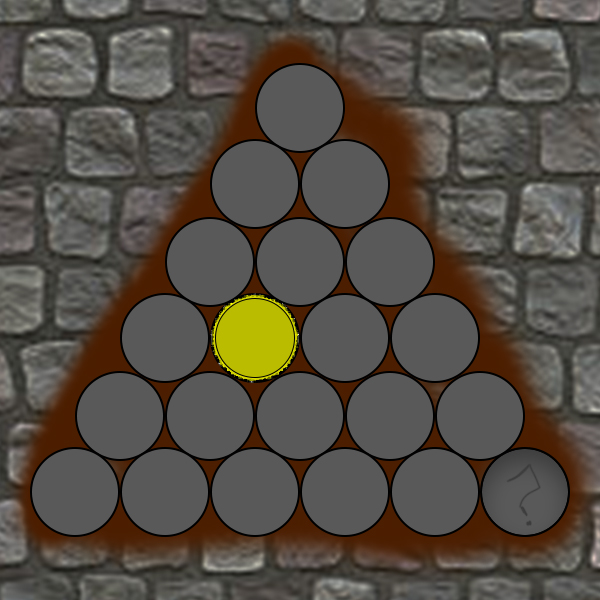 The players find this in a wall, with an inscription next to it containing the riddle I wrote above. All the circles are just drawings in the wall, except the yellow one, which has a gold coin inserted in an orifice within the surface, and the circle in the bottom right. The gold piece is glued to the wall with Sovereign Glue making it impossible to be removed. The other circle is another orifice, with enough space to place a coin in it. A question mark is carved in its interior. In front of this wall, a pedestal lies in the center of the room with a gold piece, silver piece, and a copper one placed on top of it.

In order to solve this puzzle, a player must locate the correct coin in the circle from the bottom right. No two coins of the same type can be located contiguous, making it only able to have one solution. The answer to it can be seen in the picture below, with the three letters meaning G(Gold), S(Silver), C(Copper): 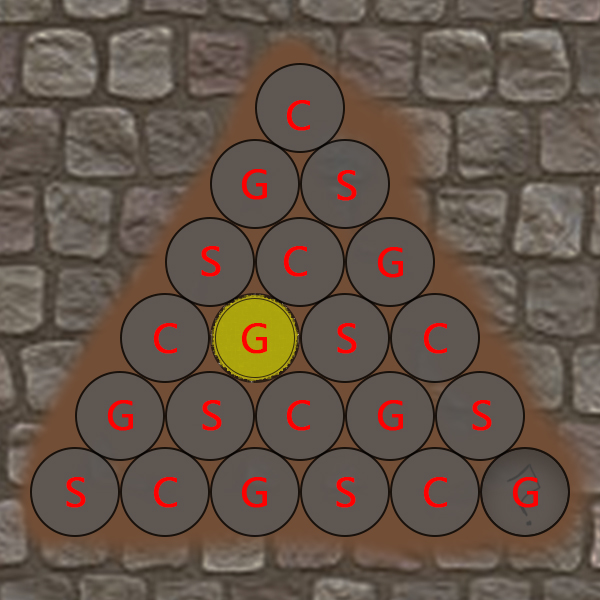 In conclusion, placing the golden coin in the bottom right circle would complete the puzzle.

Puzzle 2: The assassin within us

Malentis* have infiltrated our homes in the past. Were you worthy of our treasures you should be able to identify one if it was between the subspects of an assassination crime. Finish the liar, as it surely is the killer. Shall you make the wrong choice, consequences will fall upon you.

* Malantis: Sahuagin born in a different way that looks just like a Sea Elf. These are normally used as spies to infiltrate elven societies and kill important targets between their communities.

4 statues symbolizing Sea Elves stand next to a wall, one next to the other, with symbols carved in their bases. These are the letters A, B, C and D written in Elvish writings. An orifice is located in each of their necks, big enough for a dagger’s blade to fit in.

A dagger is located right in front of the statues, lying on the floor. It looks ornamental due to its beauty but the blade can leave a cut by simply touching the border.

If one or more players stand in front of one of the statues, they will begin speaking by triggering their Magic Mouth‘s spell. Their phrases sound in elvish and say the following words:

A : C was with me when the assassination happened, so he can’t be the culprit.

B : D is known for never ever telling lies.

C : I was accomplishing a very important task at the time, which makes me innocent. D is definitely the assassin.

D : A was acting very suspicious right before we were noticed of the crime. I’m pretty sure A did it.

There is one possible solution to this. As we can guess by only having one dagger there is only one culprit. If only one is the assassin, then only one of them must be lying. The only possible way for there to be an only liar is for D to be the assassin. Even though B says that D is known for never ever telling lies, that does not mean D is not lying. Place the dagger in D’s neck and complete the puzzle. If another dagger is used trying to cause the same effect, that dagger will not trigger the result. Only the dagger from that room can be used.

The adventurers find themselves in an underwater temple or sank ship. A great barrel weighing 300 pounds lies in a section of the place. A label is inscribed in it that says “Barnacle Ale. That which a captain must have in hand before sail”. It has a tap on one side to pour yourself a bit from the drink. On another separate room, there are many pirates (including a captain) all petrified in place (or maybe they are statues, who knows?). All of them have a tankard in hand and have it raised as if celebrating for something. To reach from one room to the other one must go through a spinning blade, which activates when someone stands 10 feet near it. If someone is within that range, that person must make a DC14 Strength (Athletics) or be sucked in and receive 22 (4d10) slashing damage from the blades.

A secret door opens when ale is added into the captain’s tankard. The label in the barrel works as a clue for what must be done. The door can be noticed with a DC14 Intelligence (Investigation) check, but cannot be opened unless the puzzle is solved. If players have no idea how to continue give them clues by making Intelligence or Wisdom (Insight) checks.

There is no unique way to solve this puzzle. That lies within your players’ imagination and trouble solving skills. The real difficulty is that being underwater makes it extremely hard to transport liquids. If players plan on leading the ale through water currents remember the spinning blade will make it extremely difficult for them to reach the other room with it. For some extra fun, start a timer each time they spill some ale in the water. By the time it hits 0, the drink will have fully dissolved, making them have to start again. 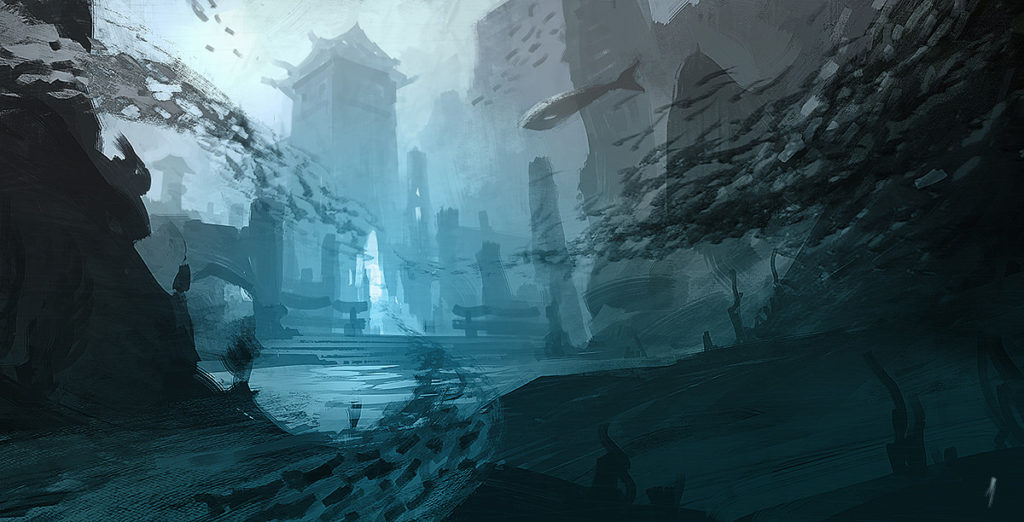 Lots of players do love good puzzles and most of the times it’s the easier ones that takes them the longest to solve. Some other player groups don’t enjoy puzzles that much though so you must always be careful with that, and be benevolent enough to give clues in exchange of checks if they start getting stuck.

I might write more puzzles if people are interested enough as I still have some extra ideas. What’s more, puzzles are something not many people talk or write about, even though many consider it something that goes extremely well with D&D. Due to my love for them, and its shortage in the web, I might end up writing more about them in the future.

Did you find one or more of the puzzles difficult to understand? Are you eager to put them in your next session? Do you remember some good puzzle you will never forget? Tell me all about these things in the comments below!

Do you love underwater mystery and all the Lovecraftian’s Cosmic Horror that lies within it? Why not give a try to the Call of Cthulhu RPG? You can find more about it, as well as my experience with it (and why you should try it!) over here: CLICK HERE