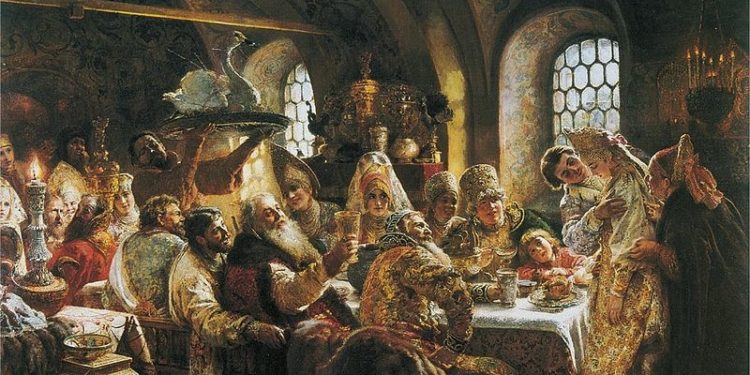 For the most part, religions and belief systems are things we experience as a mostly passive participant in their development in our daily lives. Many of us are indoctrinated into a religion or belief system from an early age, partaking in the feasts and festivals, tenets of the faith, factions, and flaws of the religion without question. Unless we take the time to sit down and question what we believe or have an opportunity to take a “comparative religions” class, we stick with that selfsame beliefs.  The reason for this may be as simple as “I grew up with this, therefore I am comfortable with it” to as complex as “I have done the research, the soul searching, as well as the thought and behavioral modifications this religion requires of its adherents and I feel that it is the truth.”

Many of the feasts or festivals that religions partake in are actually holidays use food and alcohol to bring remembrance of the reason for the holiday. In Judaism, you have the Passover feast, which is an echo of what is to come in communion in Christianity. But holidays aren’t the only reason for feasts or festivals. Some of them are based on such things as a good harvest, converting others to one’s deity, a successful raid of a neighboring village, returning home safely, or getting a new place to call home. Some of these (perhaps many, depending on the religion) are in turn given religious significance later on, with the participants saying my god helped me be successful in this venture therefore let’s dedicate a feast or festival to him or her. Religions can also borrow or outright steal the ideas of feasts and festivals from other religions. Many aspects of how American Christianity celebrates are actually taken in whole or in part from pagan celebrations. Festivals can have a stand-alone nature as well, based on the cultural identity. For instance, in modern times, during the summer months (especially in Chicago) there are quite a few pop-up festivals that have parades, live music, ethnic foods, and sometimes such things as art fairs, carnival rides, animal contests, livestock judging and kid’s activities.

Some questions to ask yourself when designing feasts and festivals:

Tenets of the Faith

Tenets are principles or beliefs honored by a person or, more often, a group of people. These tenets are the cornerstones of religions and religious life. In real life a reasonably simple tenet of the faith can be seen by looking at the TULIP acrostic of Calvinism,  which stands for:

Other systems of faiths have quite a few more points to them, and others may be simpler as in the Hedonist credo: get (and give) pleasure while avoiding pain.

By looking at the alignment, portfolios, and powers of a fictitious religion, one can figure out (or approximate) its tenets. Here’s some questions to get you started:

Religious factions occur when there is a disagreement or dissent among the followers of said religion. Another term for this is a religious denomination which is a subgroup within a religion that operates under a common name, tradition, and identity. According to Wikipedia, the term refers to the

various Christian denominations (for example, Eastern Orthodox, Roman Catholic, and the many varieties of Protestantism). It is also used to describe the four branches of Judaism (Orthodox, Conservative, Reform, and Reconstructionist). Within Islam, it can refer to the branches or sects (such as Sunni, Shia, and Ahmadiyya) as well as their various subdivisions such as sub-sects, schools of jurisprudence, schools of theology and religious movements.

Some factions may be considered by others to be a sect or cult. While this discussion is too lengthy to get into in this article, you can see what Wikipedia says about the distinction between a denomination and a cult is here.  Quora also has some answers on the distinctions here.

Here are some questions to separate them from one another:

There are a variety of religious flaws based on what religion is. Religion, the texts thereof, the practices, the beliefs, and the followers all constitute a statement of “This is / these are the truth(s) that you should follow in order to live a ‘good’ life.” Note that the ideas of ‘good’ may, in fact, be more harmful then beneficial both on the individual level and to that of the society as a whole. Even in a fantastical world of multitude of gods that interact with people on a daily basis, these ideas are up for criticism, among which are its ideas, validity, or the practice of religion, including its political and social implications. Critics of religion in real life often regard it as outdated, harmful to the individual, harmful to society, an impediment to the progress of science, a source of immoral acts or customs and a political tool for social control. In a fantasy setting where the gods are active in daily life not all of these types of criticisms may be valid, however.

Ask yourself the following questions when deciding to bring up the flaws of the faith in your game:

A religion’s feasts and festivals, tenants of the faith, factions, and flaws are only some of the aspects of what makes a religion a vital and living part of your game world. Use these ideas to develop your own in-world religions, scriptures, practices, and believers, remembering that the more detail you’re able to inject into your game(s), the better the experience will be!

Duels that are Fun for Everyone at ...