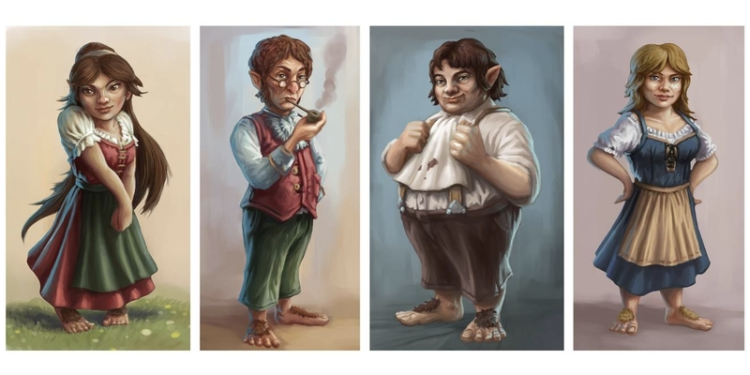 Roleplaying a halfling lets you be a character who charms the hat off a wizard or lets their luck see them through a hairbrained scheme. While in earlier versions they were essentially hobbits ripped from the pages of the book, as the editions progressed so did the halfling. Halflings are always fun to play, and today we’ll explore some ways you can play your next halfling character.

Halflings are generally stereotyped into two archetypes: the expert thief, and the unwitting hero from the countryside.

Where ambition might drive humans, halflings are driven by a deeper need for discovery. Halflings embody a buoyant positivity that gives them the resilience to help keep the party going in the darkest time.

Of course, all of these general characteristics can be played against. A goth halfling warlock whose idea of a good time is hanging out in a graveyard sounds like a fun character to play.

The Player’s Handbook gives the following bits of key information about halflings:

A lot of these aspects of being a halfling give a lot of reasons why you wouldn’t adventure as a halfling. After all, why leave the comfort of home to risk life and limb for gold when cold can be made by selling the local humans “authentic elven wine”.

But if we flip these traits on their heads we can create a compelling backstory for a halfling character.

What if your halfling isn’t the kind, happy-go-lucky halfling presented in the PHB? What if they grew up in a harsher part of the world, where you could really only depend on yourself? I can imagine that the loss of an idyllic home could lead to a life of revenge or seeking justice.

Maybe your halfling just became bored with the pastoral life of their childhood and wanted something more exciting.

Halflings exist in the in-between spaces of civilization that gives you a lot of interesting roleplay hooks. They are the middlemen, the go-betweens, and therefore information brokers. They are ever-adapting, and perhaps are the best to go-to for the latest news, rumors, or gossip.

Perhaps your character is always making friends, learning the latest gossip. Or, aware of the stereotypes of your people, actively avoid or play against those stereotypes, refusing to participate in trade, or wears garish clothing and is driven by greed.

Now we’ll take a look at the roleplay possibilities offered by the mechanical traits of halflings. The most salient traits shared by both variants are Luck and Brave.

Luck allows you to reroll ones, and Brave gives you advantage on saving throws against being frightened.

Your innate luck can be expressed in your backstory, with a chance encounter or near-miss putting you on the trajectory to the adventuring life.

Halflings also speak the Halfling language, which is all but a secret from other races. Consider what this might mean to your character. Perhaps they will feign ignorance or deny outright that halflings speak any other language than Common, knowing people are afraid of what they find to be alien.

Lightfoot halflings are better able to blend in, being naturally stealthy and more charismatic. Lightfoot halflings make fantastic face characters for your party, cheerfully engaging equally with townsfolk, merchants, and kings. They also make very good stealth characters, easily able to blend in when only hidden by a larger creature. Lightfoots are also more prone to exploration and wandering.

Stout halflings are hardier and resistant to poisons. They are great for characters who eschew the charismatic fast-talking middleman style of other halflings. These halflings strike me as being more likely to be dedicated to a cause, to weather the trials of the life of an adventurer in order to accomplish a quest.

Making your halfling stand out

While experts at blending in, here are a few questions to ask yourself to make your halfling stand out: