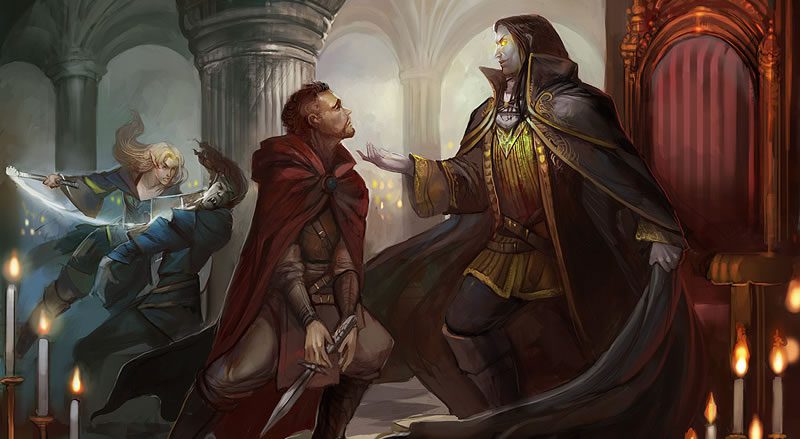 In our final article of this series, we’ll take a look at a group of monsters so varied and vast that many campaigns have been made to solely fight the scourge that is the undead. Undead are so versatile because you can take any living monster and throw in some necromancy and boom! You have yourself a new potent threat to throw against the party.

You can check out previous articles in this series where I cover every monster type: Elementals, Constructs, Aberrations, Beasts, Celestials, Fey, Fiends, Dragons, Giants, Monstrosities, Plants, and Oozes.

Undead as Monsters of the Week

There’s almost too many to include here so today I’ll highlight my top five favorite undead to use as a monster of the week.

I have a deep love of skeleton monsters (thank you Skeletor!) and nothing beats the classic Skeleton. While a very basic and easy to kill monster, a horde of skeletons going up against a low level party can make a very dangerous encounter. Additionally, the skeletons will pantomime behaviors their bodies did in life, which you can use to heighten the horror of an encounter when the party realizes that the skeleton guarding the tomb has the mannerisms of a favorite NPC.

Newly introduced in Van Richten’s Guide to Ravenloft, the Boneless are a floppy inverse of a skeleton. They smother their victims and can even ride on other undead, acting as a secret skin. These creatures are perfect for a campaign where the Big Bad is a necromancer. Boneless running (flopping?) around a village can be a great reason for adventurers to investigate things.

A ghast is a souped-up version of a ghoul, leading them into battle and coordinating their attack. With a stench that can poison a player character, and claws that paralyze, ghasts make great enemies to throw against a party, especially in combination with other undead. They have the intelligence for planning and coordination, making them able lieutenants in a necromancer’s army.

Flameskulls are created from the remains of powerful wizards and have a number of abilities that make taking them on a dangerous proposition. Usually set to guard its master’s demesne, it can do so capably with magical resistance, rejuvenation, and an array of damaging spells plus a fire ray it can use twice. And who doesn’t like a flaming, floating, screaming skull?

Bodaks hail from the Shadowfell and have a powerful gaze that can incapacitate any player character who fails a Con save. They are some of my favorite undead just because of how deadly they are and how the party has to figure out how to fight something without looking at it. They are some of my favorite monsters to use because they damage the soul to the point where only a wish spell can resurrect a character.

Undead as the Big Bad

Alright, well we’re here at the last Big Bad of this series. With the Undead monster type in Dungeons and Dragons, you have so many options for a big bad: Vampires, Liches, Dracoliches, and more!

But they all have in common a throughline of being very ancient, very powerful undead. These creatures likely have the following at their command:

They could also have been alive for so long that whatever reason drove them to become a vampire or a lich is since long forgotten. They may now be simply trying to become a god or escape from one of the realms of dread that Van Richten’s introduced.

When it comes to running an undead as a campaigns’ big bad, give the player opportunities to unravel the Big Bad’s backstory. Perhaps they find a weakness or a way to foil the villain’s plan.

And if your villain has access to scrying spells, consider how they might use it to watch the party’s actions. Maybe they want to retrieve a token of the party to help focus their spell. What contingencies do they have in place that the party might learn about and disrupt?

Ultimately, if you’re going to build to a climactic showdown with a lich or vampire, you can make it more epic by giving your players options to prepare for the battle. This can even form the basis of an entire campaign of dungeon diving to try to find a weakness in the Big Bad’s defenses.

Thank you all for joining me on this exploration of monster types. You can check out previous articles in this series where I cover every monster type: Elementals, Constructs, Aberrations, Beasts, Celestials, Fey, Fiends, Dragons, Giants, Monstrosities, Plants, and Oozes.

Art credit Wizards of the Coast