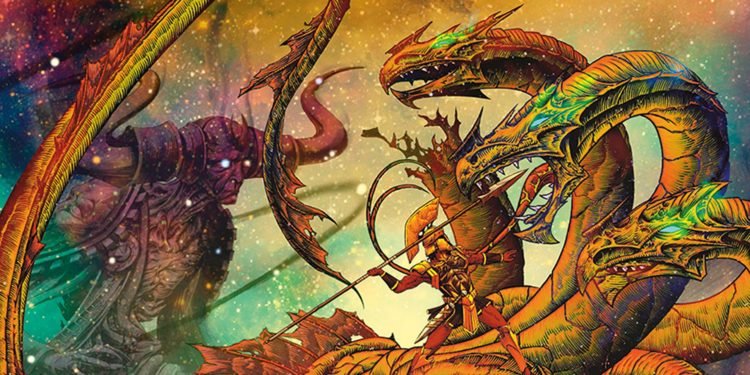 This week we take a look at one of the broadest categories of monsters in Dungeons and Dragons 5e: Monstrosities. The introduction to the Monster Manual defines monsters as being “frightening creatures that are not ordinary, not truly natural, and almost never benign… and in some sense serve as a catch-all category for creatures that don’t fit into any other type.”

This category has the most potential to provide a monster of the week for your campaign, whether you’re building a random encounter table or looking to add some local side quests to a region.

You can check out previous articles in this series where I cover: Elementals, Constructs, Aberrations, Beasts, Celestials, Fey, Fiends, Dragons, and Giants.

Monstrosity Monsters of the Week

I have fallen in love with Gremishkas since the release of Van Richten’s Guide to Ravenloft. These tiny products of erroneously cast spells are allergic to magic and have 3 potential effects that can trigger whenever a magic spell is cast within 30 feet of it. They even come in a swarm variety for even more mayhem. Throw a few of these in an abandoned wizard’s laboratory and bam! Instant fun.

Cockatrices are gross lizard-bird-bat hybrids that can petrify players with a bite. The petrification is somewhat tame, as it only lasts 24 hours. I’ve used them in my campaign to teach some new players about the potential dangers that a monster might have beyond inflicting raw damage. A pack of cockatrices can cause an entire village to be turned to stone, or perhaps be left to guard a cache of magic weapons.

A classic monster that has appeared in many adventurer’s nightmares, the rust monster corrodes nonmagical ferrous metal objects, potentially wiping out a low-level party’s weapons. They are fantastic monsters to feature in urban environments or in the Underdark, and are one of those monsters that are sure to win player’s hearts and potentially become the campaign mascot.

Mimics are another classic monster that can easily be fit into almost any session. A rich merchant might have their most treasured possessions guarded by mimics, or perhaps a plague of mimics has infested a merchant town, resulting in people going missing. You can expand upon a mimic from just a single object to potentially an entire town.

The hydra offers a difficult monster to defeat with its regenerating heads, and its extra opportunity attacks, it can be left behind in a swamp or other watery area to guard something or perhaps let loose after its owner realized they couldn’t care for it. They can also be found in places like sewers or even invading manicured gardens.

The behir is a lighting breathing lizard-like creature capable of swallowing players whole. They can hit hard and make their lairs in caverns and other inaccessible places. They also have an intense hatred of Dragons and can be great enemies for a good dragon to ask the party to take care of. They also can be sources of components needed for magic items based around lightning.

The granddaddy monstrosity, the Purple Worm is a fearsome foe that can tunnel through solid rock and bite and sting. They, like behirs, can swallow players whole and can be found burrowing in almost any environment. The tunnels left behind by a purple worm could be expanded and used to open up a new mine, or perhaps as a passage into a secret tomb.

Monstrosities as a Big Bad

The monstrosity monster-type offers no shortage of monsters that could easily be at the center of your campaign. From the unkillable Tarrasque to the slimy Kraken, any monster could be the Big Bad of your campaign. Just because they are monsters doesn’t mean they can’t plan and scheme with the best of them.

Like any big bad, give your villain a strong motivation, whether that be to consume the world’s magic, or dominate lower forms of life. Extremely powerful monstrosities could be created by magic users and then turned on the world or escaped the control of their creators. They could accumulate a cult of humanoids who hope to acquire part of its power or be responsible for the creation of a race, such as the sahuagin.

This particular monster category is very versatile and limited only by your imagination. Whatever you decide to throw at your players, find a way to have your big bad’s motivations run counter to that of your players.

Next week we’ll look at the most feared of all monster categories: Plants!!

You can check out previous articles in this series where I cover: Elementals, Constructs, Aberrations, Beasts, Celestials, Fey, Fiends, Dragons, and Giants.

Image credit: Wizards of the Coast